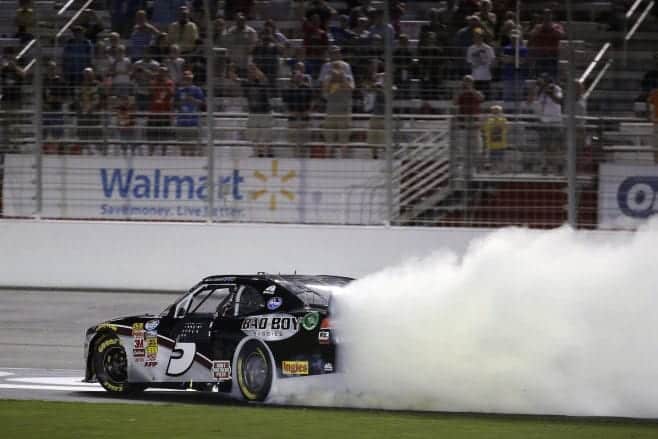 JR Motorsports was dominant on Saturday evening at Atlanta Motor Speedway. Kevin Harvick piloted the No. 5 Chevrolet to Victory Lane as he set the pace throughout the 300-mile event. Making his 11th NASCAR Nationwide Series start of the year, the 38-year-old won his third race of the season for Dale Earnhardt Jr.’s organization.

Harvick and his teammate Chase Elliott led every one of the 195 laps at Atlanta in a race that saw just two caution flags. After he passed the Sunoco Rookie of the Year candidate for the lead, he never looked back. With his victory, the California-native tied Mark Martin with the most all-time wins at the 1.5-mile track as each have three triumphs.  Qualifying eighth wasn’t much of a challenge for Harvick and the No. 5 team led by Ernie Cope as not a single lead change took place besides the one on Lap 37.

During the caution period for debris on Lap 120, rain started to appear in Turns 1 and 2. NASCAR waved off the restart multiple times, but eventually the race resumed and went green for the remainder of the way. The caution shook up fuel strategy, yet all of the lead lap drivers came onto pit road with approximately 20 laps to go.

The race lasted approximately two hours and 15 minutes due to the extended caution laps when it began to rain. Having just one lead change in the race, the Nationwide Series set a record-low for 1.5-mile tracks during Saturday evening’s contest. The previous record-low of lead changes at Atlanta was eight back in 1998.

Elliott continues to lead fellow JR Motorsports driver Regan Smith in the championship standings. Although he overran his pit stall during the final green-flag cycle, the pole sitter finished inside of the top five for the 11th time in 2014. With a 15-point gap over Smith, he is slowly extending his lead with nine races left in the season. Ty Dillon sits third in points – 35 markers behind Elliott. Elliott Sadler and Brian Scott round out the top five in the standings as each are over 40 points in the hole. Trevor Bayne, Chris Buescher, Brendan Gaughan, Ryan Reed and James Buescher remain as the rest of the top 10 in points.

JR Motorsports continued their hot streak during Saturday evening’s race. The organization has now won eight events in 2014 – one-third of the schedule thus far. Although they have shown they are capable of winning races in the past, the Chevrolet team has never taken the checkered flag in more than four events in one season since Brad Keselowski raced for the organization in 2009.

Elliott is on pace to win the championship in his rookie season. Scoring his first career pole at his hometown track on Saturday, the 18-year-old proved he is one of the strongest drivers on the intermediate tracks. In nine tracks of 1.5-miles in length or larger (not including plate tracks or road courses), Elliott has two victories with top 10 finishes in two-thirds of those events. However, he is losing Greg Ives as his crew chief at the end of the year. Next year, he will be working with Cope, who substituted for Ives earlier this year at Road America.

Trevor Bayne struggled with a loose condition during the 195-lap event in his Roush Fenway Racing Ford. Bayne wasn’t horrific during the pair of practice sessions on Friday, yet he fell back rapidly on Saturday evening. After qualifying seventh, the 23-year-old finished 12th – two laps down in the No. 6 car. Although he didn’t lose any positions in the standings, Bayne now sits 71 markers behind Elliott for the title lead, and is all but out of contention for the championship.

Three drivers had engine issues that ended their respective evenings early. Carlos Contreras, making his 11th start this year, blew an engine on Lap 35 for Rick Ware Racing. Dakoda Armstrong, driving for Richard Petty Motorsports in the No. 43 car, continued his rough season – finishing 33rd after pulling into the garage once he completed 129 laps. John Wes Townley was the final driver to have an engine let go on his machine. Townley, racing for his family-owned team at his home track, was running inside of the top 20 until his engine let go on Lap 157.

Dylan Kwasniewski had another mistake on pit road at Atlanta. Kwasniewski has been deemed pit road speeding penalties on multiple occasions this year for his Turner Scott Motorsports squad. The Rookie of the Year candidate was having a solid top 20 run until he received the black flag, which put him back in the 21st position, five laps down.

Elliott Sadler and Matt Kenseth both struggled for Joe Gibbs Racing during the race. Both drivers were seemingly strong on the short runs, yet each fell outside of the top 10 during the race. Sadler came back to finish 10th, but finished off of the lead lap for the sixth race this race and third event in a row. Moreover, they continued the organization’s weak points on the intermediate tracks as Kyle Busch also had handling issues throughout the race.

David Ragan had a strong run for Biagi-DenBeste Racing in the race. Growing up less than one hour from the speedway, the hometown favorite finished the evening in the eighth position. After running inside of the top 10 throughout the event, he never fell off of the lead lap.

Ending the evening with a top 10 result, the former Roush Fenway Racing driver earned his second top 10 this season in six Nationwide Series race. Since the Biagi organization came back into NASCAR competition in 2012 after taking a hiatus since 2006, they have five top 10 results – two of which came with Ragan this year and the other three with Kevin Swindell in 2012 and 2013.

Seven of the 40 drivers entered in the race are full-time drivers in the NASCAR Sprint Cup Series. Along with those drivers, Ty Dillon is using Atlanta as his first shot at running double duty. Dillon, 22, is racing the No. 33 Chevrolet in the Cup Series at Atlanta for Richard Childress Racing in conjunction with Circle Sport Racing.

With just one lead change on Saturday evening, Atlanta might be looking forward to moving their race to early March. The Nationwide Series event will be held on the same day as the Camping World Truck Series’ return to the intermediate track, and that could be a big difference in the competition at the track.

During the Great Clips 300, the low groove proved to be vital for drivers. The high line did not get going on the restarts, and that made several drivers fall back on

the short runs. The lack of speed in the high line was rather rare for a 1.5-mile track, and that agonized drivers such as Busch and Kyle Larson – who usually utilize the high line to gain momentum on the straightaways.

As the season comes to a close, the championship battle is getting more intense. It appears to be that the JR Motorsports duo is showing their strengths now more than ever. However, Dillon has been right with them and is still carrying the momentum from his victory at Indianapolis Motor Speedway.

Next weekend, the series hits the .75-mile track in Richmond – a race which JR Motorsports also dominated earlier this year. Now that Elliott has stretched out the gap on Smith, he does have a little comfort room if he were to make a mistake. Moreover, if he were to make a mistake, Smith, Dillon or Sadler can rapidly capitalize. Smith and Sadler have plenty of experience compared to Dillon and Elliott, which could be the largest difference in the title chase.

A Cup driver dominates a NW event! Wow that only happens every week. A series that exists only Cup practice. Nothing that even resembles competition. No wonder the stands are full.

I’m 55 years old. I really don’t need a reason to fall asleep early on a Saturday night, but I got one anyway.