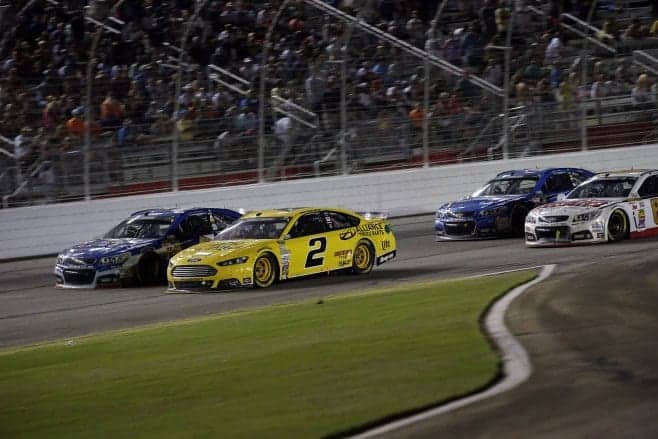 Kasey Kahne has built his Sprint Cup career on intermediates. While Richmond sits just a week away, the site of his first career win, it’s also the only track where he has won less than a mile in length. That made Sunday night’s mission clear, the second Kahne worked his way into contention in Atlanta: win or go home. Take control, in the backyard of young Chase Elliott’s hometown no less – a driver who one day may be replacing Kahne in that ride – or try and explain to the media how you missed the Chase in a year where your three teammates at Hendrick Motorsports have run roughshod over the competition.

“You just know that you have to win,” he said Sunday night. “I just kept saying, I have to win. It was all that I could think about [this week.] I knew Atlanta was a better opportunity.”

Kahne had been feeling the pressure, well aware of his predicament, with two races left to fix it. Coming off Bristol, the intensity between he and longtime crew chief Kenny Francis had risen to a level we hadn’t seen in years, the driver arguing on the radio and needing to take his car behind the wall at one point with a broken right front wheel, a breakage that happened in large part after shoddy handling. It was the peak of an impression that, at times this summer Kahne was starting to believe his mastermind on the box had lost his “magic touch” to turn the No. 5 car into a contender on command. Confidence, always hard to find with Kahne, had been crushed into consistent frustration. 10th, 12th, 16th, 35th… that’s not a resume of a driver that’s Chase ready, let alone one who wants a long-term contract extension inside a Hendrick Chevrolet.

Sunday night, at the start gave off much the same vibe on the radio, with Kahne enduring an up-and-down evening, bobbing from fifth to about 18th place. At one point, he even went a lap down after a caution during a sequence of green-flag stops, needing the wave around on a night where a dominant Kevin Harvick laid waste to the field for a large portion of the event. But in the middle of all that sprung hope; Clint Bowyer, breaking a shifter knob, got sent to the garage area, losing valuable points and making a Mount Everest-type mountain to the Chase that much harder to climb for the No. 15 team. Perhaps the No. 5 team, who had been stubbing their toe all August could sneak in the playoff through points after all.

That’s when crew chief Francis smelled blood, and as his driver responded, on the upswing (sixth) with less than 30 laps to go, a lucky caution forced his hand on strategy. Aiming for fuel only right after a sequence of final stops, giving the No. 5 car track position Francis bet on the resilience of his driver paired with clean air up front to hold off a dominant Harvick.

He was right. Even with Atlanta’s abrasive pavement, the aero advantage at these high speeds was good enough that Harvick stalled out the second he got to second place. Angry over poor pit stops, the night’s most dominant driver stood helpless as he was suddenly getting left in the dust.

“Well, you know, the 4 car, Harvick, was so good and then when he and Kasey were racing each other and Kasey was able to pull away from him about a 10th of a lap,” said owner Rick Hendrick, “I thought we were in real good shape.”

Kahne did the rest, a restart rhythm serving him well once a green-white-checkered threatened to take away the win. The No. 5 car, shuffled to midpack once again after a four-tire stop, caught a break, especially when main rival Harvick got shuffled up in an accident on the first green-white-checkered try. Kahne was then left in the perfect position of third on the second GWC restart, on the inside of the second row and ready to muscle its way through as only cars with older tires stood ahead of him.

“We took advantage of those,” Kahne said. “I was really happy that we did, because I struggle with restarts a lot.  That’s something that I’ve worked really hard on.”

“Kasey got rolling,” said Matt Kenseth, who was in the lead with two tires as the cars came up to speed. “Just drove up in between us and almost cleared me in 1 and 2, and I was able to get alongside of him and get a good run down the backstretch. I was planning on driving into 3 and waiting until he lifted and then go a couple car lengths and hope to clear him. But, we were in there so far, if I shot the corner any harder, I was going to shoot out the other end and he was going to pass me back.”

So Kahne shot ahead, leaving the bad vibes behind as he and Francis had concocted the perfect road to victory once again. In a rough season for the friendly driver, it was notable each of his three Hendrick teammates went to Victory Lane, seemingly all at once to congratulate him. They knew how much pressure was lifted, in a matter of moments as Kahne went from a disappointment to a potential title contender under the right circumstances.

“There won’t be as much pressure on us for awhile now,” he said. “Just to make it, I feel like making The Chase, there’s a lot of pressure and you don’t really see that again until probably late.”

Kahne benefited greatly from the sport’s new format, where one win can erase six months of bad vibes. It’s rare you see a driver go from that far down in the dumps to back in the title mix in the matter of just one week. Now, guys like Bowyer and talented rookie Kyle Larson may have seen their opportunities die, with just two spots available and the points window squeezed that much tighter. Ryan Newman and Greg Biffle, two of just three Chasers currently in on points sit 23 and 42 points ahead of Bowyer, respectively with only one race remaining. Larson’s hill is even further to climb while Paul Menard, Jamie McMurray, and Austin Dillon are left with one choice only at Richmond: win.

“So happy for Kasey,” said Larson. “But that pretty much ends our Chase hopes.”

Unless they can pull off the miracle Kahne did in the matter of just one week.

So, Richmond is Kasey’s only short track win? This just confirms my suspicion that certain authors really have no idea what they are talking about and no desire to do actual research or analysis. Kahne won at Bristol last year.

This article is fluff. Writing substance is hard, I understand, but fluff is worthless and degrading.

Frontstretch used to be the place I turned to for analysis. What happened?

You beat me to it. I quit reading this article after the first paragraph. Should reporters at least know the facts?

A few here do seem to balance a lack of knowledge with a dull writing style. Amy Henderson seems to think out her columns and even occasionally deviates from the weekly NASCAR PR handout.