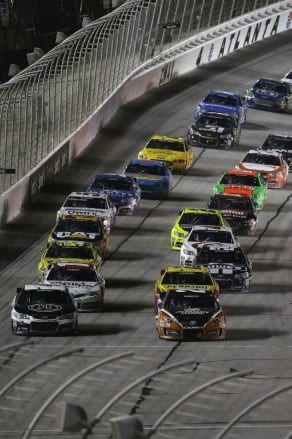 Last week, a running theme from Bristol revolved around teams missing their season-long opportunity to capitalize on a win. Several winless drivers, whose best shot might have been at Thunder Valley, instead looked like they were struck by lightning, thrown backwards while the sport’s best teams padded their playoff spots.

My, what a difference eight days makes following the running of Atlanta’s Oral-B USA 500. During the closing laps, it looked like a matter of same story, different week, when a caution for Martin Truex, Jr. and Kyle Busch’s cat and mouse games in the back bunched the field. The so-far-winless Kasey Kahne had the car to beat, inching ahead of Kevin Harvick during the race’s final segment but with an abrasive track, chewing up tires and speed it was up to the pit crews to perform with only two laps remaining. Staying out wasn’t an option; Kahne would have been eaten alive before the first turn. The mixed strategies shuffled the order like we have seen on quite a few occasions in the last fraction of a 500-mile race, leaving another winless driver, Matt Kenseth, in position to take control of his own destiny. But after another altercation switched things up again, the best car near the end, Kahne found its way to the front with a three-wide dash to take control.

What does it all mean? First, Kahne is now in the Chase along with his Hendrick Motorsports teammates. After being absent from the front of the field in several races this year, is he a contender? He has always thought so, but immediately following the race it was mainly reassuring to have that weight off their back.

“I feel like making The Chase, there’s a lot of pressure,” he said. “You don’t really see that again until probably late in The Chase.”

Season after season, we have seen the same story with different teams down the stretch when it comes to Kahne. Half the time, he qualifies for the Chase after suffering a panic attack to get there and the other half? Kahne’s one of the first on the outside looking in, qualifying only as the year’s main disappointment. There are always some fast cars and race wins involved, but Kahne has never been a name really mentioned going into Homestead as someone who can maintain consistency in the playoffs. Perhaps taking things one race at a time as they seemingly choose to could be the winning strategy this time as long as things go their way.  With the elimination format, combined with the strength of Hendrick Motorsports anything is now possible.

BOWLES: Kasey At The Bat

On the other hand, there is the continued story of Kenseth, whose consistency threatens to keep him a contender starting in mid-September. While second was, indeed the first loser at Atlanta the strong performance locked him into the Chase, the first winless driver to do so on points. It remains to be seen if these statistics can keep him near the top in the last ten races, but I think it can.

How does Kenseth prevail against the Hendrick and Penske juggernauts that have dominated the season? Think about it. At least one driver without a win inside the playoffs will advance to each of the next rounds in the Chase, including the finale at Homestead. We’ll see come Homestead if one of the contenders has the best car or if someone else with nothing to lose rolls the dice and pulls away from the competition. Well, near the top in consistency always seems to be Kenseth. While his Joe Gibbs Racing teammates seem to be either struggling or outright imploding during race weekends (see: the younger Busch) Kenseth has been able to steer the No. 20 into top-5 finishes despite a distinct horsepower and handling disadvantage. That veteran ability, combined with the confidence his team can get it together behind crew chief Jason Ratcliff gives Kenseth more of a leg up than people think going into the closing stages of the season.

“I feel like we have been steadily gaining on it,” he said Sunday night. “We wish we were a little bit faster, out there dominating races and winning more races, for sure, but I feel like my team’s really operating at a high level.”

Kenseth also went on to talk about short versus long runs. Teams like Hendrick and Penske that have shown the power have been very hard to beat during a green-white-checkered shootout and that proved to be the case again Sunday night, with Kahne taking control through the gears on that final restart. It appears that Gibbs, along with Richard Childress Racing, whose hopes died the second Paul Menard tried getting up to speed on the front row, need to find a way to keep up.

“Hopefully, we’ll keep gaining on that area a little bit,” said Kenseth, who now has two top 5s in a row heading to Richmond.  “Hopefully, some races will come down to longer runs and handling will come more into play and we can try to wear them out.”

He is not the only one that would like to see this shift. My dream situation to end the season would be a long green-flag run, one where tire and fuel strategy was thrown completely out the window. The four racers remaining in the championship hunt would then literally race their worn out equipment against one another, keeping nothing else in their mind except winning in the closing laps. That would be a show for the fans and without a doubt would prove who the best driver of 2014 is. These green-white-checkered restarts offered an opportunity for Kahne to slide his way into the postseason field Sunday night. But long-term? They don’t reward the best driver, over the course of a whole race who can see three hours of dominance ruined over the course of one shift through the gears.

But at least the shift on Sunday, for once went away from the championship favorites and to those on the bottom end of the Chase scale: Kenseth and Kahne. Time will tell if they can work their way up the ladder and stay there.

Said it before, will say it again. Any format that has the potential to produce a winless “Champion” is fundamentally and hopelessly flawed. Any intellectually honest person, even those that earn their living on the NASCAR tit should be able to admit that.

If wins is so important – then just crown the driver with the most wins at the end of the season with the championship – letting points break a tie – and be done with it.

Seriously, what is wrong with the champion is the one with the most wins? Simple and logical.

let them race till Homestead, most wins..wins! Tiebreaker at Homestead. Now that is a true Champ!

Whats wrong? Consistency should mean something too. Win 6 races, finish 42nd in the other 30 and your the champ? Thats worse than what they have now!

Name any other competitive endeavor where consistency means anything at all. From track and field to mating the object is to win.