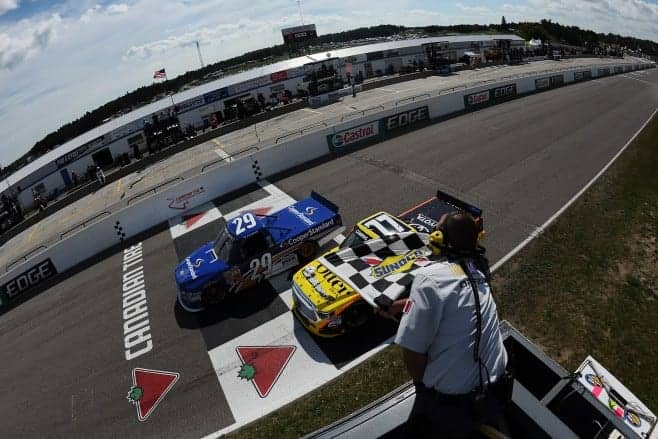 In a Nutshell: Ryan Blaney finished 0.049 seconds ahead of German Quiroga to win Sunday afternoon’s Chevrolet Silverado 250 at Canadian Tire Motorsport Park. The driver of the No. 29 Ford led twice for a race-high 34 laps en route to his first win of the season. Erik Jones, Gray Gaulding and Andrew Ranger rounded out the top 5.

Who Should Have Won: Ryan Blaney led 34 of 64 laps on Sunday afternoon and fought German Quiroga hard for the win. The pair battled for much of the final nine laps that were set up by a late caution for Alex Tagliani stalled on the track, but it was the white flag lap that really increased the excitement. After trailing Blaney, Quiroga pulled up alongside the No. 19 and took the top spot before a crossover move put him back into second. The pair crossed the start/finish line side-by-side and proved that the Truck Series should return to the Canadian track for many years to come.

Tagliani started on the pole and led the first seven laps before pulling off to pit road as part of the No. 19 team’s strategy. He struggled through most of the race with a stuck throttle, and it ended up coming back to bite Cole Custer in the late stages. Tagliani ran right into Custer’s No. 00, unable to slow his machine and spun him around. The debuting driver ended up spinning and stalling his truck, bringing out the second and final caution of the race. The No. 19 team got him back out on track, but Tagliani’s debut ended with a 16th-place result, one lap down.

Ranger, on the other hand, raced his way through the field after starting sixth, and that aggressiveness, combined with pit strategy for the frontrunners, put Ranger out front on lap 13. He led just four laps before pulling off to pit road for his own stop. He stayed out of trouble for much of the afternoon and managed to race his way to a solid fifth-place finish.

Meanwhile, Cameron Hayley and Ray Courtemanche, Jr. were much quieter in their debuts. Hayley qualified tenth and remained in that area for much of the race before finishing 11th. Courtemanche, Jr. qualified 21st and brought his No. 07 Chevrolet home 20th.

Hornaday’s Future Still Up in the Air

As we reported last Thursday, Ron Hornaday, Jr. sat on the sidelines Sunday afternoon while his teammates Cameron Hayley and Ben Kennedy raced at Canadian Tire Motorsport Park. According to a report from Fox Sports.com’s Jared Turner, Hornaday is still in the dark as to what even happened and whether he would race at all the rest of the season.

“I called Mr. Turner (TSM co-owner Steve Turner) and he said he couldn’t talk about it, and that’s all I got out of the whole situation other than what’s written and what’s said on the Internet,” Hornaday told FOXSports.com on Friday. “So I don’t know.”

Without having full knowledge of what was going on, Hornaday said he hadn’t really reached out to many teams trying to find a place to keep his championship hopes going.

“I called Mr. Newberry and spoke to him a little bit and that’s about all I’ve done,” Hornaday continued. “There’s not too many Chevrolet trucks out there, and my whole racing career I’ve been in Chevrolets, and with the support they give me and what they’ve done in my career, I’d be foolish to go to another manufacturer, but you never know. I’m optimistic but in all the years of me racing I’ve never had to chase money and never had to go through things like this. I’ve been fortunate enough to race for Dale Earnhardt, Kevin Harvick and everybody that gave me awesome trucks.

“I thought we were going down the same path [at Turner Scott], so I don’t know what to think about it other than I’ve got to go build some dirt cars for my grandson because that’s probably my next option is going dirt racing with my grandson and making his name.”

Though Hornaday remained optimistic that he could potentially find a ride before Sunday’s race, that didn’t happen. He dropped two spots in the standings to sixth and as of press time does not have any plans for the remainder of the year in the Truck Series.

* The Truck Series has struggled this season trying to fill their fields in the majority of the events, and Sunday afternoon was no exception. With only 28 trucks in the field, Caleb Roark, driving Jennifer Jo Cobb’s start-and-park truck, failed to even complete a lap, and B.J. McLeod only ran eight circuits before taking the No. 08 Chevrolet to the garage area, citing ignition problems. It wouldn’t be all that surprising to see NASCAR drop the maximum field size before next season so short fields can be more easily avoided.

* Did you know that only 13 drivers have run every single race this season? John Wes Townley missed two events while recovering from an ARCA Racing Series wreck at Pocono Raceway and didn’t travel to Canada; he has only run 11 races. Meanwhile, Ron Hornaday, Jr. was the latest to drop off of that list of drivers following the closure of his team at Turner Scott Motorsports earlier in the week.

* The Chevrolet Silverado 250 was slowed by just two cautions for six laps. The first flew on lap 48 for John Hunter Nemechek, who stalled in Turn 1, and the second was for Alex Tagliani, who stalled his No. 19 Ford in Turn 5 following a spin.

Championship Checkup:
Each week, we’ll take a look at the championship picture and find out which drivers were affected the most by the racing on track.

Biggest Winner: After a couple of tough races that dropped him from the point lead, Ryan Blaney’s victory helped him cut his deficit nearly in half. Heading into the Chevrolet 250, the driver of the No. 29 Ford sat 24 markers behind leader Johnny Sauter. He remains third in the standings but is now only 13 points out of the top spot.

Biggest Loser: Ron Hornaday, Jr. sat fourth in points before the series headed off to Canada without him on Sunday afternoon. Having gotten the short end of the stick with the Turner Scott Motorsports events from earlier in the week, the four-time champion sat on the sidelines and saw his title hopes sink. He dropped two spots and now sits sixth, 64 points behind Sauter. Even if Hornaday finds a ride for the remainder of the season, the missed race has likely ended any championship expectations, barring a major misstep by several of the leaders.

Points Update: Johnny Sauter remains atop the championship standings by seven points over teammate Matt Crafton. Ryan Blaney remains third, while Darrell Wallace, Jr. and German Quiroga each moved up a spot to round out the top 5. Ron Hornaday, Jr. dropped two positions to sixth while Joey Coulter remains seventh, followed by Timothy Peters, who has struggled mightily this season. Ben Kennedy and Jeb Burton round out the top 10.

Tweets From the Race:

Happy for all the fans and their support, it was a great road course race. I'll keep doing my best in the sport. Love @NASCAR_Trucks Thanks

Think we could of won today, even with some problems I think we had them beat, can't do anything when u get taken out, ended up P9

Up Next: The Camping World Truck Series takes next weekend off before heading to Chicagoland Speedway on Friday, September 12. Last season, Kyle Busch and Brad Keselowski battled up front, leading a combined 102 of 150 laps before Busch emerged victorious. Coverage for the Lucas Oil 225 begins at 8 p.m. ET on Fox Sports 1; the race can also be heard on your local MRN affiliate or SiriusXM NASCAR channel 90.

I wonder what Brad will do next year, since Ryan Blaney is moving up to the Xfinity Series. Still, it’s great to see a couple of competitive Fords in the Camping World Toyota Series. Too, wasn’t it a little ironic that a Ford truck won a race sponsored by their competition? Still, I have to also wonder if The Captain is giving Brad any help financially to operate his truck team. (Yes, I wonder if Gibbs is giving Cryle any money to operate KBM!) Saying that, given that this was the third race in 13-months won by a Ford F150, what is it going to take to get Ford the return and fully assist a couple of teams to take on and end the Toyota domination? I know the crowds are not all that great, as people get turned off by the Cup drivers dropping down and dominating the series, although there was a heck of a crowd Sunday. But, there were no Cup drivers to stink up the show. Still, I want to see a competitive Ford running, and Brad has provided that, for now.

Come on Ford! Come back and fund a couple of teams, and give this “Blue-Oval manufacturer-first” fan something to cheer about!

Man I hope Hornaday can stick around in good equipment, even part-time if at all possible. He’s Mr. Truck Series and wouldn’t be the same without him in it.