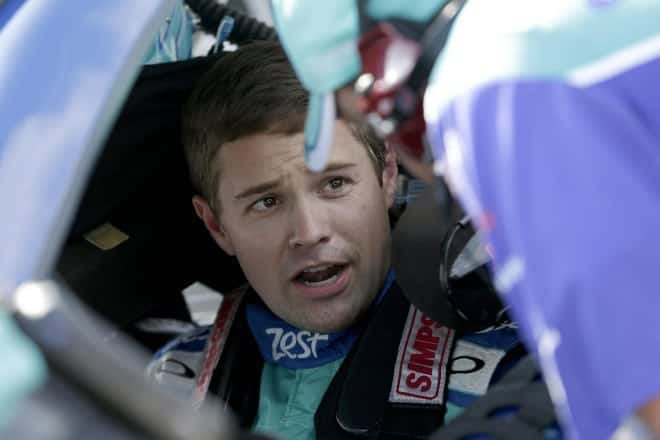 Did You Notice?… There’s a number of drivers where Saturday will be their last chance to make the Chase. However, with only two spots available, just four drivers (Ryan Newman, Greg Biffle, Clint Bowyer, and Kyle Larson) have a shot to make it into the playoff field through points. The rest must work their way into Victory Lane, a longshot for anyone who’s spent the season well outside the top 15 in points.

I figured I’d stop to take a look at some of these drivers, since by next week the overwhelming coverage of NASCAR’s new format will leave them swept under the rug in the midst of disappointing seasons. Here’s a few teams already figuring out what went wrong, in 2014 and looking ahead to 2015 to try and take the next step…

Austin Dillon. Dillon, 15th in the point standings has had a solid rookie year in terms of consistency. Without a single DNF, he leads the series in laps completed (6,936) and has a respectable 17.2 average finish. On the surface, it’s not exactly a bad year for the defending Nationwide Series champ, driving for grandfather Richard Childress.

The problem, though is threefold for the driver of the famous No. 3. First, it’s the expectations said number creates, the specter of Dale Earnhardt, Sr. hanging over every race. Dillon, since a pole for February’s Daytona 500 hasn’t made a dent to that resume by comparison. Second, rookie rival Larson has taken the series by storm, is on the edge of making the Chase and may very well win before the end of the season. Dillon? He’s led a grand total of four laps so far in 2014, with a best finish of tenth at Indianapolis at all tracks without restrictor plates.

Third and most important of all is a different type of number three: this team’s third-place finish in the 2013 Chase standings. Kevin Harvick was extremely competitive in this ride, winning four times and accumulating 14 top-5 finishes over 36 races. Right now, Dillon has just one. That’s a large gap in performance, one that can’t be blamed completely on 2014 chassis or RCR taking a full step back. Dillon, over the final ten races, needs to start stepping up if he wants to be considered a true contender come 2015.

Jamie McMurray. McMurray, the winner of this year’s All-Star Race hasn’t had that bad a season by his standards. But two top-5 finishes, along with seven top 10s, haven’t been enough to launch into Chase contention through points. The No. 1 team has had its chances, most recently at Bristol a few weeks ago before losing the handle in the final 100 laps. Close calls have also come at Charlotte, during the Coke 600 along with the July 4th race in Daytona.

Certainly, there’s no danger here of losing a ride, as McMurray is set with sponsorship and owner Chip Ganassi’s support through 2015. But a miss at Richmond makes McMurray an astounding 0-for-11 in Chase appearances throughout his career, a record no other driver shares on the circuit.

Marcos Ambrose. Had Marcos been able to wrestle by AJ Allmendinger, scoring himself a third career victory at Watkins Glen we might be having a different conversation. But at 20th in points, with just three top-5 finishes, it’s clear the man from Down Under will likely be headed there over the offseason. While his personality and unique racing style serves NASCAR well, it appears success at the Cup level has plateaued Juan Pablo Montoya-style in recent years. The average finish stats for Ambrose have stabilized, varying from a career best of 17.9 with Richard Petty Motorsports to 19.0 this season. More importantly, he hasn’t been a contender for an oval victory aside from a brief flirtation with the front of the field at Martinsville early in 2014.

Put yourself in Ambrose’s shoes for a minute. What road would you choose? Another year at RPM, scraping and clawing just to be a first-round postseason exit, with two races a year where you’re contending for victory or… become the star of the show in your home country, compete for a championship and have big money behind you in the form of perhaps motorsports mogul Roger Penske? No decision has been made official yet, but after this year, I think the choice is easy.

Martin Truex, Jr. Right now, he’s in the news for a scrap with Kyle Busch at Atlanta and honestly, with the way the Furniture Row Racing team has run, it’s the most Truex has been covered all season. Blowing his engine at Daytona, starting dead last the former Michael Waltrip Racing driver started on rock bottom and has yet to work his way up. Astounding stats through 25 races include zero top-5 finishes and zero laps led for a team that made the Chase last year with Kurt Busch. Truex is so far behind new RCR-affiliated programs manned by Casey Mears and Allmendinger have blown by him in the point standings, with Allmendinger making the Chase driving for JTG-Daugherty.

What’s remarkable for Truex is aside from a new head wrench, Todd Berrier his new digs weren’t dramatically different. The former No. 56 pit crew made the jump to the No. 78, and Truex has plenty of experience driving Chevrolets, running them for Dale Earnhardt, Inc., then Chip Ganassi Racing for nearly a decade. 25th in the point standings, where he’s currently stationed would be a career low on the Cup circuit and I think if both sides had better options, for 2015 we’d already see a change here. (Don’t forget, this partnership was a “shotgun marriage” for both sides). However, with no quality rides or free agents available… time to throw the book at it, these last 11 races and see if something sticks.

Ricky Stenhouse, Jr. You know how Tony Stewart missed three races? He still has more points than this fully-funded driver from Roush Fenway Racing. Only Danica Patrick is lower in the standings, among the A and B-level organizations on the Cup circuit as Stenhouse goes through an extensive sophomore slump. Also without a single lap led this season, he’s earned just a lone top-5 finish – second at Bristol in the Spring – and just five top-10 results. He also owns just two top-10 qualifying efforts this season and has a pathetic average start of 23.2.

Past performance has bought Stenhouse time, as RFR has been able to realign sponsors from the departing Carl Edwards, who was forbidden to bring certain companies with him, over to the No. 17 Ford. But with Chris Buescher on the rise, inside the Nationwide Series pressure is beginning to mount here. Remember, this team was a top-5 point contender with Matt Kenseth during a “lame duck” year, winning multiple times with limited sponsorship. Stenhouse, who has had multiple crew chiefs already during his first two seasons on the Cup circuit, is struggling to finish on the lead lap by comparison. Yes, RFR is going through a downturn but there is a bigger short circuit that needs to be discovered here.

Michael Waltrip Racing. No need to spend too much time here, as either Clint Bowyer or Brian Vickers could easily win at Richmond Saturday night. But the fact this team is on the bubble, perhaps getting zero drivers in the Chase two years after Bowyer ran second in Sprint Cup points is a major surprise. Yes, you can point to “Spingate” but other two-car programs (Penske Racing) are high-end contenders. MWR streamlined its operation, in the wake of losing sponsorship and top-tier crew support to maximize the output of both its cars. It’s not like the Bowyer-Pattie combination went through any type of major upheaval, as sponsor 5-Hour Energy signed a long-term deal to shore up financial support. Vickers can blame health problems, which kept him out of the car late in 2013, but he’s been inconsistent behind the wheel of the No. 55.

The Toyota Camry, which owns two wins in 25 races across the board this year has been a problem. Horsepower has been lacking here, too. Perhaps it’s merely a case of karma coming back around? Bowyer, while repaired on the public image front since Spingate, hasn’t been able to relay that into confident performances on the racetrack. He still looks invisible, to the point that moment continues to define his career instead of trips to the front or Victory Lane. Erasing that moment, which may not happen until an 0-for-2 trip to the Chase this season is still key to MWR moving forward and reestablishing itself among the Cup Series elite.

–       Good for NASCAR it’s got a Nationwide Series title sponsor, with XFINITY taking on the role beginning in 2015. However, just like with Camping World the money means nothing if the sport fails to address the health of the series. Being held up by a handful of Cup-supported teams, with half the 40-car field running jalopies every week isn’t going to get the Nielsen ratings ticking upward. Is XFINITY prepared to fund half the cars to go to the track every week? Right now, unless NASCAR can find a way to push new owners into the sport that’s the ugly direction it’s heading.

–       Kyle Larson. Pole winner at Richmond in the spring and with nothing to lose in a season where he’s already all but earned rookie of the year. Just an intriguing thought on a Saturday night that I know has lost its luster with Kasey Kahne’s Atlanta upset.

–       Speaking of Hendrick Motorsports, Jimmie Johnson quietly has back-to-back top-5 finishes for the first time since June. How did they lose their spot as title favorite once again? Don’t we see this type of thing every year? I’d trust past performance over the last ten races more than ever, especially in NASCAR’s new format where a win guarantees an advance to the next round. Johnson, in the Chase era has won light years more than anyone else on the circuit during that stretch.

Nothing would please me more than to see Clint Bowyer win at Richmond. And when he does his victory burnout, he needs to yell “I’m spinning on purpose!”

Nothing would please me more than to see Clint Bowyer leading the race with 10 to go and have Martin Truex spin out. That would be true poetic justice.

What really bothers me though is the fact that so many guys with mediocre seasons have a shot at the title in the 10 race crapshoot.

40 competitive jalopies would be a vast improvement over the 6 car Vanity Extended Cup Practice mess that the soon to be Xfinity series has become. And the press just keeps on sniffing the NASCAR “Cup drivers are propping the series up” glue. Hello, it isn’t even racing anymore. The Cup drivers are killing the series if they haven’t killed it dead already. The Xfinity executives have to be idiots to toss money down that black hole.