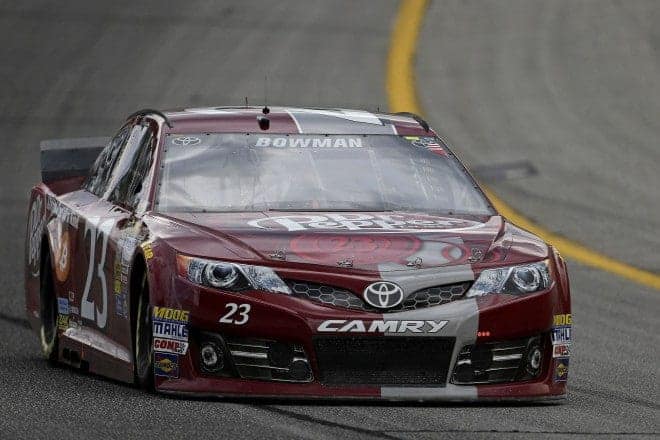 Welcome to the Frontstretch Five, a brand-new column for 2014! Each week, Amy Henderson takes a look at the racing, the drivers, and the storylines that drive NASCAR and produces a list of five people, places, things, and ideas that define the current state of our sport. This week, Amy has five reasons to pay more attention to NASCAR’s small teams.

You have to look hard to find them on the weekly television broadcast. Rarely making a blip on the network radar, several teams take to the track every week, knowing they don’t have enough to compete: not enough money, not enough equipment, not enough people, not enough speed. Yet they go out there anyway and fight for the best position they can. A top 20 is a small triumph; a top 15 is a big one. It’s reality for NASCAR’s smaller teams, the underfunded and undermanned. Why should fans and, more vitally, sponsors, pay attention to these teams the media often ignores? Turns out, there are a lot of reasons.

Among these mostly one- or two-car operations are some drivers and crew members with more to offer than those who would overlook them might realize. There are drivers and crewmen with wins and championships, some in NASCAR‘s upper levels and others on tough but lesser-known circuits. Martin Truex, Jr. is a Sprint Cup Series winner and two-time Nationwide Series champion. Travis Kvapil is a Camping World Truck Series champ. AJ Allmendinger has multiple open-wheel wins as well as victories in Nationwide and Sprint Cup. David Ragan, Casey Mears, and Joe Nemechek are all Sprint Cup winners. David Gililand and Justin Allgaier have NNS wins; Landon Cassill is a Rookie of the Year winner in that series. JJ Yeley is a USAC Triple Crown winner.

And that’s just the drivers. There are also crew chiefs and team members who have visited Victory Lane on many occasions. Don’t confuse these teams’ lack of resources with a lack of talent in the seat or behind the scenes. These are proven winners and champions, not wannabes and never-has-beens.

It takes the same amount of preparation to roll every Sprint Cup car to the starting grid each week. Every part and piece has to be checked multiple times. Adjustments are carefully conceived and made, setups considered and reconsidered. It’s no different from the wealthiest team to the most impoverished. The difference comes in the number of people doing it. While the elite teams have a hundred people or more working on racecars, the small teams could have 20, or even half a dozen doing the same work.

In addition, there are fewer parts and pieces to choose from at the shop and at the track. There’s no fleet of cars to pick from, either. They go to the track each week anyway, and sometimes run competitively with the top teams. What’s not to like about that?

Amid complaints of drivers toeing the company line, the back side of the garage has a group of people from team owners to drivers and just about everyone in between who are willing to speak candidly and honestly to fans and media. There’s no pretense, no reason to hide anything. Even those with sponsors aren’t, for the most part, as worried about saying or doing something that’s a millimeter out of line. It’s a refreshing change from people who are, often falsely, labeled as “vanilla” or “robotic” because they’re afraid of offending someone with money. The smaller teams have compelling, outgoing, genuine personalities who are more than willing to speak to fans and media, if only someone sought them out. It’s too bad that doesn’t happen more often.

Part of that PC mentality for the elite teams comes from the corporate sponsors paying the bills. When they’re throwing tens of millions of dollars at a race team, it comes with certain restrictions. The teams and drivers take on a corporate mentality that’s often a step removed from the sport’s many blue-collar fans. The small teams, meanwhile, aren’t in it to make someone rich (or richer). They’re in it to survive, and to race.

Tommy Baldwin and Frank Stoddard didn’t start race teams to make a fortune. They were both in the position to buy their teams when their existence was in jeopardy, and they did so more to ensure that those team members would still have jobs than to fulfill any misguided illusions of being the next Hendrick Motorsports, though that team was once an underfunded upstart, too. With many fans tiring of the corporate mentality that has pervaded the sport in recent years, the smaller teams provide a refreshing change from their big-money counterparts.

5. Racing is about people.

In the end, though, NASCAR is a sport of people. The stories of the people on the backside of the garage are not less compelling, just less-often told. Fans choose a driver or team to support for a variety of reasons, and so do sponsors. Both sets are doing themselves a disservice if they don’t consider everyone in the garage. The youngsters and veterans on the backside are usually happy to spend a few minutes with fans. Some, if they can, will spend a considerable amount of time talking racing with anyone who cares to ask. That is the kind of people who made NASCAR the sport it is, and it’s refreshing to see that some, their heads unclouded by fame and money, still understand that. These teams come to race, and they race hard for every position, every week. They’re accessible to fans and media and most are outgoing and friendly to boot. They are NASCAR … most people just seem to have forgotten that.

Now I don’t feel so silly for watching qualifying. While you rarely see any but the top dozen on race day qualifying gives you the opportunity to at least see what the little guys look like now and again.

maybe we should get up a lottery, for entertainment purposes only, for which little team will go away because Gibbs is adding another team.