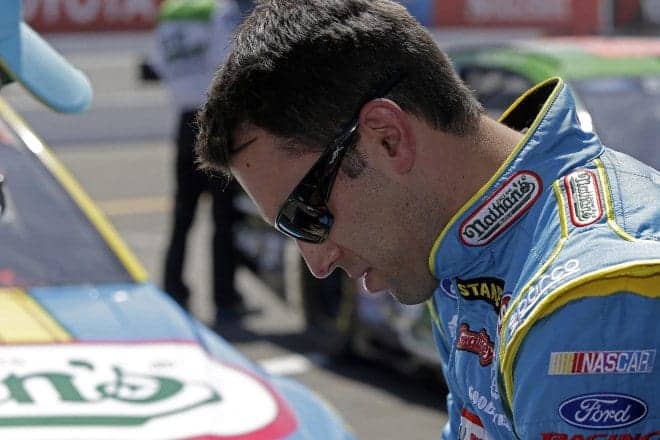 On the heels of clinching his first Chase berth and first career Sprint Cup Series win at Daytona in July, Aric Almirola hopes some double duty when the Chase for the Sprint Cup begins at Chicagoland Speedway next weekend is the edge needed to propel his No. 43 car to the second round of the chase.

Biagi-DenBeste Racing announced on Thursday that Almirola would drive the No.98 Smithfield Foods Ford for the organization in two Nationwide Series races starting next weekend in the Jimmy John’s Freaky Fast 300 at Chicagoland Speedway and also at Dover International Speedway on Sept. 27.

“I’m excited to return to the Nationwide Series at Chicago and Dover,” said Almirola. “Our team is really focused on getting to the Contender round in The Chase, and I think running the Nationwide races for two of the three race in the first round will really help us. To have Smithfield, Medallion Financial, Opus Global and Petty’s Garage step up and let us race those weekends is really special. We’ll be there to learn as much as we can for the Cup races, but I also want to win. Win for the Biagi-DenBeste team and for myself. I’m just grateful for the opportunity and can’t wait to compete at Chicago and Dover.”

Almirola is no stranger to Nationwide Series competition, making 74 career starts in NASCAR’s second level series with one win coming in controversial fashion at Milwaukee in 2007. He started the race in Joe Gibbs Racing’s No.20 Rockwell Automation Chevrolet before being replaced by Denny Hamlin, who flew in from Sonoma Raceway to finish the race. Almirola also has 10 top-5 finishes and 29 top-10 finishes in those starts.

“We’re happy to have Aric come on board for two races this year,” said Fred Biagi, co-owner of Biagi-DenBeste Racing. “We’ve run nine races so far this year with various drivers and scored a season-best finish of fourth. We are pleased to add Aric to the list of drivers of the No. 98 this year and hope that with his experience in both the Sprint Cup and Nationwide series we continue the trend of top-5 finishes.”