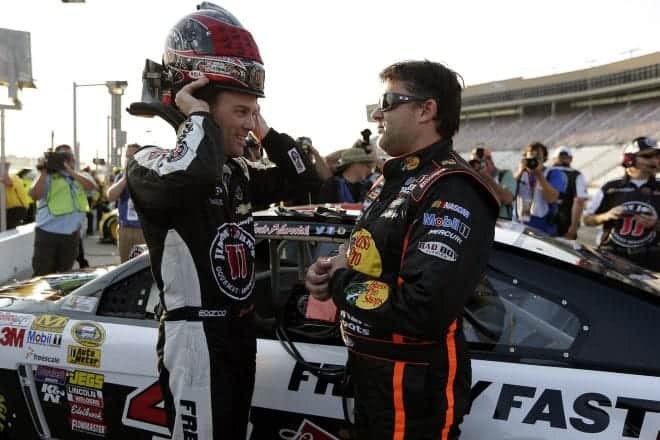 NASCAR introduced its new fantasy game that will begin next week called the Perfect Chase Grid Challenge. It will give fans a chance to predict which drivers will make it through each round of the Chase, with four being eliminated after the Dover race, four more being finished after Talladega and then four more after Phoenix, leaving NASCAR with its version of the Final Four in the final race at Homestead.

It sounds interesting and all, and I’ll probably give it a shot, considering there is that one in a million chance to win $100,000. But what we all want to know this week, is with two Chase spots remaining to be clinched in Saturday night’s race at Richmond, is just who will make it through.

I’ve been thinking a lot this week about a rookie who won his first Sprint Cup race in the fall at Richmond race 15 years ago. His name was Tony Stewart. So, maybe he can recapture the magic for at least one night and race his way into the Chase.
Then in the same manner, this year’s top rookie so far has been Kyle Larson, and I’ve said he would win a race this season. And given that Stewart passed out a rare compliment about Larson’s talent last year, maybe it would be a bit special if Larson won his first Sprint Cup race at Richmond as well.

While there’s an outside chance that Larson could make it on points as well, he, Stewart and a host of others are in the win or miss the Chase situation. That would include Clint Bowyer, Paul Menard, Austin Dillon, Jamie McMurray, Brian Vickers and Marcos Ambrose. I mention these guys mainly because they are on teams that can win races and are not extreme long shots to do so.
Then, too, you will also have Ryan Newman and Greg Biffle playing the points game a bit too Saturday. If there’s a new 2014 winner (with the exception of Matt Kenseth) Saturday, and it’s not Biffle or Newman, Biffle will be looking to get ahead of Newman in the points. Newman will just be looking to avoid disaster, given he has a 19-point lead over Biffle. So, a lot to keep track of for those guys.

Those are just some of the things to keep in mind for this week’s picks.

A former and future, but not current, teammate of Kenseth’s who has been good at Richmond is Carl Edwards. He is second behind Kenseth among active drivers with an average finish of 8.60 in the last five races at Richmond. Edwards was ninth in the spring Richmond race and does have one win in the last five races there. He also has also led 252 laps in those races, so he can get to the front.

It sure looked like Kevin Harvick was on his way to a win late in last Sunday night’s race, until Kasey Kahne showed up and then Paul Menard couldn’t get going on a restart. The point is, Harvick, who does have two wins this year, could have won at least two or three more races if some things had not gone wrong for him in the late stages. At Richmond, Harvick has a win in the last five races, and he was 11th in the first Richmond race this year. It’s more of a surprise when he doesn’t contend to win these days.

A driver who is desperate for something good to happen going into the Chase is Kyle Busch. His latest flap involved running into the back of Martin Truex Jr. late in Sunday’s race. But Richmond has been good to Busch as he does have a win in the last five races there and he finished third in the spring race this year. For his career, Busch has four wins in 19 career races and has finished in the top five on nine other occasions. If Busch and his team can’t get well Saturday night, it may well be another long and frustrating Chase for him.

Maybe Joey Logano’s teammate, Brad Keselowski, had it right last year when Logano kept getting roughed up on a consistent basis. Keselowski said the main reason it was happening was because the other competitors knew Logano was going to be a threat to win a lot of races. Logano is not just a threat to win any more, he’s one of the favorites. And that’s the case again Saturday night as one of his three wins this year came at Richmond. Logano has just one other top 10 finish in his last five races there, but it’s not unusual to see drivers win twice at the same track in a season because they sometimes figure out just how a particular car works on a track.
One of the drivers who pretty much has to win to make the Chase is Clint Bowyer and he is at the right track to do that. Bowyer does have one win in the last five races at Richmond and has three top 10 finishes in those races. But Bowyer also has led 273 laps in those races, the most among active drivers.

A driver who probably won’t have to win to make the Chase, but could erase any doubt by doing so is Ryan Newman. He has three top 10s in his last five races at Richmond, with a top finish of third. He was eighth in the spring Richmond race.
And if you are wondering if Greg Biffle should be a bit nervous about holding onto his place in the standings Saturday night, the answers is a resounding yes. Biffle has just one top 10 finish in his last 15 races there. That happens to coincide with when Roush Racing became officially known as Roush Fenway Racing. Read into that what you will, but it hasn’t been a good year for the Red Sox.

Finally, yes, Stewart does have a chance to win Saturday night. He has three career wins among his 11 career top five finishes in his 30 races there. But he knows a top five won’t do him any good Saturday night.

Earlier I mentioned that Larson may well be a contender Saturday night. He wasn’t overwhelmingly good in the spring race with a 16th place finish. But like Stewart, he earned his way to NASCAR with his ability to race well on the short dirt tracks, so if there is a lot of rubber on the track to make it slick, that will certainly play to his advantage.
The other usual pick in this category is Austin Dillon. He was 27th in the spring Richmond race, so it will be interesting to see if he and his team can make some progress.
Now, with Danica Patrick finishing sixth at Atlanta, that was certainly an eye-opener to many. And it was a good sixth-place finish, not one she lucked into by using a different strategy, or just happening to be there, like if the race had been called due to rain. Then after the race, Patrick admitted Richmond is a tough place for her. And she would be right as she has finished between 29th and 33rd in her three races there. So, it might be right to listen to her advice this week.

The overall leader in the Frontstretch League on Yahoo! Remains NoBarNASCAR with 6,880 points, followed by LeftTurnOnly at 6,839 and Mojothemonkey at 6,809. The biggest mover of the week was the C.Elliott 2014 Champ!!!! team, moving up 10 spots into 21st overall.

The top score of the week was 338 points by the L&M team with Matt Kenseth in second, Denny Hamlin in third, Kyle Larson in eighth and Joey Logano in 14th.