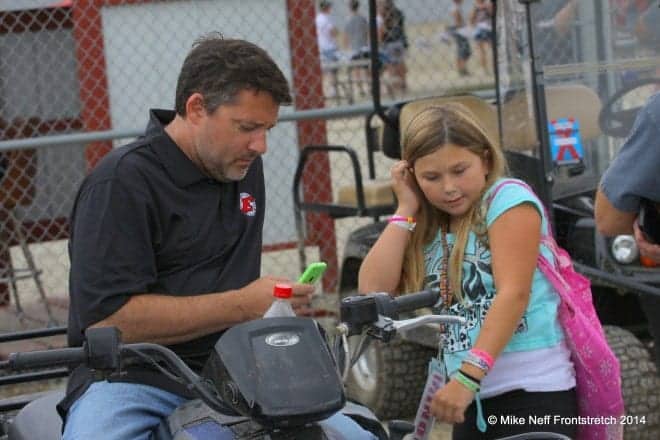 When it’s all said and done, Ryan Newman will be part of the 2014 Chase for the Sprint Cup.

But you already figured – perhaps knew – that, didn’t you? After all, all Newman has a 19-point lead on Greg Biffle entering Richmond, the final race before the Chase begins. Even if, Biffle made up those points, the Richard Childress Racing driver would still have a cushion on Clint Bowyer, who is currently 42 points behind. His only troubling scenario is if he runs an awful race and another winless driver that isn’t Biffle makes his or her way into Victory Lane on Saturday night.

Yeah, he’s good — though part of me wants to see what will happen if he doesn’t make it in. The comments here and my Twitter mentions should be fairly amusing. Make predictions — bold or otherwise — and all eyes are on you once an omen goes awry. Social media’s only made that international pastime all the more entertaining.

But hey, go hard or go home, right? Newman making the Chase seems fairly likely, but what about the 16th Chase competitor? Will it be Biffle? Bowyer? Kyle Larson? Or what other winless driver in 2014?

To show why, let’s play a game of process of elimination.

The players, again not counting Newman, are every driver within or near the top 30 in points (David Ragan, Cole Whitt and David Gilliland included) without wins that aren’t locked in (hey there, Matt Kenseth). That’s 18 in all, giving each driver a one-in-18 shot to enter the Chase if all were equal.

The nice thing here is that since there’s only one race left before the Chase, there’s really only one track that needs to be discussed: Richmond. And really, because it’s Richmond, a few drivers can already be eliminated by that regard alone.

Entering Saturday, Whitt, Danica Patrick, Michael Annett and Austin Dillon have had minimal success at the track in anywhere between one and three starts. Let’s not kid ourselves with anything triumphant – save for maybe Dillon, but given his lack of contending for many top 10s in 2014, let alone victories, his equipment alone doesn’t get him past this round. Justin Allgaier had a respectable 21st-place finish there earlier this year, but coupled with his low position in the points, we probably shouldn’t bother. Then there’s Ragan and Gilliland, whose careers at the track range from OK (Ragan) to dismal (Gilliland). Pass.

Now that they’re out of the way, let’s zero in a little further on the drivers who have more of a shot.

Of the winless drivers entering the Chase, Bowyer has had the best recent streak, winning once in the last five races there and scoring three top 10s. Overall, he has two wins and an average finish of 12th in his career. Additional special mention to Stewart, who’s scored two top 5s in the last five Richmond races and has easily the most impressive career 0f the drivers considered, with three wins and an average finish of 11.1 over 30 races.

On the other side of the spectrum, Ricky Stenhouse, Jr. has a mere 21.3 average finish in his three races there and has had a solid last five races in 2014 (average finish 15.8), but it’s just not popping out like, say, Bowyer. Pass. Same for Casey Mears, who’s only scored one top 10 there in his career and has been equally unimpressive as a whole – though solid for a smaller team – over the last few weeks. Nah.

I’ve kept Larson in here so far despite just one start at Richmond because it’s hard to argue with one of the other variables, his performance the last few weeks. He’s scored a top 5 and two top 10s over the last five races and sits just a little outside the Chase, but unfortunately far enough behind that his only shot is a win. That’s why he has to exit here; Larson hasn’t shown a real winning streak in him yet, and it’s probably not going to surface in 2014 at all in the Cup Series. Wait until next year.

Might as well kick Brian Vickers to the curb, too. Along with some tepid results at Richmond over his career – just three top 10s in 17 races – he’s got a 20.4 average finish over the last five races of 2014. Time to bank on Bowyer, Michael Waltrip Racing employees – not that they weren’t already.

Finally, Marcos Ambrose has shown a lick of promise on short tracks, but that generally only extends to Bristol and Martinsville – and he couldn’t cash in. He does have a top 5 and a pair of top 10s at Richmond in 11 starts but just hasn’t shown the muscle some of his contemporaries will this weekend.

Here’s where it gets tough.

Truex is probably the least likely of the bunch to break through. His Richmond career has been slightly better than McMurray and Menard, but there’s just no getting over that sort of thing when your team is as bad as it is, and Truex and his Furniture Row Racing No. 78 has averaged a 24.8 finish over the past five races. That’s worse than every driver considered except for Stewart, Whitt and Annett. Don’t expect a repeat of last year that saw him make the Chase – not that he’d necessarily want the exact same to happen, given Spingate.

Menard’s a tough one, as is McMurray. Both have OK careers at Richmond and have had much better recent results leading up to the Chase. Call them the dark horses, as long as Menard doesn’t screw up another restart like last week. With drivers like Aric Almirola and AJ Allmendinger already in the Chase, Menard and McMurray both seem totally feasible.

In the end, it comes down to Biffle, Bowyer and Stewart. The first two have the results, whether it’s Bowyer’s stellar Richmond career or Biffle’s iffy Richmond run but superb recent history – top 5s in each of the last five races.

But how to count out Stewart? Bowyer’s career stats at the track are strong but it’s tough to argue against Stewart’s 11.1 average finish over 30 starts, not to mention his three wins.

There’s just, of course, the problem of Canandaigua.

Stewart will mark only his second race back on Saturday since the incident at the upstate New York race track that killed Kevin Ward, Jr. Emotionally, he’s likely not 100 percent, and a rough showing at Atlanta doesn’t help matters.

But if Stewart has shown anything over his career, it’s his tenacity and drive in the face of adversity – his 2011 champion is more than enough proof. Given that, plus a strong showing there in the past and a 12.5 average finish over the last five races at Richmond (four starts; he missed last year’s fall event), the stars seem to have aligned for what would undoubtedly be a huge story.

In the end? Yeah, sure, probably Biffle or Bowyer for the 16th spot. But don’t, under any circumstances, count out Smoke.

Well if there is any sanity or logic in the world of Nascar..we should and could expect Tony Stewart to be out, but then again I hold my breath. But on the flip side, what Nascar powers want…

Stewart sits in perfect position? What a stupid title. I’d bet Tony doesn’t feel that way. Perfect position is being in the chase with one race to go.

Of course, Stewart is in perfect position, because he just so happened to recover from his “grief” in time to get into the Chase. Plus, he has the support of NASCAR brass who will do everything in their power to give him the breaks he needs Saturday night. It’s all about sponsorship money and TV ratings, so Tony is almost a lock. I say “almost,” because Kyle Busch was the only driver who had the balls to put Tony into the wall last weekend, and hopefully he will do the same this week. Who knew that Kyle would turn out to be the only member of the “NASCAR family” to have any integrity? Tony should still be sitting out and I hope the Ward family is keeping close tabs on his earnings as they get ready to file their wrongful death civil lawsuit.

You’re kidding right? The same Kryle that didn’t have the balls to take off his helmet and get out of the car when Truex called him out. He is a bigger pussy than King Kong’s cat. To jump subjects, how would being indicted effect Tony’s Chase chances?

I was being sarcastic – to a degree. Kyle has been so pissy lately that I doubt he cared whom he was taking out; it was just Karma that Tony was Victim #1. And I hope Tony gets more of the same, regardless of who punts him this weekend. I will applaud any driver who wrecks him, intentionally or not.

And when did I say anything about Tony being indicted? Apparently you are one of those “legal experts” that have suddenly appeared on NASCAR sites, who don’t know the difference between the criminal court system and the civil court system. I assume Tony will NOT be charged or indicted for a crime. That in NO WAY prevents the Ward family from filing a civil suit for wrongful death. And they will. And Tony will pay big time.

As for Truex, he is a fly on the wall. Ignore him or swat him, it doesn’t matter to me.

Looks like we were both being too serious! I was kidding too. I am content to withhold judgement until the investigation is completed. I was just wondering, now that the NASCAR press has declared Tony not guilty, and a living Saint, how will they react IF the Criminal Justice system decides to rely on an actual impartial inquiry instead of the opinion of the racing fraternity? As an aside, I worked in the criminal justice system for about 35 years. I know how it works or more usually, doesn’t work.

Almost forgot, I love to mess with other posters but never to offend (well the writers maybe). Anyway, apologies, hope we’re okay.

JohnQ, we are fine. I just misunderstood your comment about a possible indictment.

Oh wow, a literate troll. We get so few of those.

It would not surprise, if Tony pulls off a ‘win” to help with his “grief”, despite the fact he has underperformed this year before his personal drama took over the Nascar world. Kyle did seem to mess with the script last week..lol. Tony qualifying well…check! Tony running running top 10..check! Not the norm for this year..Nothing suprises in the mind of the Nascar “leaders”. Lol.. but it Tony did get a win, can you imagine the mileage Nascar would have with this????? I get sick thinking about it.