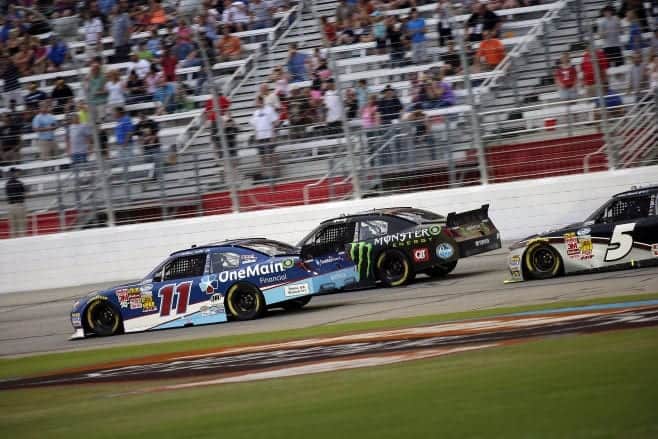 The bottom groove proved to be crucial in Saturday night's race. (Credit: CIA)

Say goodbye to the Nationwide Series. Sort of.

Nationwide Insurance is departing from its role as the title sponsor of NASCAR’s second-tier division as of Jan. 1, instead shifting funding over to Hendrick Motorsports as a primary sponsor for Dale Earnhardt, Jr. in 12 events.

But Nationwide’s replacement won’t have funny commercials using Earnhardt and Danica Patrick in the same way. With the arrival of NBC Sports in 2015 in one of the largest television agreement deals in the history of all sports, Comcast, which owns NBC, has made another giant investment in the sport. Starting next year, the highest developmental division in stock car racing is going to be known as the NASCAR XFINITY Series.

Sounds odd, doesn’t it? Well, the NASCAR Nationwide Series certainly sounded that way after it was known as the NASCAR Busch Series, and the NASCAR Sportsman division prior to 1982.

The move is an immense one for not just the sanctioning body, but also for fans. The partnership will last at least 10 years if the deal runs its course, several years longer than Nationwide.

With Comcast’s long-term investment in NASCAR, there might be several innovations taking place.

“The fact that they’re an innovative company in this space, XFINITY, and they’re leading their industry with both distribution and technology, video, being the lead internet provider,” said Brian France, chairman and CEO of NASCAR, in a statement surrounding the news. “That’s exactly what we’re trying to do at NASCAR in a different way. We’re trying to embrace technology and innovation wherever we can to either lower costs or make the experience for our fans a better one. So the idea that this relationship met that criteria is a pretty easy decision at the end of the day, and we’re thrilled to be partners with XFINITY.”

Over the years, the Nationwide Series has received criticism for its on-track product. Although the reaction to Sprint Cup Series drivers racing in the division won’t end anytime soon, NASCAR reassured that it wants to continue developing young racers against top competition. And if NASCAR and XFINITY continue to use that as a key marketing solution, the sport’s ratings could very well skyrocket over the next few years.

Reactions when Kyle Busch wins a Nationwide Series event can be described in one word: abysmal. However, when certain other Sprint Cup Series stars go to Victory Lane in the division, especially after a winless streak with their Cup Series team – see: Paul Menard, for instance – fans get extremely excited and rally around a driver. That is something XFINITY can bank on over the course of its 10-year agreement with NASCAR.

But the move for Comcast is probably bigger for the media company than it is for NASCAR.

“One of the things that is especially important to us is live sports,” Peter Intermaggio, senior vice president of Comcast marketing communications, said. “We know that live sports is important to television viewers everywhere.  It’s the most important content they can have access to.  So we’re really excited about participating in sponsoring this incredibly exciting sport that people follow with tremendous passion and intensity, so that’s why we’re here.

“Second, technology.  What you’re doing with technology across all of NASCAR is really exciting.  Technology is everywhere from the track, to the garage, to the car, to the stats, to the viewing experience.  That’s where we see tremendous alignment with our brand, what our strategy is about, what we’re trying to bring to the viewing experience, really using technology to improve the viewing experience across the board. We’re excited by the drivers.  We think this set of drivers represents exciting energy and ambition and gutsiness and drive.  Those are all qualities we admire and aspire to be like at Comcast.  We see a lot of affinity there as well.”

The branding has the potential to expand Comcast to levels it has never seen before – taking an old school racing series and making it as modern as can be. With a high ceiling of potential, the XFINITY Series could very well become more modern than the Sprint Cup Series. For instance, a livestream could become available over the next few years, giving a test to see how fans would react to it if the sport were to have one with the Cup Series. It would be on a larger scale than the Camping World Truck Series and it would showcase technology used by NASCAR and Comcast. Add that with Sprint in the Cup Series and you have three giant organizations working to create a product that no other sport has.

As a new breed of drivers work their way up through the ranks, all eyes are going to be on them making a name for themselves in the XFINITY Series. Fans spend an average of four-and-a-half hours per week watching NASCAR competition, along with more than two hours of looking up NASCAR information on the Internet.

It is expected that Comcast’s involvement in NASCAR is going to help further the sport’s digital presence, and if that is the case, there is a bright future – or at least perhaps a light at the end of the tunnel – for a sport that has seen a decline in ratings over the past few years.

Sometimes I actually wonder if the writers here believe what they write. Learning how to lose by being battered week after week by those much more advanced does not develope talent. That is why every other competitive endeavor has classes. Kyle Busch is perhaps racing’s least favorite driver but he is only one of a half dozen drivers assuring us of a boring weekly event. Blaming him is an excuse not an explanation. Claiming the Paul (who?) Renard victory was a huge fan favorite is either a delusion or a cynical lie. NW, Xfinity, call this mess whatever you want but it has no identity beyond Cup Vanity. The NASCAR brain trust, and the geniuses at Comcast can throw all the words out they please but the freefall ratings will continue to reflect the actual situation. Cup drivers mean no competition. No competition means no fans. I have Comcast cable. Comcast is as customer deaf as NASCAR is fan deaf. Want an honest prediction? Fans can expect ten more years of being treated like fools that will believe what they are told to believe. Like watching a race without a racing is exciting.

So basically what you’re saying is that Comcast has innovative technology, provides a lot folks with internet service, and really, really likes live sports. Let me add that “Xfinity” starts with X, probably the coolest letter in the alphabet. And you think any of this is going to save the series?

The most important words in this whole article are “if the deal runs its course”.

Nationwide dropped a whole series to do what? ….. sponsor a Hendrick team. Dale jr. That says a lot.

So comcast comes along and with a wave of the magic wand will save the day. Yeah….call me when that happens. Lipstick on a pig?

And I’ll say it again, if Dale Jr. was doing everything that Kyle is doing, he’d be even more of a “hero” than he is now. Go ahead and kick Kyle out, I don’t care, but it’s not the answer.

Three years later, I don’t think I’ve seen even one person strutting around in Paul Menard gear in the wake of him winning at Indy.
If Xfinity, Infiniti, or whatever it is wants to make a meaningful difference, return the series to some of the tracks abandoned years ago (Hickory, South Boston, Myrtle Beach), places where there’s a chance it would be a big deal. Is a race at Chicago in July during the Cup off weekend a big deal there? Maybe to the 250 people that were in the crowd. Put the Indy race back at IRP.
And I’ve never understood why the in-race reporter couldn’t be a Ryan Sieg or a Jeremy Clements. What insight is possibly gained from having Joey Logano or Kevin Harvick miked during a JV game?

“One of the things that is especially important to us is live sports,” Peter Intermaggio, senior vice president of Comcast marketing communications, said. “We know that live sports is important to television viewers everywhere. It’s the most important content they can have access to. So we’re really excited about participating in sponsoring this incredibly exciting sport that people follow with tremendous passion and intensity, so that’s why we’re here.”

“The most important task for us is promoting our product. We also know that in the DVR era, live programming is especially important to advertisers. It’s the most effective promotional vehicle they have access to. Through this arrangement of sponsoring a sport with a passionate (albeit dwindling) fan base, we can push our products and services AND have leverage against advertisers who want to air commercials during our races. It’s a no-brainer.”

Read the Mentally ill for Nationwide column. It is another hilarious attempt to convince us that watching a Cup driver lead every lap of a NW race is exciting. It is an insult to the intelligence of every reader. I swear there were no more than 3500 fans there so I guess we are not as stupid as the NASCAR sock puppet press believes we are. They couldn’t do more to kill off this series if they tried to.