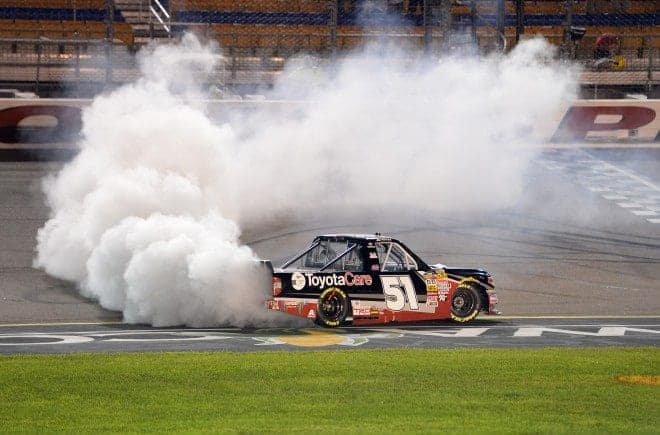 Following last week’s Turner Scott Motorsports reports, news in the Truck Series has been relatively quiet, with the exception of TSM officially shuttering the No. 30 team, leaving Ron Hornaday, Jr. and 18 members of the team unemployed. With both owners apparently embroiled in lawsuits against each other, there’s not a whole lot more that I expect to come out of the story until some kind of decision is made by a judge. In the meantime, it’s a great chance to look at another group of some of the Truck Series’ most memorable moments.

In its inaugural year, the Truck Series lived up to the current day expectations of tight racing and close finishes. The 1995 Total Petroleum 200 saw Butch Miller, driving the No. 98 Raybestos Ford edged Mike Skinner by a slim 0.0001 seconds in what can only be called a photo finish. As it turned out the victory was the only one for Miller in 145 series starts.

I may be in the minority here, but I really enjoy restrictor plate races … except when it comes to the big crashes like this one. I remember when this wreck happened sitting here in front of my television at home, praying that Paludo was alright. Lifting all four wheels off the ground and tearing apart the front end of the truck, I was sure that he was injured at the very least, but instead Paludo walked away to race another day. It’s a testament to just how far the safety innovations have come in the NASCAR world.

First Rookie to Win a Race

On March 16, 1997, the late Kenny Irwin, Jr. became the first Rookie of the Year contender to win in the Truck Series. Irwin scored the victory in the Florida Dodge Dealers 400K in only his eighth career start. Sadly the young driver’s life was cut short when he was the victim of a stuck throttle during a practice session at New Hampshire Motor Speedway in 2000, just two months after Adam Petty was killed in nearly the exact same spot on the track.

During the May, 2010 running of the North Carolina Education Lottery 200, Brent Raymer’s truck burst into flames for no apparent reason, leaving the young driver to scramble out of his truck in a big hurry. With not visible reason why the fire even started, the SPEED broadcast crew speculated a broken fuel line. Though the flames engulfed the entire engine compartment along with the cockpit, Raymer was alright though visibly shaken. But financially, Raymer took a huge hit in his attempt to string together a series of good finishes on limited funding. He lost two trucks and a motor – the majority of his available equipment – in a single day, already running on a shoestring budget with his self-owned team. Though he finished out the season, Raymer was forced to start-and-park through many of the remaining races and was unable to make a single start in his own equipment following the 2012 season. He hasn’t raced in the Truck Series since a lone event in 2012 at Texas Motor Speedway.

Ahem, Dear Frontstretch, Miss Lunkenheimer is a really good writer. Please take her out of the Obituaries section (the truck series is dead, we all know that). Let her write about something people are actually still watching. At present her talents are being wasted. Sincerely, JohnQ