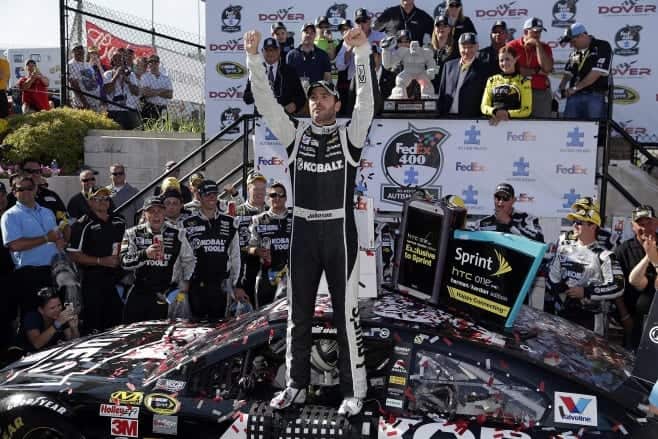 Saturday night’s Federated Auto Parts 400 at Richmond International Raceway will mark the final event of the 26-week regular season and set the stage for the latest iteration of NASCAR’s Chase playoff system. It’s been 10 years and four championship scenarios now, of heading into RIR the first weekend of September to see who’s in and who’s out. Despite all the changes and new angles being advertised of the 16 “nations” that will be competing, a few constants still remain: The field is already essentially set, Jamie McMurray is on the cusp of making it but likely won’t baring a win, and the No. 48 team is still the odds-on favorite for a seventh title.

How to Race the Chase:  The conventional wisdom of the previous formats was to average about a seventh place finish, and you’d be in the championship conversation heading into Homestead. From 2004-2013, you could count on having one bad race and still having a shot at it. The latter has eroded in recent years, with Dale Earnhardt, Jr. only really having one poor race in 2013 at Chicagoland – and it instantly took him out of title contention. Poor finishes early on are further magnified with the different stages of The Chase; if you in the bottom four after four races, you’re done, son. It will be a war of attrition in reverse in the first three races; while taking a chance at getting a win was the name of the game in the regular season, going for broke early in the going will leave you just that – broke.

Given the new nature of this format a pair of drivers who won that typically aren’t contenders at the first three races (Aric Almirola and A.J. Allmendinger), and Ryan Newman and Greg Biffle skating in by the skin of their teeth, (baring a win by another driver outside of the Top 16 or calamity on Saturday) the contenders would be wise to lay low the first three races and avoid doing anything that would lead to a DNF; conservative engine tuning, not running one extra lap for fuel, and no fender wrinkling antics – or ruffling feathers that might be a catalyst for earning yourself some payback from a non-Chase competitor.

First Losers:  The first three races are the same as they have been the last few years. Chicago leads things off, followed by Loudon and Dover. The usual suspects will perform well here; The Hendrick and JGR cars, as well as Harvick should be safe. Carl Edwards I would have considered a casualty a few weeks ago, but ever since Roush was clued in to what they were missing, the cars have pulled an about face at downforce tracks, looking competitive once again. So who among the top tier drivers will be out first? Though he finally got the monkey off his back in Atlanta with his first win this year, I think Kasey Kahne will make an early exit, along with Almirola and Allmendinger.

That leaves one more top-tier winning driver who won’t make the cut – Kyle Busch. The team is an absolute mess right now at the worst possible time. They haven’t had a Top 10 finish since the Brickyard 400, and as much as they tried to gloss over the exchange between Busch and Dave Rogers at Bristol, there is an undercurrent of discontent there that isn’t helping things. That and Toyotas have been way down on power if they try to roll something out at Chicago, it likely will explode “between the frame rails” of the 18.

Who’s The Favorite: If you don’t think it’s anybody other than the 48, you either haven’t been watching the series the last eight years, or you work at Ford. The Team Penske Cars have been fast all season no doubt; the duo have six wins and 17 front row starts between each other. Not bad for a two car team with leased engines.

But might they be taking a Swiss Army Knife to a gun fight? One of the two will surely be in the conversation at the final race in Miami, but both are likely a stretch. Hendrick brings three drivers with three wins to the table, along with Kasey Kahne’s Atlanta triumph, as well as powering Stewart-Haas Racing contenders with Kurt Busch’s victory at Martinsville and Harvick’s pair of wins – which in all honesty should be six so far. Everyone has been carping all year long that Hendrick is in their own zip code horsepower wise – and what are the chances they have a little something left in the lab come Chicago?

Harvick’s pit crew woes won’t knock him out of the first round, but will likely prove to be his undoing. Jeff Gordon’s season of rejuvenation doesn’t look to be slowing down any time soon, and the last time Alan Gustafson got one of his heroes into true title contention, they won five races and went down to the final race of the season with a shot at the championship (Mark Martin, 2009). The JGR Toyotas are down on power, but have largely been reliable. Of that trio, look for Matt Kenseth to make it to the final four. So by my count that would have the title coming down to:

That would leave one other driver to fill the fourth spot. Joey Logano? This has been a career year for him, as he is in a situation where he can flourish and is realizing his potential. That said, I think he’ll have to wait a year to make a serious charge at the championship. That leaves Jimmie Johnson, in his quest for a seventh title. A few weeks ago, some were actually suggesting they were having trouble, as they had a few poor finishes – conveniently overlooking the fact that a month prior they came within one race of winning four straight.

Chad Knaus has figured out how to win titles under every Chase format thus far, and this time will be no different. Since joining the series in 2002, they’ve only finished worse than fifth on one occasion – a sixth in 2011. Ever year Johnson won the title he earned 23 or 24 Top 10 finishes. So far he’s at 15 this year; if there’s 10 races in the Chase, and he has one so-so run, that will result in another season with 24 Top 10s, and while not guaranteeing him the title – it should result in his having a shot at it come Homestead. Then again, sometimes tires come apart, as do engines. While the old version of the Chase allowed for one bad race, the new elimination formats are not as forgiving.

It’s been a decade since we’ve had a season-long cumulative points battle determine a champion. With the Chase in its fourth iteration since 2004, this latest version will hopefully serve one of two purposes: prove to be the one that works and sticks, or the one that shows that a season-long total points payout with added bonus points for winning is what would really work – and that fans may ask for to return.

The “duo” has six wins not five. This is not a stick and ball sport. It ain’t gonna be pretty.

Why do people always count Jimmie and Chad out? Must be a compelling story they feel they must write. We have seen this dormancy before, and when “The Chase” comes..poof and presto..what problems. Then the tired and recycled stories emerge about their “comeback”..lol.

Obviously wishful thinking. But all things come to an end so one of these years it will become a reality.

I’ll kind of disagree that this new format is less forgiving of a bad race. In a way it is more forgiving. Even if you have a bad race, if you win the next one you advance automatically. Also, in segment 1 you don’t have be leading the points after 3 races, you just have to beat 4 other teams. I expect the title favorites to play it conservative in the first segment (3 top 10 finishes will advance you). The longshots (43,47, 16?) will be gambling big for a win. After that I expect more risk taking for wins from the top contenders. In segment 2, a win at Kansas or Charlotte means going to Talledaga with no worries. In segment 3, win and you go straight to Homestead. While consistency was the only true path under the old Chase, if you can win races at the right time, consistency doesn’t matter. I’m still not sold on this new format, but I am curious to see how it plays out.

I agree that wreckers-or-checkers won’t get it done once the chase starts. That counts out both Busch brothers, Kevin Harvick, and my favorite driver, Brad Keselowski. I also agree that Allmendinger and Almirola won’t be a factor. Hamlin will choke once the pressure is on, and Kenseth will fall victim to Phoenix Int’l Raceway again. Kahne’s win was a fluke and he won’t contend. Biffle has no chance. Edwards’ lame duck status will prove fatal to his chances at some point. Ryan Newman? Dale Junior? No and No. No less than Mark Martin said Joey Logano was the next best thing since sliced bread. Mark has a few second place finishes for the championship, and Logano will get his first close-but-no-cigar award. The championship will come down to Johnson and Gordon, and this year Gordon is just a little better and a little hungrier.

Of course once we get to Talledega then today’s discussion will be worthless.

Even talk of the Chase makes my eyes glaze over. A silly gimmicky format sure to give us a Champion that is anything but. Just suppose Joe Notinthechase wins all 10 Chase races. Of course he would be considered the Champion in any endeavor but NASCAR. I’ve seen children’s games with more coherent rules. The Chase! Who gives a Sh-t.

I have to agree with you on this one John Q! I think it is very scary. !! I may be surprised but zi don’t see how we can come with a true champion in this rediculous ‘ thing ‘ called a Championship Race !!!!

JohnQ. Does any of it really matter? The whole thing is a marketing ploy and nothing more. Funny thing is no matter how much I don’t like it I have to admit its been successful. Its the only thing generating any real sustained interest in Nascar. If not for it, we’d be watching it at 2 o’clock Sunday morning in between the infomercials.