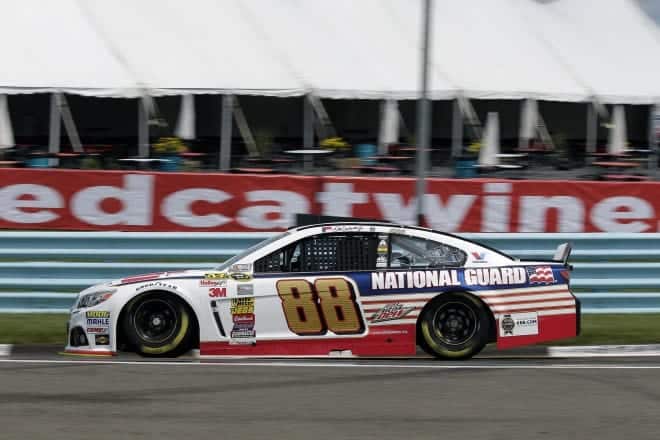 Back on Aug. 6, the National Guard announced that due to budget cuts in their marketing division, they would be leaving motorsports at the end of 2014.  The cuts affect both Hendrick Motorsports‘ No. 88 team in the Sprint Cup Series and Rahal Letterman Lanigan’s No. 15 team in the Verizon IndyCar Series.  At the time, Hendrick Motorsports stated that they had a signed contract through 2015.

On Friday morning, Hendrick Motorsports gave a very brief update on the situation.

“Representing the National Guard and its Citizen Soldiers is an extraordinary honor and source of pride for our entire organization,” the team’s statement reads.  “Communication is ongoing with regard to the future of the sponsorship, which is contracted through the 2015 season.”

Bankrupting the U.S National Guard…really. Not very patriotic! But I guess it’s understandable since you’re the most cash-strapped team in NASCAR.

Wow! Is The Felon threatening the United States government? Better watch yourself, Ricky Baby! You bought yourself out and faked illness the last time you got into trouble, but I don’t think it will work this time. I hope National Guard says “bye-bye”, at the end of the year, and when you go after them, you finally get what you should have got when you were up to your slimy eyeballs in the Honda scandal. What is the saying, rick? Ye shall reap what you sow. Threaten the government, and you will get what you truly deserve, a long, long stay in prison.