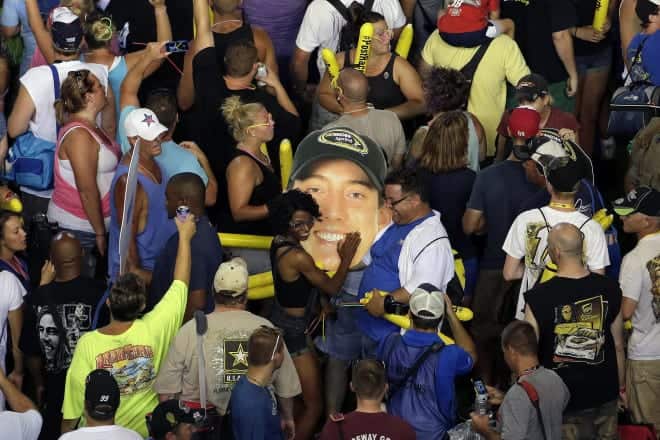 With all of the Chase hype resulting in Brad Keselowski’s domination and the lack of any outcome-altering position changes, a rather anticlimactic 400 laps was not an entire loss if you were at Richmond International Raceway. I like to see the positive in things, and after the Federated Auto Parts 400 (and with one fan climbing the fence) it was easy to see that the folks in charge at RIR have things nailed down when it comes to promotion.

In the spring, the Virginia short track staff announced something unprecedented in this day and age: a “Track Takeover” allowing any fan that purchased a ticket to go on to the track to take part pre-race activities and participate in driver question and answer sessions. Just look at the hashtag #TrackTakeover on Twitter and you will see numerous posts and photos about how many fans’ days were made from the interactive event.

Richmond decided to take it to another level in conjunction with the September event being the last race before the Chase. Fans were invited to come out onto the track again, this time after the checkered flag for a Post-Race Party. Many witnessed a front row seat to the introduction of the 16 Chase drivers (minus Jimmie Johnson after getting treated for dehydration), the faces that will be the focus of Sprint Cup Series beginning the following weekend at Chicagoland Speedway.

This kind of event takes you back to the way I imagine a conclusion to the way a race weekend used to be. The tracks cannot always control whether the racing is the best show someone has ever seen. What better way to thank fans that have been coming for years and engage those casual ones that may be there for the first time than to provide them the feeling that they are a part of the celebration? In fact, it should be a regular occurrence. It may be more difficult at some larger facilities, but it is doable.

During Labor Day Weekend, I attended the annual Budweiser International Classic 200 for the lightning fast Supermodifieds at the 5/8-mile Oswego Speedway in upstate New York. After a marathon of a race for these competitors, anyone was welcome to go down into the infield pit area after the post-race interviews and presentations wrapped up. What an amazing sight to be seen.

Win or lose, drivers and crew members were sticking around and having a good time. The setting was like being at an outdoor bar, but at the same time, with a family atmosphere. The second-place finisher signed a program for a young fan who is, most likely, going to cherish that moment. Maybe the most noteworthy driver in the field, multi-time Indianapolis 500 competitor and current Verizon IndyCar Series co-owner Davey Hamilton, was lounging in a chair shooting the breeze with his team members and others after a hard fought third-place finish.

When I have asked a handful of folks that have been around a little longer than me, in a way that is how they described it when asked what the NASCAR garage area was like decades ago. Wouldn’t it be a great idea to bring it back closer to that time?

I understand that not every driver wants to be out in the open, but I feel like some of them would prefer it instead of racing to the private jet to immediately get back home. Maybe if there were less appearances and autograph sessions prior to the race, more time could be devoted to afterward. Drivers will be fatigued, but I have felt that in most cases they seem more personable after all is said and done rather than beforehand when they are thinking about the task at hand.

Even sponsors could capitalize on this idea, with several already having hospitality tents at the facility. Why not expand it to and offer something post-race; however, this time it is not necessarily an exclusive offer which means even more faces see your product.

Then there is the logistical process. Typically people at race tracks are hauling it to beat everyone else out of the grounds. At places like Pocono Raceway for example, there is the potential of sitting in the same spot you parked for a couple hours after a race before you are back on the road. Instead of calling it a weekend right away, it would space out the time when everybody leaves. Obviously not everybody is going to enjoy sticking around afterward. People have places to be, but if they are departing at differing times, it will no doubt alleviate the traffic some.

Perhaps it is the perfect situation that is necessary to pull an idea like this off and it will not happen overnight, but one of these years wouldn’t it be neat to see around 70,000 or so fans celebrating the NASCAR Sprint Cup Series champion rather than heading directly home after the checkered flag? I think Richmond answered that question.  Fans demand accessibility and getting their money’s worth and both were delivered well into night on Saturday.

Interesting points, I hear what you are saying. Overall Nascar drivers are the most accessible to fans in all of sports, I think too much so. Many fans at the track don’t realize how good they have it. Their rudeness because they feel they are “entitled” to a piece of a driver has always amazed. Witnessed many times, and I applaud these guys composure and restraint. The awareness of boundaries and manners seem to be lacking a lot. Don’t get me wrong, plenty of fantastic fans there too. But that’s just me.

Global Rallycross does this stuff after their races, and it is so much fun. They let you go after the race and pick up different pieces of debris and things after the event. I really have enjoyed it and I am glad to see Richmond do this. Good for them!