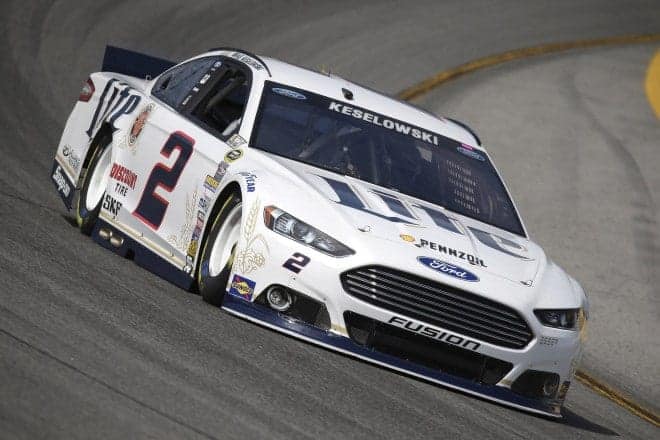 Looking for the Who, What, When, Where, Why and How behind Saturday’s race? Amy Henderson has you covered with each week with the answers to six race-day questions, covering all five Ws and even the H… the Big Six.

It’s hard enough to drive a Sprint Cup car in the heat of summer for upwards of three hours when you feel great. When you don’t, there’s an added challenge. Jimmie Johnson said he started feeling overheated in his car midway through the race, and by the time the checkered flag flew, he was clearly feeling the effects. The driver of the No. 48 said he had some cramping while he was talking to his crew post-race, and when he climbed from the car, he felt queasy and faint and had to lie down on pit road before being helped shakily to a medical cart and taken to the infield care center.

Johnson, who finished eighth, spent over an hour in the care center, where he received five liters of fluids intravenously before being released. He also missed the photo shoot for the Chase, where he’s tied for second spot.

A combination of factors kept fans from seeing much action on Saturday night. Passing was at a premium because of aerodynamic dependence, the importance of clean air and track position kept drivers from taking many risks. The race was decidedly uneventful for a short-track event, with drivers seemingly unwilling to shake things up even if they could.

The other piece to the story is that if there was racing action (and there almost always is somewhere), fans watching the race on television didn’t see it unless there was a Chase hopeful involved. Greg Biffle, racing for 20th or so, was prominently shown, but the drivers racing around him… not so much. That kind of coverage does the sport no favors.

Brad Keselowski used a lethal combination of a fast racecar, clean air, and pit selection to lead 383 of 400 laps Saturday night. After leading over 95% of the scheduled laps, Keselowski ended up where he should have after a thoroughly dominant race: in Victory Lane.

Carl Edwards won this race one year ago, but it looked as though the win was just a distant memory as he never really found his groove after starting 10th, He began a slow fade early and by the end of the day, Edwards was four laps down in 22nd. He’ll need a little momentum to kick of the Chase next week.

Many fans oppose NASCAR Chase system, and one of the reasons for that can be seen in the two points reports that NASCAR issued after the race. One of them shows the point leader as Jeff Gordon by 31 over Dale Earnhardt Jr. and 53 over third-place Keselowski. But that doesn’t take into account the Chase reset, which now puts Gordon in second place, three behind Keselowski based on his four wins to Gordon’s three. It seems wrong that the driver who was consistently the best for the whole season to date should be shuffled back after the reset. It would be one thing to award a large winner’s bonus at the time of each win, which may or may not have shuffled the points naturally, but the whole reset seems completely artificial. Yes, winning is the ultimate goal, but it isn’t the only thing that determines a great season. That used to be something race fans understood and embraced.

Another low point of the night was a caution that flew late in the race, even as teams were working their pit strategy in hopes of changing the outcome in their favor.

You might have heard about the fool on a hill, but it was a dumbass on a fence that caused the yellow flag to fly. A race fan, who was later arrested and charged with disorderly conduct and public drunkenness, somehow got past track security and climbed to the top of the catch fence in turn 4, where he sat, causing NASCAR to throw the caution until he could be brought back to a safe location. Did the fan ultimately decide the outcome of the race? Probably not, but he did deprive fans of some strategy in action.

Why… did Keselowski win the race?

This week’s answer is a simple one: nobody could pass Keselowski, whose car was so dominant that he easily led all but 17 laps, the highest percentage of laps led in an event since Jeff Burton led wire to wire in the 2000 fall race at New Hampshire, when the cars were hampered by restrictor plates. Keselowski’s cause was helped by a few timely debris cautions, which kept the field from having to pit under the green flag.

Keselowski’s performance Saturday night was stellar, but it also illustrated the continuing problem that is aerodynamic dependence and the resulting effect of clean air on the cars. It’s still all but impossible to have much side-by-side racing despite several rule changes from NASCAR, and that’s not good for the sport. A short-track race should feature drivers mixing it up, but just like two weeks ago at Bristol, they were largely unable to do so. What’s left is a spot where the championship isn’t particularly compelling, and the races aren’t always compelling, either. That leaves the drivers and the cars to draw and maintain fans, and while they’re the heart of the sport, the racing has to be able to live up to expectations as well.

JTG Daugherty Racing; AJ Allmendinger (No. 47 Bush’s Beans Chevy): Richmond was unkind to the small teams this weekend. Allmendinger celebrated with the other Chase drivers after the race but struggled during it. He was best-in-class with his 23rd-place result, but it wasn’t what the No. 47 bunch was hoping for to give them some Chase momentum.

Tommy Baldwin Racing; Michael Annett & Reed Sorenson & Mike Bliss (No. 7 Pilot Flying J Chevy & No. 36 Chevy & No. 37 Accell Construction Chevy): TBR’s improvement continues to be evident in the second half of 2014, with Sorenson carrying the torch this week with his 24th-place finish, his fifth straight top 30. Bliss and Annett had a harder time this week, finishing 35th and 37th. There is still work to be done, but this team should be proud of the improvement they have seen.

HScott Motorsports; Justin Allgaier (No. 51 Brandt Chevy): Allgaier was steady all night, finishing just one spot lower than he started, but his 28th-place run was seven spots lower than he finished in the spring race. Like most of the drivers in this group, Allgaier just never hit any stride.

BK Racing; Alex Bowman & Cole Whitt & Ryan Truex (No. 23 Dr. Pepper Toyota & No. 26 Standard Plumbing Supply Toyota & No. 83 Burger King Toyota): Whitt continues to be this team’s best driver; he finished 30th in Richmond. Both Bowman and Truex fought ill-handling cars to come home 38th and 42nd. This team should perhaps consider finding a veteran driver to help find some speed and to mentor the youngsters in a meaningful way instead of the occasional start-and-park effort.

Germain Racing; Casey Mears (No. 13 GEICO Chevy): Mears was the best qualifier among the small teams, but he and his crew could never find the feel he needed to maintain a spot in the top 25. Mears ended up a disappointing 31st after posting a top 20 in the spring race.

Phil Parsons Racing; Josh Wise (No. 98 Provident Metals Chevy): Wise, like the other small-team drivers, had a race free of drama, which is a good thing for a team on a budget. But that might have been the bright sport for Wise, who finished 32nd.

Circle Sport; David Stremme & Landon Cassill (No. 90 Junie Donlavey Tribute Chevy & No. 40 Newtown Building Supply Chevy): Cassill, who is quietly having a strong season in his Nationwide Series ride, has also had some bright moments in the No. 40, though Saturday was a struggle to a 34th-place finish. Stremme paid tribute to longtime team owner Junie Donlavey this week, and finished 36th in the temporarily-renumbered No. 90, the car number that Donlavey fielded for many years.

GoFAS Racing; Travis Kvapil (No. 32 Corvetteparts.net Ford): Kvapil was back in the seat this week, but his team struggled to a 39th-place result. They need to find a way to raise their results to the next level the way teams such as Front Row Motorsports and Tommy Baldwin Racing have done.

Jay Robinson Racing; Joe Nemechek (No. 66 Friedman Law Toyota): Nemechek was in the seat of the No. 66 this week. The former Richmond winner brought his car home in 40th spot this time around.

13 thoughts on “The Big 6: Questions Answered After the 2014 Federated Auto Parts 400 at Richmond”