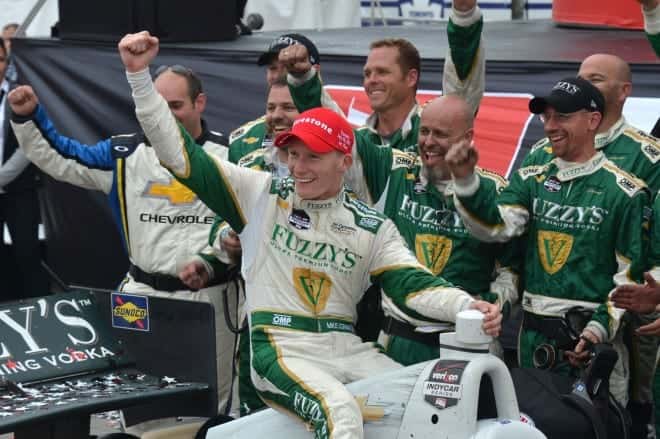 Mike Conway and Ed Carpenter Racing have hit on something special this season.

One can’t help but feel like the 2014 season was something of a lost year for Marco Andretti and the #25 team. Much like in 2013, the team started off strong and was high in the series standings early in the season. But unfortunately, Andretti’s lack of road racing prowess once again reared its ugly head, and a series of mediocre mid-season runs at such circuits torpedoed any chance Andretti had at competing for a title. Ovals (specifically Indianapolis) were once again a bright spot for Andretti, and his strong run in the Indianapolis 500 can not go unnoticed. But until Andretti can learn to run up front consistently at other tracks on the schedule, he’ll never make it to the next level in this sport.

Overall, the impression that one gets after looking back through Andretti’s 2014 season is that an unconfident Marco Andretti is an unproductive Marco Andretti. Andretti lost confidence midway through the season after experiencing a few tough results, and it all just snowballed from there. He’ll have to fix that going forward.

Few expected much out of young Jack Hawksworth in his rookie year on the circuit, and for good reason: the kid simply hadn’t made much noise before joining the big leagues this year. Luckily for Hawksworth, no one is going to forget his name next year. Hawksworth truly turned heads in his first year on the circuit, specifically at the highly visible Grand Prix of Indianapolis race where Hawksworth led the most laps in the race before a late race strategy shuffle relegated him to a 7th place result. Perhaps even more impressive was the fact that Hawksworth overachieved in historically under-resourced Bryan Herta Autosport equipment.

Ultimately, if Hawksworth can have a few more days next year like he had at Indianapolis back in early May of this year, a top 10 points finish and a few podiums could be a realistic possibility for the young driver in his sophomore season on the circuit.

For a guy that hasn’t so much as touched an open-wheeled race car in over nearly a decade,  Juan Pablo Montoya performed pretty damn well in his return to IndyCar this season. Montoya’s season got off to somewhat of a rocky start, evidenced by his failure to post a podium finish until the eighth race of the season in Texas. But man, once he got the hang of things, he took off. After that podium finish in Texas, Montoya became a consistent threat to win for the rest of the season, and collected three more podiums and a win in Pocono. Montoya even had a shot to win the second biggest race of the year in Fontana, leading the most laps in the event and proving to everyone that he is very much back to his old form.

If the man once described as the most versatile race car driver on the planet can carry his late season into next season, he could very well capture an IndyCar Series championship.

Conway is not a driver that can be reviewed in the same way as the rest of the field – because he doesn’t compete for the full season.  His duties rest with the road/street courses, while his boss, Ed Carpenter, takes on the ovals.  Hence, his final points standing, of 23rd, is a bit misleading.  Conway won two races this past season, which has to feel like a success.  He was able to keep up with the better funded teams and showed his prowess on tracks that require more than left-hand turns.  If you combine the points he earned with Carpenter’s, the team would sit in a respectable eighth position.

Rahal’s race at Sonoma is the perfect example of his season.  Leading late in the race, Rahal was holding steady, but also trying to stretch his fuel run to the finish.  Didn’t work, as he pitted with five laps to go, then faced a pit lane speeding penalty that dropped him through the field.  That’s about how this team runs.  They’ve been able to show that they’ve got speed, on both ovals and the road/street courses, but they struggle to put the elements of strategy, speed, and driver concentration together to earn a much-needed, and at this point, warranted win.  While his name helps him continue to be part of the IndyCar world, there must be a question about the promise of his career at some point.  With only two top-fives for the season, and a finishing points position of 19th, Rahal’s season must be considered a big letdown.

Briscoe is one of those interesting participants.  He can frequently be found in the top ten during some part of the race, but you have to remind yourself that he was even entered.  Oh yeah, Ryan Briscoe is there.  He’s not a bad driver, but there’s nothing about him that screams stellar at this point in his career.  Sure enough, his stats for 2014 secure this notion, as he banged out 10 top-tens – but had no victories.  Yes, Chip Ganassi’s organization struggled for the early part of the year, so it’s not surprising that Briscoe struggled to win, but maybe a few more top-fives would have been expected.  Still, a pretty solid and consistent year for Briscoe, who wound up 11th in the points.

Best Finish: 4th at Pocono
Worst Finish: 18th at the Indianapolis 500
Grade: B

The driver who seems to give some of the most upbeat interviews in the series had what can aptly be described as a lackluster year.  With just four top-fives, and 8 top-tens, Hinchcliffe was able to earn twelfth in the points, which should not be anything close to satisfying as he was the last of Andretti’s four drivers.  It’s his frustrating season that has brought on speculation that he may no longer be with the team next year.  He’s shown that he be a strong presence on the track but things never seemed to gel this year, and it’s possible that a change of scenery might be good for the Mayor of Hinchtown.