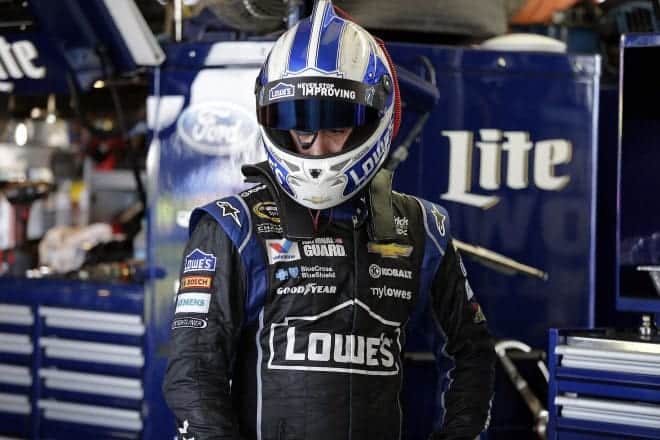 With Richmond over and the very first Chase Grid upon us, the excitement and tension is in the air now more than ever. Brad Keselowski is atop the standings, surprisingly enough. If someone would have predicted that Keselowski was going to have the most wins at the end of the regular season, I don’t know that I would have believed them, especially considering the year they had in 2013. Yet Keselowski and teammate Joey Logano have combined for seven wins this season, just three races less than Hendrick Motorsports, whose four drivers have combined for 10 race wins so far.

I also wouldn’t believe you if you’d have said Jimmie Johnson would essentially collapse on pit road after the race from dehydration. Johnson is one of the most physically fit endurance-based drivers in NASCAR—more physically fit than even some “real” athletes—and yet he was the one that needed a ride to the infield care center after the race.

And what’s even stranger is crew chief Chad Knaus didn’t immediately find anything wrong with the cooling systems in the car. It’d be one thing if one of the lesser athletically-minded drivers had had an issue, but Johnson appeared to be the only one. Shortly before the driver of the No. 48 headed off to New York for media obligations, the team found that there was a problem with the cooling system, one that was relatively new. Instead, the older system that has been reliable for them for years will return to the car to prevent any future problems.

Johnson was doing fine just the day after and will be able to race this weekend in Chicagoland, but the incident was just so bizarre. I mean, in a list of drivers least likely for it to happen to, Johnson would have to be near the top, right?

I’m sure he’ll love to bring this up if he’s among the final four in Homestead. And I think we all know he will be right?

“Did that guy on the catchfence get arrested? The race wasn’t the best but a fan should NEVER influence a race like that!!” Roland

Yes, 53-year-old James Richard Dennis – aka, “spider-man” – was arrested and charged with public intoxication and disorderly conduct. He later went on to say that he regretted what he did: “It was just stupid …. I guess we never grow up.”

My favorite part is that he said “we.” “We” never grow up, as if this was some sort of collective societal problem and we all just can’t resist our childlike urges to climb a fence anytime we see one. Man, I’m telling you what, every time I go to a NASCAR race, I have to physically restrain myself from running across the track mid-race and just kicking those fences butts with my mad climbing skills….

Come on, man. It’s great that you’re taking responsibility and all, but you were drunk as all get out and no one else joined you in this façade. Now disappear into obscurity like all the other public nuisances tend to do and leave the drunken outbursts to the tailgaters.

“I saw that Harvick and Stewart swapped pit crews. Is that permanent or just for the Chase?”  Lori

The team didn’t specify whether or not it was a permanent move, but the prevailing thought is that it depends on their performance over the course of the Chase. Make no mistake, the move is to ensure that Kevin Harvick has the best chance at winning the championship. Obviously, the issue isn’t with on-track performance but getting on and off pit road in the same position, which has been an ongoing problem for them. They can’t have that in the Chase and they certainly can’t worry about that if they are in the final four at Homestead.

It is likely permanent for the Chase and then dependent upon how the pit crew performs for Harvick. Despite Tony Stewart’s rather fragile state of mind right now, I don’t think he’ll stay docile for very long, and he won’t put up with crappy pit performance either. It’s especially true because he’s the team owner and it’s his responsibility to make sure this kind of thing gets taken care of. Once he gets back to his normal self, they had better hope they get their act together.

If this move winds up being good for Harvick, expect to see him in the final four at Homestead. He’ll be more dangerous than ever with a good pit crew.

“I saw on Twitter that there was a tire test at Homestead. Doesn’t that give an advantage to the drivers? I don’t see how that’s fair with that being the championship race and all.” Nico

None of the drivers testing at Homestead this week are in the Chase, so it doesn’t necessarily provide any Chase competitors with a direct advantage when it comes

to the final race of the season. In fact, Chase drivers weren’t allowed to participate.

Of course having a driver at a test session would provide the teams with an advantage if one team had a driver at a test when another didn’t. However, the only Chase team that doesn’t have a driver testing at Homestead is Richard Petty Motorsports (Aric Almirola made the Chase with his win at Daytona). Everyone else has a driver representing and someone to gather information from (and you can rest assured that they are).

I guess I could see how that might be considered unfair, but considering almost every team is well represented, I don’t believe it will be a determining factor in the championship race.

The fence climber was 53 years old? My guess is that this isn’t the first time he’s had a few and done something stupid and gotten arrested.

Someone I know once got trashed and climbed the infield fence at Charlotte after a race and rode a little red wagon down the banking of turn 2. He managed to avoid running into the lights at the bottom of the track, let out a triumphant rebel yell, and climbed back over the fence into the infield. Or so I’m told.

Only writers imagine Chase excitement. I just enjoy the races and tune out the constant inane Chase chatter. I can’t watch Race Hub for the next ten weeks because it is all Chase prattle all the time. I have not skipped a race all year but just might skip one of these last ten. Imagine if Joe Underfunded wins this week after running the race of his lifetime. We may actually see him for a minute or two as the entire broadcast will focus on how this development effects Jr.’s Chase standing. All the post race coverage will ignore the accomplishment except to comment on how it effects the illegitimate hackneyed Chase. Ahhhhhhhhh!