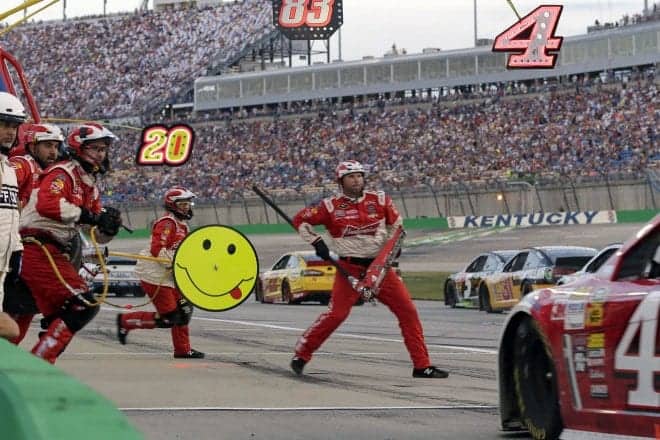 What appears to be a routine pit stop for Kevin Harvick, will actually prove to be yet another hold-your-breath moment to see if the No. 4 crew can get their driver out and not throw away a shot at the win.

For most of the season, Kevin Harvick often lost spots on pit road and was forced to gain them back on track. Following the race at Atlanta Motor Speedway two weeks ago, Harvick criticized his pit crew after they lost the race off pit road each time to either Joe Gibbs Racing’s Matt Kenseth or Denny Hamlin. Stewart-Haas Racing announced on Tuesday that it has swapped the Nos. 4 and 14 pit crews, effective immediately, beginning with the first race of the Chase for the Sprint Cup this weekend at Chicagoland Speedway.

“We made this change in the best interests of the entire organization,” vice president of competition for Stewart-Haas Racing Greg Zipadelli said in a team release. “Our primary goal is to win races and championships, and this pit crew swap provides championship experience to the No. 4 team and continued race-winning experience to the No. 14 team.”

The new pit crew lineup for the No. 4 Budweiser / Jimmy John’s team is as follows:

SHR notes that each of these members were part of Stewart’s championship-winning team in 2011.

The new pit crew lineup for the No. 14 Bass Pro Shops/Mobil 1 team is as follows:

Harvick heads into the Chase seeded sixth among the 16 drivers as he makes the Chase for the fifth straight season. His best finish in the Chase since 2004 was third in 2013.