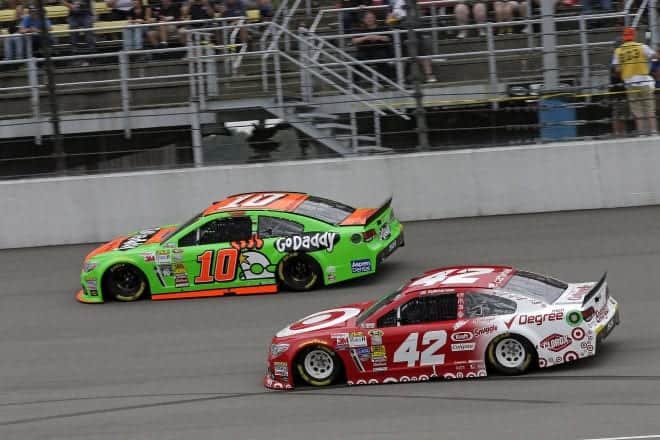 Yes, it’s certainly easy to understand all the talk about the Chase for the Championship heading into Chicago. We understand that in the real NASCAR world that what happens in each of the next three sets of races is the most important part of the season before the finale at Homestead.

However, if you’ve been in a fantasy league all season and you’ve been rooting for the Danica Patricks and Justiin Allgaiers and Austin Dillons just to finish somewhere in the top 20, you know that last 10 races in your league are about a lot more than who makes it to the next round of the Chase.

It’s part of the beauty of playing in a fantasy league. Some of the ones that the mainstream media and that sport’s main fan base care the least about, are the ones we care a lot about.

So, while there’s plenty to talk about for reasons of the Chase (and you can’t help but be intrigued by the NASCAR.com bracket), we know there are still other drivers out there who can make a difference in our fantasy season who won’t be having much to do with the Chase.

So these picks won’t really be about which Chase drivers will or won’t do well, but about all the limitless possibilities that can exist in fantasy auto racing.

Jimmie Johnson seems to know when the right time to have his best stretch of the season and it would be no surprise to see him finish up front Sunday. While Johnson has yet to win at Chicago, he has finished second and fifth in the last two races there while leading 212 laps, easily the most among active drivers. For his career at Chicago, Johnson has led 577 laps with seven top fives and 10 top 10 finishes in 12 races there.

A driver who has won twice in his career at Chicago is Kevin Harvick. He has seven top five finishes in his 13 career races there. In his last two trips to the Joliet, Ill., track he has finished third and 12th. And with the way he has been running this year, it would be no surprise to see him at the front of the pack near the end of Sunday’s race.

It’s true that Matt Kenseth has yet to win this season, but it’s also true that he has been the most consistent finisher for Joe Gibbs Racing. Chicagoland could be one of Kenseth’s best chances at winning as he has one win in the last two races there and has five top 10 finishes in 13 career races. Kenseth has also led the second most laps among active drivers at Chicago behind Johnson, at 437.

The bad news for Kyle Busch is that he did not contend at Richmond last week, a place where he had traditionally been very good. The good news for Busch is that Chicagoland is a place where he has been pretty good, too in his career. Busch has one win in nine career starts there and four top five finishes. But in his last two trips to Chicagoland, he has finished second and fourth. So maybe things starting all over again in the Chase will be even more good news for Busch.

Right out of the gate here, it would be no surprise to see Brad Keselowski win his second straight Sprint Cup race. Keselowski has won one of the last two races at Chicago and was seventh in the other race. In doing so, he has led 78 laps in those races. In his five career races at Chicago, he has three top 10 finishes. Those numbers, combined with the way he has run this year with four wins so far, make him a pretty safe pick this week.

Tony Stewart fans were certainly disappointed he didn’t make the Chase for the second straight year and one of the real reasons for that, especially under this new format where a win gets you into the next round, is that Stewart has been very good at Chicago. So, if he could’ve just gotten in the Chase, he would’ve been one of the favorites to get to the next round. Stewart has three career wins at Chicago in 12 races and finished in 10th or better on 10 occasions. His career average finish of 8.5 is best among active drivers with more than one race at Chicago.

Well, it’s pretty much the general rule that if you pick Keselowski, then you have to pick teammate Joey Logano, too. That’s because if one of them is running well, the other is likely not too far behind. The numbers for Logano at Chicagoland aren’t great as his only top 10 finish in five career races there has been a seventh. But Logano is a contender at any track, so it’s hard to pass him up.
A driver who is hard to pass up when making picks in these first two Chase races is Ryan Newman. He has finished fifth and 10th there in the last two races and has one career win among his eight top 10 finishes in 13 career races at Chicago. Newman may be the quietest driver in the Chase, but I fully expect him to make it into the final 12 in the Chase.

So now that we are down to the final 10 races, if you’ve saved some of the key drivers that belong in this spot (like those on the C list on Yahoo!) if you are on pick limits, it’s time to use them. Kyle Larson will remain as the top choice to use here, even though this is his first career start at Chicagoland. Then, too, there is Austin Dillon, who also is making his first career start at Chicago.

But guess who else must seriously be considered in this spot now? That would be Danica Patrick as she has finished sixth and 16th in the last two races, which were on completely different-styled tracks. Patrick has been 20th and 25th in her two career starts at Chicagoland, so she has a legitimate shot to finish inside the 20 again this week, which is just fine for your final or cheapest option.
The only other possibility here is Justin Allgaier, who finished 27th in his only career start at Chicagoland.

The overall season leader in the Frontstretch League on Yahoo! Remains NoBarNASCAR with 7,098 points, followed by Mojothemonkey with 7,043 and LeftTurnOnly at 7,019. The biggest mover of the week was TeamTaxicabs moving up five spots into 39th overall.