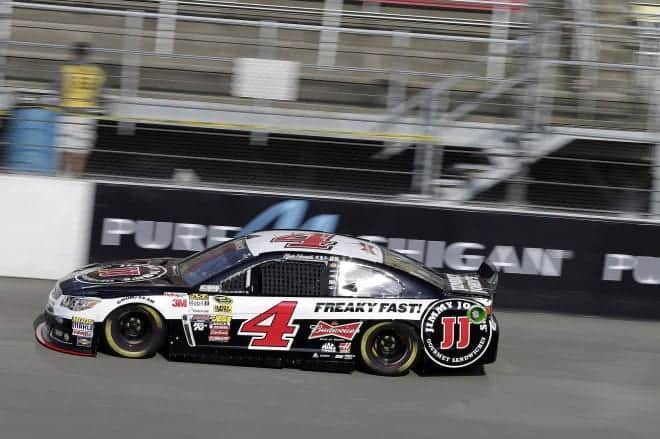 Stewart-Haas Racing announced on Wednesday that they have signed Ditech Mortgage Corp. to serve as an associate sponsor on the No. 4 Chevrolets driven by Kevin Harvick. The deal is a multi-year deal that begins immediately.

DT Holdings (parent company of ditech) President Patti Cook is very happy to be associated with NASCAR and Stewart-Haas Racing.

“At ditech, we’re all NASCAR fans,” Cook said. “NASCAR is part of the fabric of America and so is ditech’s goal of securing home ownership for as many Americans as possible. Everyone – from our employees to our customers – can’t wait to cheer on Kevin’s amazing team on the racetrack.”

Harvick is onboard with ditech’s non-confrontational approach to selling home mortgages and believes that Stewart-Haas Racing will benefit from their relationship.

“What ditech stands for are the same things I stand for,” Harvick said. “Anyone who knows me knows that I’m pretty direct, and that I expect people to be treated fairly and honestly. It’s how I operate, and it’s how we all operate at Stewart-Haas Racing. Our expertise is in racing, and ditech’s is in the mortgage industry. Together, we make a powerful team that delivers on and off the racetrack.”

For Ditech, it is a return to NASCAR. Starting in 2003, Ditech (at the time, a part of GMAC) served as a primary sponsor of Hendrick Motorsports’ development program, which was run in conjunction with NEMCO Motorsports in the NASCAR Busch Series and the ARCA Re/Max Series. Ditech’s (at the time) black, blue and purple colors were carried on No. 87 Chevrolets driven most notably by Kyle Busch, but also by Boston Reid and Blake Feese. In 2005, Ditech served as a co-primary sponsor on Brian Vickers’ No. 25 in the NEXTEL Cup Series along with GMAC Financial Services (now Ally Financial).