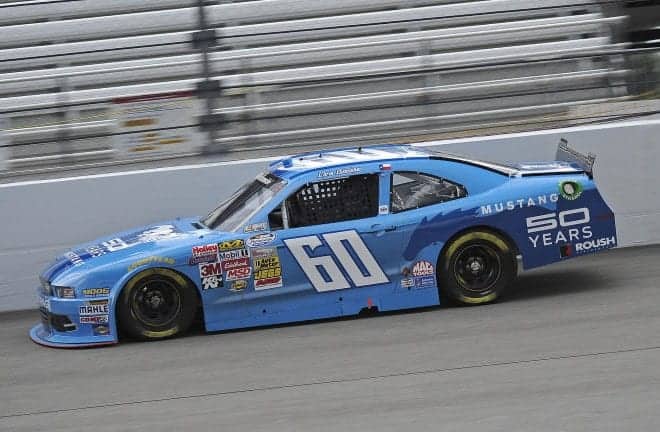 It has been a long year for Roush Fenway Racing, and a season full of trials and tribulations for the organization is nearly in the books.

However, with eight events left in the 33-race long period, there are still plenty of chances for the Ford team to get a few victories – something that has mostly eluded it in 2014.

That’s important, because the team sorely needs it.

Each of the team’s three drivers have shown signs of weakness over the course of the season; none of them have more than four top 5s. But though they have had some frustrations, Trevor Bayne, Chris Buescher and Ryan Reed are comfortably inside of the top 10 in points entering Chicagoland Speedway, showing that there’s at least something there other than struggle.

But the problem for Roush Fenway Racing goes beyond the race track. On the Sprint Cup Series side, there are problems as well – and the Cup team’s issues have clearly effected the Nationwide Series crew in a negative way. With management issues occurring, 2015 could not come soon enough for a team that had high expectations entering the season.

Buescher has the team’s lone win this year at Mid-Ohio, but he missed the season-opener at Daytona. Even if he made that race, it wouldn’t have made much of a different since he is currently 169 markers behind Chase Elliott for the championship lead. Moreover, he has been far more consistent than Reed, who entered this year with six starts with the organization in 2013.

For Reed, it has been an extremely tough rookie season. He recorded his lone top-10 finish at Daytona in July. Besides that, he has raced just outside of the top 10 for the entire year. It is clear that he isn’t missing much, yet there is still something absent. That something seems to be infecting the entire organization.

Bayne was considered to be one of the championship favorites, yet he is running extremely close to the way he did last year. In his second straight full-time season, the 23-year-old is still searching for his first win of 2014. Working with Chad Norris instead of Mike Kelley this year could be the difference maker for the 2011 Daytona 500 champion. The chemistry does not seem to be there, and the team is often behind as soon as it unloads off the truck.

In 2015, though, we won’t be saying Bayne in the Nationwide Series, at least on a full-time basis. He’ll be taking the No. 6 back to the Sprint Cup Series with Roush’s team. The number, made famous by current driver coach Mark Martin, will make its first appearance at Daytona after not racing since Ricky Stenhouse, Jr. raced it to a 39th-place finish at Homestead in 2012. With Martin’s help, Bayne might be able find his way into Victory Lane in the Cup Series next year.

However, with the competition increasing, driver coach Martin needs to be key for the team’s Nationwide Series talent, potentially the future of the team in NASCAR’s highest level.

Buescher and Reed could use his veteran experience in multiple ways, as he had an average finish of 13.9 in 882 starts in NASCAR’s premier division. As one of the most consistent racers over the last 30 years, Martin is arguably one of the best drivers to never win the Sprint Cup Series title.

And that’s really the kind of thing they need, because Roush Fenway Racing doesn’t have the speed it needs this year. Besides having some bad luck every now and then like most teams experience, Roush has struggled with the setup on their three cars. If the organization can nail down the setup, then the lessons Martin can teach can follow. Suddenly, perhaps, Roush is a bit more of a presence in the Nationwide Series field.

As the season wraps up, Buescher is looking to gain momentum for 2015. If he continues the pace that he is on, the 2012 ARCA Series champion is going to be a title contender. However, Reed is going to need some work. Racing with Type 1 Diabetes is tough enough, but he has taken some hard hits this year. Those hits have taken plenty of money out of the team’s pockets. More importantly, Reed has lost out on running more laps in order to gain experience.

But with Roush’s “Driven” program, the organization has high hopes for both drivers as they gear up for next year. They just need to get back on the right track.

Roush’s lone win came in an event where there were no Cup drivers so the competition was esssentially equal. We have no idea how good or bad their drivers are because they rarely get the opportunity to test themselves against others in their class. Do you think maybe that knowing before the green flag waves that the best you can finish is sixth could have a negative impact on a young driver? Or, does deviating from the NASCAR PR spin that young drivers and fans alike love watching Cup drivers lap the field within 20 laps week after week get you in trouble? The free fall attendance suggests that fans are increasingly disinteresed in Extended Cup Practice. Keep writing this mail it in drivel. An actual honest appraisal of the state of NW will just make your thinky thing hurt.

Last year, Roush’s lone Nationwide win was at Iowa and it was Trevor that gave it to him. Maybe Trevor can win at Chicagoland or Dover, where he was second before. Or maybe Kentucky, which is a standalone. The Cuppers will be off in New Hampshire, so it could be a strictly Nationwide field or very close to that.

Trevor would have a win without Cup drivers in the series. He was the best Nationwide driver at Dover, about 1 second behind winner Kyle Busch. Trevor led some laps when he was 2nd at Chicagoland, but was passed by Chase Elliott late in that race. Speaking of Chicagoland, that’s where they are this week. I hope Trevor can be best in class. If he has no trouble he can’t recover from, he could continue his top-15 streak.

Racefangurl, Obviously you follow the series closely, and judging from your posts you know what you are talking about. I used to love watching drivers develop in the trucks and Busch cars on their way to the Cup. Mark Martin annoyed me but I still watched. Now with the dirty half dozen Cuppers battering the field every week I can’t watch more than a few laps. Has the Cup invasion lessened or heightened your interest in the series, or had no effect at all? How do you cope with knowing the top 5 finishers before the green flag drops?

I follow the series as close I do because of Trevor. He’s my favorite and I see no Cup stars will be at Kentucky, so I hope he can be a contender at the end of the race. I never followed the series before I knew about Trevor, which means 2011. I learned his name the day of his Daytona 500 win. The Cup drivers stealing wins from drivers like Trevor bothers me, but not as much as before Trevor’s first Nationwide win. When there’s Cup stars present, I know unless they have trouble they’ll be in the top-5, but I focus on Trevor more. I just hope he can run strong and have a good finish. I don’t have cable TV at home, so I can’t always watch. I follow online. I’m a race fan first and a fan of my favorite drivers second, but I care about my drivers.