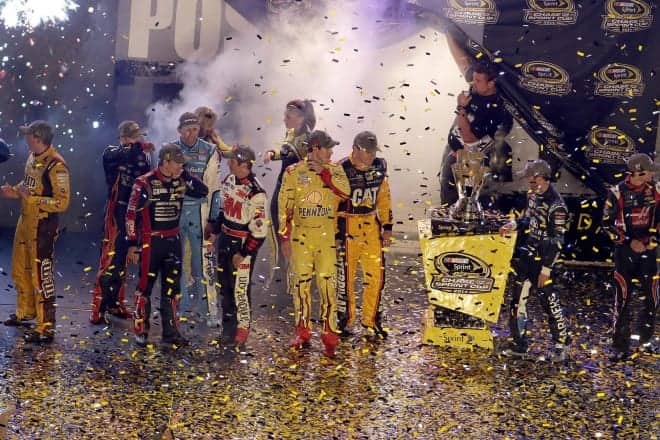 Well, it’s finally here. NASCAR’s new look version of the Chase is kicking off today with levels of pomp and circumstance that could rival even the best of a P.T. Barnum-run circus. All week long, the 16 Chasers traveled across North America as part of NASCAR’s tireless promotion of the new format. Today, we’ll get a glimpse of whether or not all of that hype was well-founded.

As for the race itself, no one quite knows what to expect. With an automatic pass to the next round of the Chase on the line courtesy of a win, the way drivers choose to race today will give us a pretty good idea of how the racing will be under this new format. It could be exciting, it could be boring, it could be something in between. Who knows? That’s why we watch right?

1. How will the Chasers approach the first race of the playoffs?

The popular sentiment among the drivers and teams this week in regard to the new-look version of the Chase was that they all have absolutely no idea how this year’s playoffs would unfold. No one has any idea what the best strategy will be, or what the pitfalls will entail. There is just a general sense of unknown surrounding the whole deal.

That is why today’s race ought to be so intriguing. The 16 Chase drivers are all likely to approach today’s race in different ways, and the nature of Chicagoland Speedway will likely only complicate matters further. For as much flak as Chicagoland gets for putting on “boring” races, the track has at least shown every year that there is no singular strategy for winning here. Some races have been won via fuel mileage, others via tire conservation (Chicago has a bumpy and abrasive surface a la Atlanta), and others via raw speed and racecraft. My guess is that all three of those strategies will be employed by different teams in a desperate effort to get that all-important win.

Wins are now more important than ever, and with 16 teams all vying for a unique way to get one in the first race of a new playoff format, today’s race could be the most intriguing Chicagoland race of all time.

2. Can Team Penske continue their dominance on a track that’s in their wheelhouse?

2014 has arguably been Team Penske’s most complete season as an organization since joining the NASCAR ranks in the mid-90s. For the first time in the team’s history, both of its cars are legitimate contenders for the championship and threats to win each and every week. Brad Keselowski and Joey Logano have combined to collect seven victories on the season, and each of them have won this season at tracks that are awfully similar to Chicagoland (Keselowski won at Las Vegas and Kentucky, and Logano won at Texas). Granted , they’ll have an uphill climb today (both are starting in the mid-20s), but most indications are that they still have quite a bit of speed this weekend.

Given how strong the team has been in recent weeks (Penske cars have won two of the last three races), another win by either driver would put the organization in awfully good shape for the rest of the Chase, and that is not something that the competition wants given the fact that the rest of the Chase schedule is filled with Penske-circa-2014-friendly race tracks.

Keep an eye on the Penske cars today, because not only do they appear to be the team best positioned to get an early jump on the rest of the Chasers, but also because if they do so, it could signal that they will be the team to beat for the next nine races.

3. Will Jimmie Johnson finally wake up?

With how strong Jimmie Johnson has historically been on a week-to-week basis throughout his entire career, it always seems somewhat alarming when he goes into any sort of a slump. But usually with him, the slumps don’t last long. Maybe two or three races where he’s off the mark, four max.

Sadly for Team 48 fans, Johnson is mired in an unconventionally long slump at the moment, and is currently carrying next to no momentum heading into the Chase. His team went eight straight weeks this summer without scoring a single top 5. For most of the summer, the entire No. 48 team looked out to lunch.

Bristol and Atlanta were at least somewhat of a turnaround for Johnson, as he posted back to back top-4 finishes, but even at that, he had to scratch and claw for those fourth-place finishes in each race. The prevailing thought heading into the Chase right now regarding Johnson is that he and his team just seem flat.

The question that all of this begs of course is as follows: could it all just be an illusion? Could Johnson and Co. have simply been testing throughout the summer in preparation for the Chase? They probably were, but so were a number of other teams. It will thus be interesting to watch how the No. 48 team performs on Sunday, because if the car comes out of the gate with speed, we’ll pretty much be able to surmise that their summer slump was just an anomaly and that they will be competitive in the title hunt. After all, it’s not like we haven’t seen this from the No. 48 team before.

However, if Johnson and Co. finish the day with another uninspiring performance, it could be a sign that the defending champ may not be the threat that some are assuming he will be.

Pretty much everyone who follows the sport is aware of this particular storyline, as the week to week mediocrity of Joe Gibbs Racing this season relative to their stellar 2013 performance has been a big topic of discussion all year long. With Kyle Busch and Denny Hamlin limping into the Chase on the strength of weak, flukey wins, and third driver Matt Kenseth barely squeaking in on points, it is easy to see why many have already written the team off as far as the title is concerned.

But alas! Here we are, Sunday morning, and guess who is on the pole? Yup, that’s right, Kyle Busch. And guess who is starting fifth? Matt Kenseth. Yes, the starting spots were earned partly because group qualifying was rained out, but both drivers earned their starting spots courtesy of stellar practice speeds.

Indeed, seemingly out of nowhere, it seems that JGR has magically found some speed after weeks of toiling for even mediocre results. Perhaps a summer of R&D work and frustration has helped the team hit on something for the Chase. We’ll just have to find out today.

At any rate, regardless of what happens today, JGR’s performance will be something to keep an eye on both today and through the rest of the Chase, because with how well-resourced this team is, they are never more than a few tweaks away from being competitive.

“will Jimmie Johnson finally wake up?” Answer: Yes, like he always does. The performance of the 48 team over the last month, month and a half is not indicative of how he will perform for the last ten races. The 48 team always has operated this way and this year will be no different.

“There is just a general sense of unknown surrounding the whole deal. That is why today’s race ought to be so intriguing”

It’s a shame that the racing has gotten to the point that the race itself isn’t intriguing without the chase.

Tangential I know, but I really am Chase sick. I read a good deal of complaints about the quality of racing at various tracks, especially the 1.5 milers. It seems to me that the problem is not so much the tracks as the aero characteristics of the generic cars. If they were less aero dependent and thus able to actually pass wouldn’t it be possible to have an exciting race around the Walmart parking lot? Educate me, the racing press seems unwilling to.

What is interesting is that IROC racing series failed to draw much of a fan base because of the generic cars with generic engines yet this is the very business model that the front office of NASCAR is using, (and, along with much of the race media are calling successful). Here is a crazy concept; ditch the chase, more points for wins, softer tires, less aero, less “large team/satellite-team” dependency and a greater variety of tracks. Let’s start there and see what happens.