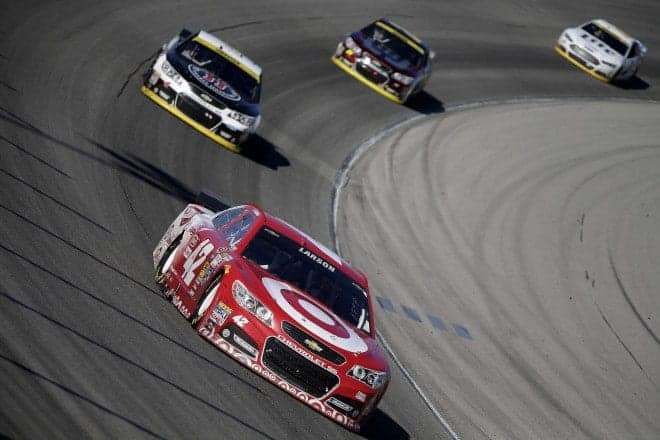 Kyle Larson has lived up to the hype that preceded him prior to the start of the season. But what about the rest of the rookie contenders? Credit: CIA Stock Photography

Kyle Larson turned up the aggression and performed remarkably in the closing stages and during much of the MyAFibStory.com 400. In his first Sprint Cup Series start at Chicagoland Speedway, the rookie who just missed out on a spot in the new ten-race Chase format showed no weakness as he fought season-long championship contenders Brad Keselowski and Jeff Gordon for the win down the stretch. While he lost out on the battle in the end, it could have very well been a different story that  changed the complexion going into New Hampshire and Dover.

But for a moment let’s forget about points. In fact, the points can take care of themselves when stories like this one come into play. Remember when the season came to a close in years past the focus among drivers, teams, fans, media, etc. was almost entirely on the race itself, even if there was a close point battle? I understand NASCAR and their strategy/thought process to create a playoff moment. It works near perfectly for so many other competitions, and it can work in auto racing, to an extent. The difference is there are still 43 cars on the race track every single week.

Larson’s performance, and even teammate Jamie McMurray’s strong run early on, shows that there are still goals for them to achieve. Larson raced Keselowski as hard as he could on the restarts even with a tire rub during the final one, and then continued, albeit unsuccessfully, to hold back Gordon for the second spot. A driver not in title contention going easy on someone who is, has been debated before. I applaud Larson for not giving another inch of room, and it appears his fellow racers agree whether it is regarding a driver that is not in the points race or one that has already advanced.

“I think everybody goes out there to race to win,” Gordon said in regards to Keselowski now advancing to the next round.  “I don’t think that’s going to change for those guys.”

In addition, Gordon was extremely satisfied with Larson’s skill to race him hard near the end.

“I like seeing young guys out there driving like that.  That’s so much fun.  That’s what this sport is all about.  I just want to let him know what a great job I thought he did.”

Although the Chicagoland race was fairly uneventful, much like Richmond the previous week, and finished with the same one-two result, there were some intense challenges and passing for the lead throughout the field this time around on almost every lap. This type of racing is what the tracks promote foremost to get fans in the stands, and NASCAR needs to walk the fine line between helping these facilities achieve the goal and promote what is in store in regards to the end-of-season outcome. However, it seems like as the years go on the latter is being weighted a little too much.

Each and every driver and team has to remain cognizant that the smallest of changes presents differing implications. If a driver not in contention wins, then consistency becomes more of a factor once again as far as the championship goes. There could be the possibility that a team like Larson’s hits on the setup at Homestead and it comes down to the most consistent run that puts an eligible driver in the best position near the end of the race. Judging by Sunday’s events, there is no doubt that a driver with nothing to lose is not going to hold back.

“I think the way I was racing was okay.  I don’t know if he thought the same thing,” Larson said referring to his battle with Kevin Harvick late in the race.  “But I had a lot of fun.  When he was around my outside, I felt like he was doing the same thing.  I thought we were racing hard but clean.

“Those guys might be a little bit more cautious, won’t race you as hard.  I didn’t feel that way at all.  I felt everybody was racing as hard as they do all season long.”

It sounds like an act of a lot of racers simply just being racers. Hopefully we head to New Hampshire Motor Speedway and are once again talking more about the racing that went on rather than the ongoing mention of the Chase, much like Chicagoland.

Much has been made of Larson (time will tell). A bunch of us watched Gordon go over to Larson and we had a unanimous different take from what other say happened. If you were going over to “praise” someone, would a handshake a pat on the back and a big smile be the way to go? Jeff went over to him, leaned in and started whispering in his ear. Larson has the personality of a wet rag and as usual, showed no emotion. I know what they both said afterword’s, but the exchange looked funny. Jeff has been know to show his displeasure (when running up front) to have someone “race him”. Looks to us like he was letting Larson know he was not happy and then Jeff quickly walked away. It was weird. IOHO.

Both of the Glam Twins get a little teary-eyed when they have to go for it instead of just being allowed to cruise while others get out of their way. Larson may not be Tim Richmond on the mic, but frequently he’s been fun to watch, which hasn’t exactly been a theme this year across NASCAR’s top 3 series.

If Jeff was unhappy, he can go pack sand and get used to being outrun by Kyle in the future.

Kyle Larson has had an exceptional rookie year thus far. He is talented, driven, and for now, over hyped. If you read Frontstretch writers weekly predictions but did not get around to watching the races you would think that Kyle Larson has already won 20 races this year and finished no lower than fifth in the others. The racing press has given us a season long Victory Celebration lacking only, a victory. Get a grip.

Amen! I’ll sing his praise when their is something to sing about, right now..meh.