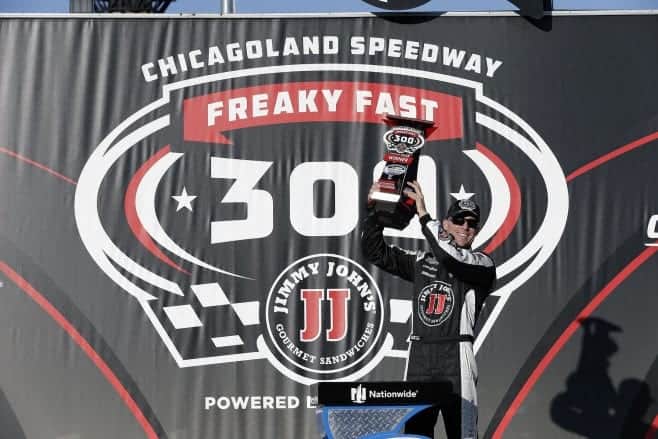 Kevin Harvick took advantage of a gutsy two-tire call by his crew chief Ernie Cope and Kyle Busch‘s poor track position with 39 laps to go to win the Jimmy John’s Freaky Fast 300 at Chicagoland Speedway on Saturday afternoon. The victory marked the fourth win of the season for Harvick and the 44th Nationwide win of his career. For JR Motorsports it was their ninth win of the season.

Harvick led 43 laps on the afternoon and held off Kyle Larson by 2.108 seconds to claim the win. Kyle Busch completed the sweep of the top 3 for the cup regulars in third, Ryan Blaney finished fourth, and Trevor Bayne rounded out the top 5 as the highest finishing Nationwide regular.

For much of the afternoon it was looking like another virtuoso performance by Kyle Busch as he led a race-high 141 laps. However, the cautions fell the right way and pit strategy came into play, leaving faster cars such as the No. 54 of Busch and the No. 9 of Chase Elliott near the tail end of the lead lap in the late stages. Meanwhile, Harvick was able to keep clean air on the nose of his No. 5 Chevrolet and pull away.

Ryan Blaney continues to get the job done for Team Penske in the No.22 Discount Tire Ford.  Blaney’s fourth-place finish on Saturday was his sixth top-5 finish in ten Nationwide races this season. His only finish out the top 10 came at Talladega in May. The battle for the NASCAR Xfinity Series championship ought to be very interesting next season if, as expected, Blaney moves up next season.

Ty Dillon would still be right in the thick of the championship battle if not for Mid-Ohio where he finished 19th. He has eight top 10s in his last nine races to go with his win at Indy in July. Dillon needs to take advantage of a minimal Cup presence next weekend at Kentucky and hope for issues from Elliott and Smith to gain a few points back.

I keep waiting for Dylan Kwasniewski to finally progress in his rookie campaign in the Nationwide Series, but that has yet to happen. He is only 12th in points with three top-10 finishes in 26 races this season. His best finish of eighth came at Daytona in February and at Mid-Ohio in August. A 17th-place finish at Chicagoland on Saturday may not be the biggest of his concerns as an ownership dispute at Turner Scott Motorsports has the entire organization suffering from top to bottom. Kwasniewski does have immense talent and should be racing better, but it may boil down to being in the wrong organization.

Where has Brendan Gaughan gone? It has been a nightmare for the Las Vegas native since his emotional win at Road America in June. Only two top-10 finishes in his last twelve starts has the No. 62 team scrambling to right the ship. While it may be too late for 2014, Gaughan can still establish momentum for 2015 with a strong closing stretch of races to close out this season.

It seems as if Denny Hamlin‘s luck from the Sprint Cup Series carried over to the Nationwide Series on Saturday when a blown engine in his No. 20 Sport Clips Toyota ended his day on lap 165.  Hamlin has to be hoping his bad luck has come and gone before the one that matters on Sunday.

Underdog Performer of the Race :

Daniel Suarez is already turning heads after his second career start in the Nationwide Series. Suarez scored a 15th-place finish in the No.29 for RAB Racing on Saturday. He finished 19th in his series debut earlier this year at Richmond.

4 of 40 cars decided to start and park

Chicagoland Speedway provided its usual crazy pit strategies and made for some interesting restarts down the stretch. Expect more of the same at Kentucky next weekend, a race track very similar to Chicagoland. Car balance and track position will be key as to who scores the victory. Also it figures to play a huge role in this year’s championship battle with a lack of Cup Series regulars in the field.

Stop! Just stop! It was another mind numbing Cup Practice session. Stop lying to us, at least so transparently. Nobody is buying it anymore. There were so few people there that they could sit one to a section and there would still be empty sessions. You are like the husband coming in at 3:00 AM disheveled and smelling of perfume with a slight hint of seafood. You did not get stuck at the office watching a race. There was NO race. Ahhhhhhhhhhhhhhhh!

I caught the last 20 laps which is time I will never get back. Listening to the announcers go on-and-on about how the double-duty Chase drivers were learning a lot during the race which would help them on Sunday was painful. If there were Nationwide drivers on the track we sure didn’t hear about them, (at least for the last 20 laps).

Chris and John,
I share your disgust with this unwatchable series. Fortunately, I did not waste a millisecond watching the cup practice session as I knew exactly how the script would turn out. Why not under “the ugly” don’t you put something about the cup drivers making a complete mockery of this series? Because it is UGLY. Also, you so called “journalists” love to keep telling us the fans come to the busch races to see the cup stars. Oh really? It looks like a ghost town at these “races”, so that’s a complete lie. And I had to laugh when you mentioned the “gutsy” two tire call. Really? This team isn’t racing for the damn championship, they have nothing to lose. Nothing freaking gutsy about that damn call.

I agree with the other contributors, Nationwide racing is pathetic. If I were a small owner or sponsor,
I would spend my money in another series. They have no chance to make a dollar or for their drivers to grow. Limit the Cup participants!

Come on now, no complaints. Kevin drives for Junior and Kelly whos big investor is Big Rick, so all should be very happy…after all Kyle didn’t win….lol.