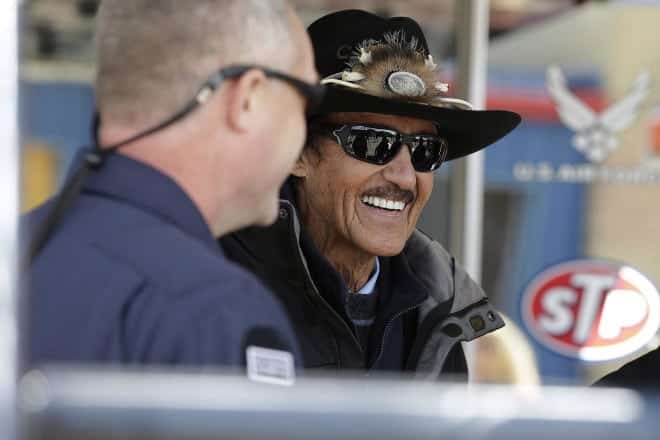 Aric Almirola is driving like a man with nothing to lose. King Richard Petty, in a year filled with sadness sees light at the end of the tunnel, in the best position to win with his cars since handing the keys to investors several years back. Crew chief Trent Owens, in his first year on the Sprint Cup level, is quietly becoming a mechanical mastermind. The pieces, if put together right were there for David to rise up and challenge a Chase full of Goliaths.

Too bad their engine refused to slip inside the slingshot.

It was a blown Doug Yates motor, erupting in a cloud of smoke that turned Chicagoland into a cemetery for the Chase hopes of Richard Petty Motorsports. Almirola, armed with momentum was a surprising top-10 performer, putting pressure on bigger names with better budgets (see: Carl Edwards, Matt Kenseth, Kasey Kahne) before seeing his power go sour.

“Heartbroken, I think is the easiest way to describe it,” he said, sitting in the garage with a busted car and little consolation, apart from a hug by team owner Petty. “It just wasn’t meant to be.”

It was the bright spot turned bust, at a track who always seems to bust the dreams of one unwitting playoff participant. So, just like that, the 2014 Chase went according to plan, Roger Penske’s Brad Keselowski won race one while the two lesser-funded drivers, Almirola and AJ Allmendinger sit on the outside of the top 12 looking in. Greg Biffle and Ryan Newman, the others currently “set for elimination” within the field of 16 are not surprises; they have been incapable of running up front most of, if not the whole year. While non-Chaser Kyle Larson’s run was incredible, at the front of the field the postseason comers and goers were much of the “same old, same old” as the top 12 try and pace themselves for two months of combat.

Almirola had set out to change all that, the soft-spoken driver showing confidence this month in what’s been a difficult time for his organization. Teammate Marcos Ambrose, whose contract was up in November will not return, heading back toward his native Australia after years of underperforming in Cup. Gone along with him is backer Stanley, likely jumping ship to new Toyota man Carl Edwards and suddenly, there’s both a sponsor and driver hole at the No. 9. Almirola, whose No. 43 team has often been looked at as a red-headed stepchild, is suddenly the present, not the future of the franchise.

However, there is a silver lining in the midst of mechanical disaster. The way in which Almirola conducted himself after the Chicagoland race bit another Chase hopeful (2013: Dale Earnhardt, Jr.; 2012: Jeff Gordon) showcased the personal growth one needs to become an organizational leader, not a sidekick. Almirola could have moped after this setback; instead, he motivated, while reminding his team how far they had come.

“We have nothing to hang our heads about,” he said. “We know we are capable of running in the top 10. Everyone else might not think so, the rest of the world thinks we are underdogs and we will gladly accept that tag. But what we’ve shown today, and the last two weeks is exactly what we are capable of.

That’s exactly the talk this team needs to move forward, not backwards while facing a potential 2015 reshuffle. It’s the type of resolve we haven’t seen from Petty’s No. 43, driven by a myriad of drivers over the past decade since Bobby Labonte slid behind the wheel in the mid-2000s. And even that former Cup champion, for all his accomplishments never could do what Almirola already has: take the car back to victory lane.

Petty, whose year has been a rollercoaster of rough news (losing wife Linda earlier this year) may have the right guy, a debate that’s raged on ever since Almirola was named to fill the seat a few years back. Armed with manufacturer support, after flirting with losing Ford earlier this year Petty understands the core he’s growing. Now, all the team needs is a little luck. If only Almirola had held on, a top 10 would have left him in position to potentially break through to the next round. What’s sitting there? Kansas, a track where the No. 43 has run strong in recent years only to be struck with tire problems. The opportunity to stun the world was there.

Now, it’s an opportunity to grow.

“We have to win,” said Almirola. “There is no other option. We have to figure out how we can win one of the next two races.”

It’s a next step that may not happen this year. But Almirola, in one sense has already gone out and won in this Chase.

He turned some heads.

That’s just about as positive a spin on RPM’s 2014 season as can be imagined. Most people, myself included, saw the #43 team’s rain-shortened Daytona win as a combination of luck and being in the right place at the right time. Sure, sometimes you make your own luck, but at the restrictor plate tracks, you still have a better chance of winning due to luck than by being the best car. I’m not taking anything away from Almirola, but RPM is, at best, a second tier team that has made very little progress towards being a championship contender in the last couple of decades. Owners, drivers, and crew chiefs have come and gone, but you can count the wins by RPM/Petty Enterprises over the last 20 years on your fingers. I have seen no evidence that this will change anytime soon.

RPM has gotten better over the last season. I was actually a little bummed when I saw Aric’s engine give up with 30 to go. I agree with Carl that RPM is a second tier team but hopefully next year they can step it up a little more, (although I don’t expect to see RPM beating out Hendricks/Roush/Gibbs).

Thank you for a glimpse of a driver and team that is not one of the NASCAR favored few. Sometimes it seems as if the entire series is made up of about a dozen drivers from three or four organizations.

You mean its not?

In order to better fund the team with motors and technology, maybe Richard should dig out a little of the STP sponsorship bucks he stashed away for years. I doubt his 401K is hurting.

Once a business/team relinquishes control of their product, they accept also ran status. Seldom if ever do you see the customer outdo the originator. There may be sound business reasons for this, i.e. survival of the company, but the fact remains. So dont expect too much from RPM going forward. They will hang on and make money for the investors. Unless of course Nascar drops the 4 car per team limit.