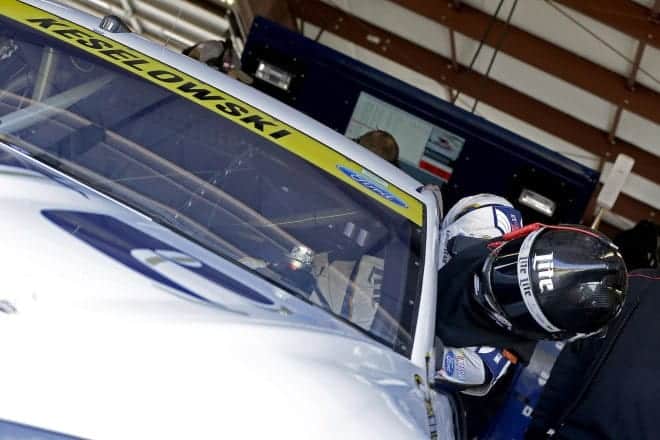 The talk on Sunday was mostly about the Chase competitors, but Chip Ganassi Racing drivers Kyle Larson and Jamie McMurray, both of whom failed to make the cut this year, made it about them as both led laps. Larson was even in line for the win until a late caution shuffled things up a bit. McMurray also looked strong all day, and both drivers finished in the top 10, the only two non-Chase drivers to make that cut. The runs the CGR drivers put together reminded viewers that it’s not just about the title contenders.

What… does the championship picture look like with nine races to go?

Does anyone still think that Brad Keselowski is not the hands-on favorite to win? He’s been strong all summer long, and his win in Chicago serves notice that he’s in line to win a second title.

It’s interesting to note that if it were not for the Chase format, the talk could very well be about Jeff Gordon, not Jimmie Johnson, staring down his seventh Cup title. Gordon is very much in contention for his fifth championship after his runner-up finish, while Johnson struggled all day long, showing that perhaps his summer woes were a deeper issue than most people thought.

Aric Almirola took the biggest hit to his title hopes with his first engine failure ever at Richard Petty Motorsports. His 41st-place finish means that Almirola will almost certainly need to win at New Hampshire or Dover to advance to the next round.

Kyle Busch was looking for a weekend double after winning the Camping World truck Series race on Saturday night at Chicagoland Speedway. He was a contender, leading twice for a total of 46 laps before finishing seventh with a late race call to take tires under caution that helped his cause. It’s a big Chase kickoff for Busch, who has a history of floundering early and often in the postseason. If he’s going to contend for the title, he’s got to be hot right off the start.

Matt Kenseth came into the weekend looking to defend his win from a year ago. Winless in 2014, Kenseth has still outscored every other driver in points gathered on the 1.5-mile tracks on the strength of his trademark consistency. While Kenseth didn’t lead laps or threaten to win on Sunday, he did cart home a top-10 finish, coming home 10th, which leaves him 10th in points, 25 behind leader Keselowski.

The race itself was as clean as it gets and featured some good racing in the closing laps. However, it’s hard to say that a late caution didn’t change the complexion of the race. It looked as though there would be a first-time winner, who would take the spotlight away from the Chase for a little while, something that would be good for the sport at this juncture. The subsequent restart, however, allowed Keselowski to get past Larson, and once that happened, clean air did the rest, setting up a finish that didn’t live up to the Chase hype or to the racing fans were briefly treated to. The restart that resulted from the caution made for both the best racing of the day and a disappointing finish.

Why… did Keselowski win the race?

Remember that old adage that sometimes it’s better to be lucky than good? This week, Keselowski did have a good car but it was a late caution that let him grab the lead and the advantage of clean air that allowed him to run away with the race in the closing laps. Larson had the best car, but Keselowski had the combination of experience and a lucky break with the lap 246 caution. For Keselowski, the race serves as a warning that his team will be very, very difficult to beat for the title as long as Lady Luck sticks close by.

JTG Daugherty Racing; AJ Allmendinger (No. 47 Kingsford Chevy): Allmendinger was best in class again this week but didn’t fare so well in the Chase class. Allmendinger and Co. never did get up to speed this weekend, and his 22nd-place finish leaves him looking for a miracle to make the second round.

Germain Racing; Casey Mears (No. 13 GEICO Chevy): This team did improve throughout the race, with Mears giving steady, detailed feedback throughout. But a vibration and intermediate-track struggles kept the No. 13 bunch from the finish they were hoping for.

HScott Motorsports; Justin Allgaier (No. 51 Brandt Chevy): Allgier finished 27th, but that was a decent third in this group. While the number isn’t very pretty, the bigger picture is a little rosier as this team continues to grow.

Circle Sport; Travis Kvapil & Landon Cassill (No. 33 Little Joe’s Autos Chevy & No. 40 Snap Fitness Chevy): Cassill was impressive across the board this weekend, bringing his Cup team their best finish since Bristol with his 28th-place run. He’s also been quietly impressive in his underfunded Nationwide Series ride—he finished 16th on Saturday and is just 23 points out of the top 10 in that series. Kvapil was in the No. 33 this week, but a different driver didn’t provide a boost; Kvapil finished 38th, 11 laps down.

Tommy Baldwin Racing; Michael Annett & Reed Sorenson (No 7 TMC/Allstate Chevy & No. 36 Golden Corral Chevy): Sorenson led his team once again this week, though his 29th-place finish was probably a few spots lower than the No. 36 team was hoping for. Is there good news on the horizon for Sorenson’s team? Crew chief Todd Parrott’s post-race tweet suggests some sponsorship.

Proud of my @TBR_Racing #36 team ! Another finish in the 20's with ole Blackie ! Got Colors next week stay tuned ! pic.twitter.com/vChnPPNjvX

Annett’s team spent many laps trying to get the No. 7 up to speed after some issues, but in the end, they had to settle for 40th, more than 30 laps down.

BK Racing; Alex Bowman & Cole Whitt & Ryan Truex (No. 23 Dr. Pepper Toyota & No. 26 Iowa City Capital Partners Toyota & No. 83 Burger King Toyota): Whitt had the best finish for BK this week, but a fuel-pump problem kept the No. 26 from a better finish than 30th place. Bowman came home 35th after struggling with handling issues.  For Truex, the disappointment obvious in his post-race tweet tells the story of not just Chicago, but a season of frustration: “Broken wheel bearing. Add another DNF to my stats.” Truex finished 42nd.

Front Row Motorsports; David Ragan & David Gilliland (No. 34 Dockside Ford & No. 38 Love’s Travel Stops Ford): The weekend was a definite disappointment for this pair, who have shown marked improvement overall in 2014. Ragan led the way in 31st, with Gilliland in 34th.

Leavine Family Racing; Michael McDowell (No 95 Thrivent Financial Ford): In their first race since Bristol, the LFR bunch struggled to a 32nd-place finish, not their worst intermediate track finish, but not their best, either.

Phil Parsons Racing; Josh Wise (No. 98 Chevy): Wise finished 33rd in a car that was lacking in power all weekend. This team has made huge strides this year, and the finish wasn’t terrible, all things considered.

Jay Robinson Racing; Joe Nemechek (No. 66 Royal Teak Toyota): The team has had some internal turmoil recently, but they are still making it to the track each week, though how long they will continue to push on is anyone’s guess. Nemechek finished 36th this week.

GoFAS Racing; Joey Gase (No. 32 Zimmer Ford): Let’s be honest: Gase probably isn’t ready for the Cup Series after 69 Nationwide Series races in which he has never cracked the top 10. This team has had its own struggles, and together, they combined to finish 37th.

Jeff Gordon is easily the best of the HMS teams this season, and Johnson does appear to be off his game a bit, but with the crapshoot chase, Talledega can can eliminate a red-hot Gordon and send a mediocre Johnson on to the next round. Whether that’s good or bad depends on your point of view. My point of view is that it sucks.

I think the majority of the fans agree with your opinion of the Chase. Unfortunately the Chase chatter never lets up. When Larson and Gordon were battling it out for second all they talked about were the Chase implications.

JohnQ, believe me I don’t like the Chase or the never ending chatter either. However if it weren’t for that what would they be talking about? JJ’s spaghetti recipes? Hard to get people excited about driver x gaining .01 of a second.

Russ, That Gordon/Larson battle was the real thing for a few laps. The NASCAR Zombies are so Chase obsessed that they can’t tear themselves away from it and just enjoy top drivers at their very best. That is if they even recognize real racing anymore.

I agree with that assessment but Johnson did dominate at Dover and Charlotte which may give him a golden ticket through the first two chase rounds if he can repeat that performance.
And I agree that having a total crapshoot race (Talladega) in a crapshoot championship format really could wipe out someone that had an otherwise stellar season from the chase. Hence the reason that this new chase is such a crock.

Yeah, I wouldn’t count Johnson out yet, as much as I would like to do it. Being a Gordon fan, I enjoyed watching that action with him and Larson with both of them racing hard. It is a shame that as John Q stated the guys in the booth couldn’t just enjoy the action because they have to scream the word “chase”. It’s like a drinking game.

I worry a lot about the Dega crapshoot, too. I don’t think a RP race belongs in the chase – that’s why it always made me crazy when people want to talk about Daytona being the season ending race. No darn way!

BillB, I agree 100% with the new chase being a crock, joke or various other less polite words.

I think what will see is a premium on winning the Kansas and Charlotte races next month. That way, if you get taken out at Talladega, you still move on to the next round. A win may not mean as much in this first round, but in round two it may mean the difference between elimination and advancing to the next round. For that reason, it makes me feel good to see Keselowski doing so well at the intermediate tracks.