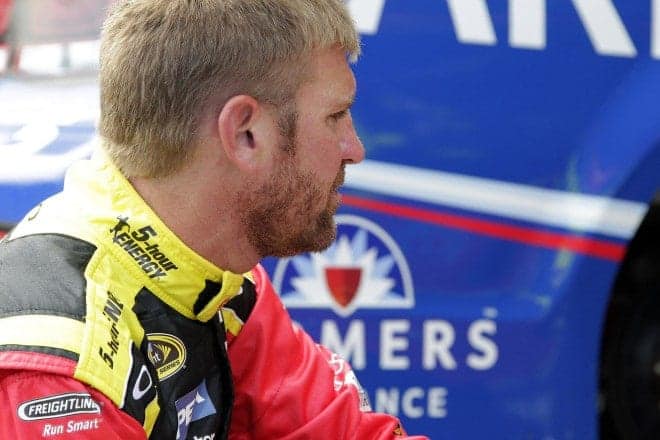 The Chase for the NASCAR Sprint Cup is a chance for 16 of the best drivers to start anew, but with only 10 races, divided into four segments, those drivers have very little time to make an impression and even less room for error before eliminations are made. It’s a fragile state that promises to keep the outlook of Who’s Hot and Who’s Not constantly changing for weeks to come.

For now, there remain similarities in this Hot or Not to the final regular-season editions. After the first race of the Chase at Chicagoland Speedway, championship ineligibles continued to rise and fall in stock at an increasingly gradual pace, while many Chasers remained true to form despite a much smaller sample size. Here’s where the championship hopefuls (and others) rank in preparation for the second race of the Challenger round (or round 28 for everyone else).

Hot or Not isn’t all about the Chasers. There are 27 other drivers out there after all, but sometimes its impossible not to rank one or more of the 16 title contenders highly just because of their statuses. After what Brad Keselowski did at Chicagoland, this is one of those times.

Keselowski ended up in the same place as last week: Victory Lane and atop the Hot or Not board. The No. 2 team took all of its momentum from Richmond International Raceway and applied it to the 1.5-mile scene and the result was very similar. No, Keselowski didn’t blow everyone away with astounding laps-led totals, but he did come away with an automatic bid for the Contender round, and that counts for much more than any single statistic.

Even though Keselowski isn’t the highest scoring driver in Cup lately, he leads the points and projects favorably for this week’s event at New Hampshire Motor Speedway, where he is the defending winner and has three top 5s over the last five races.

Speaking of drivers maintaining championship grade consistency, what about fellow Team Penske driver Joey Logano? Logano has been on a roll since Indianapolis, with seven top 6s over an eight-race span – the most in Cup.

Where Keselowski sets the precedent for Penske explosiveness, Logano holds his own as the organization’s Steady Eddy (and no, Sunday’s debris-induced blown engine during the final lap doesn’t count against him).

Outside of a runner-up performance from Jeff Gordon, Penske outperformed Hendrick Motorsports, which didn’t have a terrible afternoon by any means, and that’s very, very impressive.

Those three drivers are at the forefront of the Chase battle at this early stage, and there are several other promising Chase showings vying for a Hot or Not mention, but it’s very hard to ignore some of the non-Chasers, specifically Kyle Larson.

From the way Larson drove in the closing moments of the MyAFibStory.com 400, some might think that the No. 42 Chevrolet was piloted by a grizzled veteran, had it not been for the rookie stripe and name across the front windshield. Larson’s battles with Keselowski, Kevin Harvick, and then Gordon were extremely exciting, and also meaningful from a points perspective, but it wasn’t entirely unexpected. Larson has been showing the potential that caused Chip Ganassi to take a risk on the inexperienced 21-year-old driver for some time now. Over the past six races, Larson’s average finish of 13.5 ranks as that eighth best in Cup, and by placing third, he rose to 17th in the standings.

And what’s this, another auspicious matchup? Larson came home third in his July debut at New Hampshire. His continued improvement is just one half of a positive trend for Chip Ganassi Racing.

At Chicagoland, Jamie McMurray maintained the intensity that almost led to a win on more than one occasion leading up to the Chase. McMurray finished ninth despite a scare after the No. 1 Chevrolet brushed the wall and received minor cosmetic damage. His average finish over the same span as Larson’s 13.5 is slightly better (10.17), and his 101.9 average rating since Pocono ranks fourth in Cup.

Outside of CGR, non-Chase teams mostly ran behind Chasers, but that doesn’t necessarily mean that those Chasers impressed relative to their competition. Despite 12 Chasers’ abilities to finish in the top 15, things didn’t run very smoothly, and they’ll need to streamline things moving forward, or advancement won’t be easy without winning a race.

Problems were widespread, including pit road entry spins by Kurt Busch and Matt Kenseth, but it didn’t stop there. Other drivers and crews experienced problems that cannot continue if they hope to be in contention in South Florida.

Ryan Newman was penalized for pitting before pit road was open and speeding during entry on lap 99. He subsequently spent an expended period a lap off the pace before finishing 15th.

The least fortunate Chaser on pit road was Kasey Kahne, who was penalized on three occasions, twice during a lap-183 stop for speeding and for having too many crew members in contact with the pit service area.

In total, these Chase drivers were penalized seven times and rank no higher than ninth in the standings.

Greg Biffle wasn’t among those, but after finishing 23rd while battling poor handling, he ranks 15th in points, 38 points behind Keselowski. This is nothing new for a No. 16 team that has struggled to keep up with changing track conditions throughout the campaign.

Even with enough penalties to go around, that mistake-prone group of challengers didn’t completely bomb their 2014 Chase debuts. Unfortunately, Aric Almirola cannot say the same. Almirola’s race ended with a blown engine, just 37 laps before the checkered flag. The worst part is that the No. 43 was at its strongest when Almirola’s afternoon and possibly his chances of advancement went up in smoke.

Now, Almirola will likely need to be near-perfect to climb out of the 23-point hole between himself and Edwards, who holds onto 12th. The problem, discussed in last week’s Hot or Not, is that the No. 43 team is still behind most of the organizations its competing against in quality of equipment and postseason experience, and while Almirola’s race was headed towards a possible top 10, he hasn’t shown an ability to string such finishes together over the long term.

Almirola’s New Hampshire credentials don’t help either. In eight NHMS starts, he has just one top 5 and averages much worse (21.2), with no laps led in 2384 circuits. At least Almirola is in the Chase, though, right?

Clint Bowyer cannot say the same after failing to record a win and coming up short in the regular season finale. Bowyer followed that up with an accident and 39th at Chicagoland. Like Almirola, Bowyer appeared ready for a top 10 before losing a tire and making heavy contact with the wall.

Coming up oh-so-close has been a common theme for the No. 15 team for much of the season.

Much has been made of Team Penske qualifying. They are in the class of the field for sure. But due to rain they started 25th and 28th. They showed they can move and move they did. 1st and 4th..not bad. Now they got to keep it up..:)