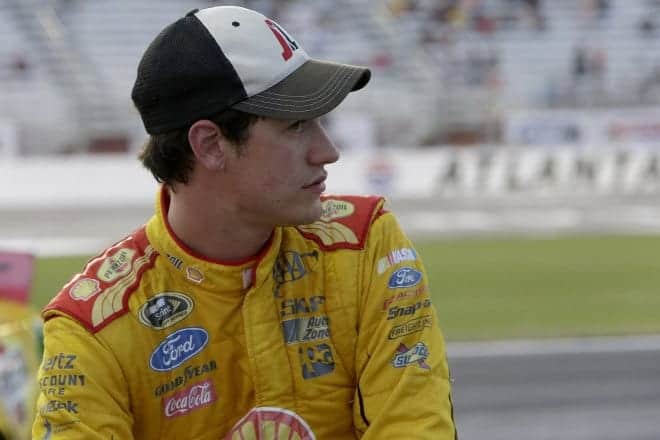 What a win that was for Brad Keselowski with a pass – if not quite for the ages, then certainly for highlight reels for 2014 — to take what ultimately proved to be a decisive lead albeit with one more restart at the MyAFibStory.com 400 at Chicagoland Speedway.

Keselowski, it should be noted, also won the first race of the Chase at Chicagoland in 2012, when he held off Jimmie Johnson to take what proved to be a critical win in his championship campaign. Of course, this year the situation is slightly different with the revised format, but make no mistake: this win was a marker and a sure sign that the wheelman of the Blue Deuce is a genuine title threat in 2014.

“I want to be thankful for today, but I know there’s a long ways to go,” said Keselowski in the post-race media conference. “Today was about as much of a statement as you can make on a week one with ten weeks to go. I don’t want to understate it but certainly don’t want to overstate it. It’s a hard balance.”

And a balance it is, thanks to that tricky little five-letter word: “reset.” Once we get past Dover, Keselowski’s win isn’t going to count for much more than his personal record and he’ll be back to square one in points.

But reset or otherwise, this win is a sign that Brad is primed for title two. The rest of the Chase field should watch out.

TWO: AND THEN THERE WERE 15

For intents and purposes, his firsr Chase is over before it had even began after engine failure last weekend. Yes, it’s true that he could win at either Loudon or Dover, or indeed finish very strongly and hope for catastrophic failures elsewhere, but reality would suggest he’s done. With his only win coming at the lottery that is the Daytona race this summer and only five other top-5 runs in 134 races (across seven years) it’s a tall order to expect either a trip to Victory Lane or two fantastic runs in the next two weeks. It’s not out of the question, of course, but it would certainly be surprising.

No one, let’s be fair, expected to see Almirola challenge for the 2014 title, but running sixth, when his engine expired, with just 37 laps to go the driver of the famous No. 43 was primed to start his Chase off in grand style. Taking to Twitter post race, Almirola noted:

“So proud of my team!” Almirola tweeted after the race. “We rose to the occasion today and proved we can compete in the chase. Heartbroken for sure but they knew we were there.”

And yes, he was indeed “there” but when the checkered flag flew he was already behind the wall – his Chase hopes consigned to the garbage can of fate.

On the other side of the blown engine spectrum was Joey Logano, my pre-Chase tip for the title. With six laps to go in the 267-lap race, a windshield tear off flew onto Logano’s front grille, starving the airflow to his radiator. Thankfully for Logano, his engine expired coming in the final corners of the last lap and the Team Penske driver was able to nurse his ailing vehicle to a very respectable fourth-place finish.

“We hit a piece of debris with about five to go. I say ‘piece,’ but it was huge,” Logano said after the race. “I think it was a tear-off, and we got really hot, but the car started handling really good when it was on there, and we got another spot because of it. We blew up going into turn 3 and just had a big smoke screen behind me, but I was able to get it across.”

In this very same race last year, Logano started on pole and led 32 laps before his engine blew on lap 175 essentially ending his Chase chances before they had even begun. This time around, Logano survived what could have been a massive blow to his title tilt – if not necessarily a death knell given how lightning fast he’s been.

So lady luck was on Logano’s side this time round. If he parlays this into a championship, he’ll have this moment to look back at with great gratitude.

Next up is race two of the Chase and the second trip of the year to New Hampshire Motor Speedway. This will be the 40th Cup race held at the 1.058-mile flat track in Loudon, N.H. – a record that goes back to 1993. Situated on a plot of some 1,200 acres, the track is the largest multi-use sports facility in the state.

NHMS has held two NASCAR races since 1996 and only two drivers have competed in every event: Jeff Gordon and Jeff Burton. The latter is not on the entry list for this Sunday, which will leave Gordon as the only driver to have attempted every Cup race held at the venue.

The scheduled race distance is just 300 laps (317.4 miles) so drivers will need to get up on the wheel early, especially if they don’t practice or qualify well. This will be a crucial race in the first segment of the Chase with some drivers having the ability to lock themselves in on points before we even get to Dover and the first of the three elimination races. In the first race of the season at NHMS, Brad Keselowski led seven times for 138 of the 305 laps of the race on the way to victory. But it was teammate Joey Logano who looked the strongest before an unfortunate tangle with Morgan Shepherd.

Expect both the Penske drivers to be racy with Keselowski looking for a third straight win. One other driver worth watching, especially after his fine showing at Chicagoland Speedway, is rookie Kyle Larson, who finished third on the last visit to NHMS.

FIVE: DANCING WITH THE STARS

The irrepressible showman Michael Waltrip made his debut on Dancing with the Stars last night. At the time of writing here on the West Coast the show hasn’t yet aired, but early reports on Twitter suggest that Waltrip did just fine.

Kyle Larson, for example, tweeted, “Man you’ve got some guts @mw55. I thought it was fun to watch,” while Samantha Busch, Kyle Busch’s wife, tweeted “Nice job @mw55. Best line “my onesie gave me a wedgie!”

Back in 2007, IndyCar star and 2014 season runner-up Helio Castroneves entered the competition and managed to win the whole shebang. What price Waltrip doing the same for the honor of NASCAR? One way or another, it should be mighty fun watching him strut his stuff this season. He’s always made good television.

Yes indeed, it was looking rosy last year for Jr. and Logano and the rain came and the engines blew. They lost their Chase chances before it really began. The Gods did seem kinder this go around.

Logano hasn’t had the best luck at Loudon, most recently the misquoted drama purported from Logano’s mouth (he did not say what they said he said), and Morgan Shepard arrogantly saying he did nothing wrong, while his radio and other drivers said different. Before the non competitive vanity run of Mr. Shepard at Loudon, (a mentally and physically demanding track), Logano was running second and was the only one that had anything for BK. Hopefully his luck is better and Morgan is playing golf somewhere far away from New Hampshire this weekend. I say it again, if old Morgan took out Jeff or Junior, the rants would have been different and Morgan would have needed a police escort out of the state.

Dancing With The Stars. Michael Waltrip. Sir, you really have your finger on the pulse of fan interest. Could you find out Danica’s favorite color for us?

lol..Never saw the show..looks to cheesy and stupid for words. But I am sure it is a perfect fit for this hamy guy.