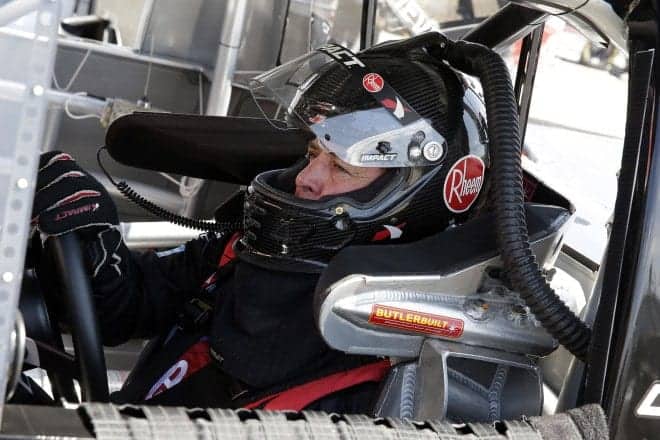 Ron Hornaday will drive the No. 9 Chevrolet Silverado for NTS Motorsports on September 27th at Las Vegas Motor Speedway and October 31st at Texas Motor Speedway with sponsorship from Rheem Manufacturing Company. This will be the first race back for Hornaday since the August 21st race at Bristol following a rift between Turner Scott Motorsports team co-owners Harry Scott and Steve Turner. The ensuing legal battle and dissolving business relationship left Hornaday without a ride the following week and every week after until now.

“At this late stage of the season, Rheem is fortunate to have found a quality organization like NTS Motorsports that was able to arrange for the caliber of race trucks and personnel that Ron Hornaday deserves and that gives him a solid chance to visit Victory Lane this season,” Ed Raniszeski, managing director, Rheem Motorsports, said. “Everyone involved in this effort is looking forward to getting Ron back where he belongs.”

Hornaday ran the 2013 schedule for NTS Motorsports before moving to Turner Scott Motorsports in 2014.

“NTS Motorsports has had a long standing relationship with Ron Hornaday” Bob Newberry, owner of NTS Motorsports, said. “Hornaday is a proven four-time champion and I’m glad we have the opportunity to work with him again.”

Sitting third in points as of the race at Canadian Tire Motorsports Park, Hornaday was notified that his team would be shut down at TSM due to lack of sponsorship and the feud between Turner and Scott. Rheem Motorsports stated last week that Hornaday did have sponsorship from their company and that they were working with Hornaday to find him a ride for the rest of the season.

Hornaday is a four-time series champion, currently sitting ninth in points despite missing two races, and has five top-fives and 10 top 10s in the 13 races run this year.