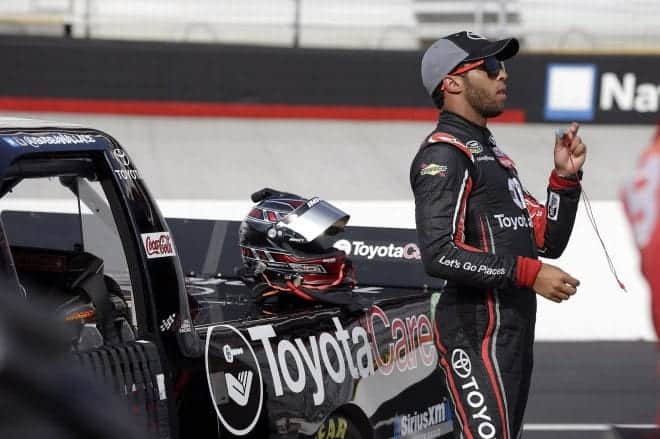 As a group announcement, NASCAR, Front Row Motorsports, Kyle Busch Motorsports and Martinsville Speedway announced on Tuesday Sept 16 they will honor Wendell Scott, the first African-American driver to win a NASCAR premier series event, with a series of tributes during the Martinsville race weekend from Oct. 24-26.

Front Row Motorsports will feature a full throwback paint scheme on their No. 34 Ford Fusion driven by David Ragan. The paint scheme will be close to the blue No. 34 that Scott drove to victory lane for his first career victory at Jacksonville Speedway on Dec. 1, 1963.

“It’s going to be cool to honor Wendell Scott at his home track with his family,” Ragan said. “I got to drive a tribute scheme for Ned Jarrett a while back, and it’s a tribute to the history of our sport that I get to honor Mr. Scott as an inductee, the last driver to win in the No. 34 before I did. I’m a fan of our sport’s history and have a real appreciation for it, so it’s special to be able to bring that paint scheme back for a weekend.”

Kyle Busch Motorsports will change the number on Darrell Wallace Jr.’s truck from 54 to 34 in honor of Scott. Wallace became the first African-American to win a NASCAR national series race since Scott’s victory in ’63 when he won at Martinsville Speedway last year.

“It’s an honor to run the No. 34 Toyota Tundra at Martinsville,” Wallace said. “I got my first win at Martinsville and the historical significance of that win and to be so close to Wendell Scott’s hometown was a really cool bonus to getting my first win. The Scott family has followed my career since I ran the NASCAR Drive for Diversity program for Rev Racing and I’ve kept a relationship with the family over the years. Thanks to Joe Gibbs Racing, Kyle Busch Motorsports, Toyota and NASCAR for allowing me to run the No. 34 at Martinsville. I’m pumped to get back there and hope to get another victory.”

Martinsville Speedway also announced that members of the Scott family will be on hand during the race weekend and offer special Q&A opportunities for fans on-site.

“Wendell Scott faced numerous adversities throughout his racing career. At the end of the day though, he persevered and overcame all odds,” Clay Campbell, president of Martinsville Speedway, said. “That perseverance serves as an inspiration today and as a testament to that, he was inducted to the NASCAR Hall of Fame.”

A 2015 NASCAR Hall of Fame Inductee, Scott was the 1959 NASCAR Virginia Sportsman champion and won over 100 races at local tracks prior to starting his NASCAR premier series career. The World War II veteran made 495 starts, scoring 20 top 5s and 147 top-10s. He passed away in 1990, at the age of 69.