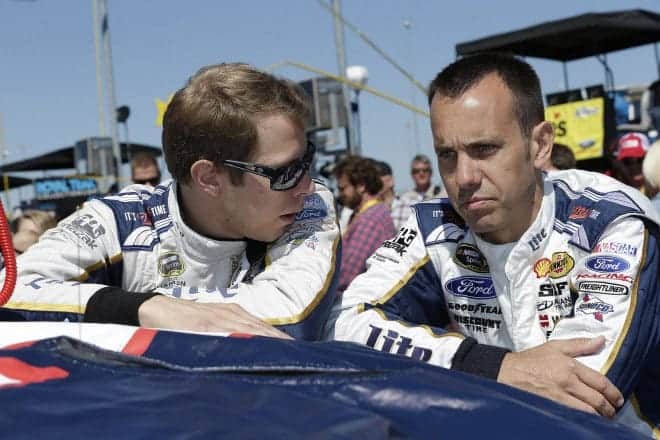 We could see some familiar faces back up front at New Hampshire. The end of last Sunday’s race at Chicagoland saw Brad Keselowski and Kyle Larson running up front for much of the event, with Keselowski winning and guaranteeing himself one of 12 spots in the next round of the Chase. Rookie Larson, through hard racing with Kevin Harvick, then Jeff Gordon kept trying for his first Sprint Cup win before ultimately coming up short.

And while there are no guarantees in NASCAR, recent history tells us they’re set to contend again. Keselowski, with two straight wins victories overall will be looking to become the first driver to win three in a row since 2007, when Jimmie Johnson won four straight. Larson, meanwhile is looking to become the first rookie winner since Joey Logano won a rain-shortened race at – you guessed it – New Hampshire back in 2009.

The key for Keselowski and his team is not just that they are winning (they have five this year) but how they handle adversity. When Keselowski’s crew chief Paul Wolfe feared that a lug nut might be loose and called his driver back in under a yellow flag Sunday, there was no panic by the driver or the team, just resilience. Their calm under fire is the product of experience, knowing they’re able to recover from any mistake.

Larson, too, is gaining in the confidence area. He’s returning to some of these tracks for a second time now, so he’s got some idea what to expect and how they drive. As I’ve said before, it’s not just a matter of if Larson is going to win this year, it’s a matter of when. It could very well happen this week, and if you’ve got them on your roster, now would be a great time to take them off the bench.

Along with when Larson might win his first Sprint Cup race, another thought many NASCAR fans are having is if or when Matt Kenseth will visit victory lane. After seven victories last year and finishing as a runner-up in the Chase, Kenseth, while having been consistent throughout the year, has gone winless. A realistic place to break the drought? None other than New Hampshire. Kenseth was fourth in the first race there this year and does have a win and another top-10 finish in his last five starts at the track. Kenseth has led 152 laps in those races, fourth most among active drivers, and has to be thinking Sunday may his time to perform.

Kyle Busch hasn’t won in the last five trips to New Hampshire, but he did finish second in the July race there and he does have one career victory there. One good sign that he could very well contend again this week is that he has led 235 laps in those five races and has three top five finishes there. He got off to a respectable start in the Chase with a seventh-place finish last week, but a win would give Busch and his team some real confidence heading into the next round and also quiet questions about Busch’s and crew chief Dave Rogers’ working relationship.

A driver who did not get off to a good start in the Chase and may well need a win to get to the next round is Kasey Kahne. He finished 13th in Chicagoland and has just a five-point cushion on Ryan Newman for that coveted 12th spot. He does, however, have one win in his last five trips to New Hampshire and was 11th in the July race. Kahne also has another top 10 finish in the last five races at New Hampshire and his average starting spot is 5.6, so he could get that all important track position early in the race. He may be in a spot where every little advantage he can get will make a difference.

One of the non-Chasers that has to be looked at this week is Clint Bowyer. He has two career wins at New Hampshire and seven top 10 finishes in 17 races there. Three of those top 10s have come in the last five races at New Hampshire, where Bowyer has an average finish of 8.6, fourth best among active drivers.

Since he didn’t make the Chase last year, Brad Keselowski falls in this category, but he is clearly one of the, if not the, aces this year. And the chances for him to win that third straight race are quite realistic, not just because he’s on a roll right now, but because his recent history at New Hampshire is pretty good too. You don’t have to go too far back to find his last win there. That was just over two months ago when took the July race. And that win was certainly no fluke. In his last five races there has three top fives, another top 10 and his worst finish has been 11th. Also, in July, he led 138 of the 305 laps in that race, so no luck involved there.

Another Chaser glad to see New Hampshire is Denny Hamlin. He was concerned that his engine was ready to blow up in the middle of Sunday’s race, then messed around and get himself a sixth-place finish. He could finish even better at New Hampshire as he has one win and three top 10 finishes in the last five races there. Hamlin has also led 363 laps in those five races, which is best among active drivers. He was eighth in the July race at New Hampshire this year.

One non-Chaser to look at this week is Brian Vickers, who also has a win in his last five trips to New Hampshire. Vickers has three top 10 finishes in his last five races there as well. But one bit of warning for him is that he finished just 21st there in the July race this year.

One Chaser who has not had a great recent history at New Hampshire, but shouldn’t be forgotten about is Joey Logano. He finished 40th in the July race because of an accident, but he had led three laps in the race and qualified sixth. So that finish really didn’t have a lot to do with him not having a fast car. Logano does have four top-10 finishes in his 12 races there, so it really wouldn’t be a surprise to see him finish near or at the front in this one, especially considering the year that he and teammate Keselowski are having.

When it comes to looking at the C list in the Yahoo! Leagues you realize this will be the only year that Kyle Larson is there. So, whatever your situation, if you are on pick limits, on a budget, or however your league might work, find a way to use Larson this week. The rookie finished third in the first New Hampshire race, so with a bit of experience now, he could be even better this week. Also, remember that Larson did lead 14 laps in the July race, so he’s been up front there and has to feel good about his chances after last week’s third-place finish.

For most of the year, a good second option in this spot has been fellow rookie Austin Dillon and he did finish 14th in the July race at New Hampshire. However, in the last three races Dillon’s best finish has been 16th, so there’s no guarantee of a top 20 finish here.
One potential option here now is Danica Patrick, who has finished in the top 20 in three straight races and might have done better than her 19th Sunday had she not collided with boyfriend Ricky Stenhouse Jr. late in the race. Patrick finished on the lead lap in 22nd in the July New Hampshire race.

One other new name on the entry list this week is Corey Lajoie, who has shown some promise in the Trucks and Nationwide series. However, since he is in his first Sprint Cup race, he’ll basically just be looking to get some laps in and stay out of trouble and get a feel for what it’s like to run in Sprint Cup. There are rumors he is one of the drivers who could replace Marcos Ambrose at Richard Petty Motorsports next year, so he might be wanting to help his chances of doing that by running a clean race.

The leader in the Frontstretch Fantasy League on Yahoo! remains NoBarNASCAR, but it’s a tight race with nine to go. NoBarNASCAR has 7,334 points, Mojothemonkey has 7,321 and LeftTurnOnly has 7,287, so it’s a three way race for the top. The big mover of the week was Tom’s Crew moving up seven spots into fifth place overall with 7,067 points.

The top scorer this week was Tom’s Crew and Shadows PT each with 378 points, but slightly different lineups. Tom’s Crew had race winner Brad Keselowski, third-place Kyle Larson, fifth-place Kevin Harvick and sixth-place Denny Hamlin. Shadows PT had Keselowski, second-place Jeff Gordon, Larson and fourth-place Joey Logano. The reason for the tie with different lineups is because Harvick had 20 lap points for leading the most laps in the race.