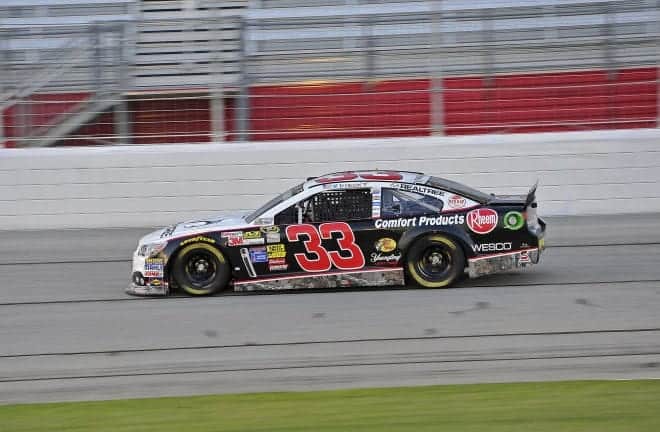 For the fourth week in a row, there’s a new face on the entry list in the NASCAR Sprint Cup Series.

First there was Ty Dillon, younger brother of Austin, grandson of Richard Childress and competitor in the Nationwide Series, whose debut had been anticipated for months – if not years – at Atlanta Motor Speedway. Then there was Clay Rogers, a veteran of the country’s short tracks who attempted his debut with Beard Racing, a startup in the series itself. (The team, No. 75 failed to qualify at Richmond International Raceway). Joey Gase then followed suit at Chicagoland Speedway, jumping up in the sport for a one-off with FAS Lane Racing in the midst of his first full-time NASCAR season with Jimmy Means’ Nationwide team.

Those looking for a continued stream of new blood in the series have certainly had their fill over the last three weeks, but the overall results may not be as encouraging unless one’s of the camp that just making it onto the track and finishing the race is an accomplishment – and, to be fair, that’s not off base. But for anyone looking for instant gratification, the previous three weeks have been fairly middling. Rogers’ DNQ is flanked by an average finish of 31st from the other two rookies. Dillon was the best, managing a 25th, two laps down. Gase, meanwhile, finishing 37th last week, 10 laps off the pace.

And now, in comes Corey LaJoie. The son of former Nationwide (then Busch) champ Randy LaJoie looks to make his first start in the Cup Series on Sunday with Randy Humphrey Racing’s part-time No. 77 – and looks to be locked in, given the 43-car field as of Wednesday night.

It’s exciting to see yet another new driver out for the fourth week in a row (not to mention the sprinkles on top in Mike Wallace‘s apparent return to make what would be his first series start since 2009), but the luster may be wearing off for some. There are new faces coming in, but are they contributing? Will they contribute at all? Should we care?

That question might actually be most prevalent with LaJoie. Where Gase was at least a fairly frequent competitor at many of the tracks, having 69 starts to his name in the Nationwide Series, LaJoie has two. Yep, two starts total – and all this since becoming a development driver for Richard Petty Motorsports.

But LaJoie – other than the obvious name link – has something going for him. He has some results backing him, a top 10 in the Truck Series this season, a five-win year in the K&N Pro Series East in 2012 and a three-wins-in-five-races statline in the ARCA Racing Series among them. A thumbs up from a team owned by the King of NASCAR isn’t so bad, either.

There’s also the other important side to consider: whether it’s someone with a boatload of honors coming in or not, Gase, Dillon and others aren’t alone in having middling to disappointing first races. LaJoie, similarly, should not be discouraged if the same happens to him.

In 2014 alone, eight drivers have made their Sprint Cup Series debut. Some of these – Dillon and Ryan Blaney among them – are considered the cream of the crop, young guns who will be the future of the sport and one day contend for championships. Average finish among them in their first race is 29th. The best finish is 22nd, scored by Brett Moffitt at Dover earlier in the season.

How about 2013? That season, 12 drivers took to the track for their first series start at some point in the year, some of whom are full-timers on the circuit now. Average of 33.1, best by Parker Kligerman, who earned a ride this year as a rookie but fell flat after Swan Racing folded. That season saw the first look at 2014 rookie phenom Kyle Larson. His first start found him 37th.

The 16 in the Chase this year have debuts in the Sprint Cup Series ranging from 1992 to 2008. Average finish? 27.1. That includes two top 10s – a sixth from Matt Kenseth and Carl Edwards‘ 10th – plus five finishes of 40th or worse, something not even any of the debuting drivers this year have done (those distinctions go to AJ Allmendinger, Aric Almirola, Ryan Newman, Kyle Busch and Kasey Kahne, by the way). A good chunk of the rest are still in the 30s range.

That should certainly be heartening for the crop of youngsters who made it out for the first time this year, plus those that will, like LaJoie and, potentially, Rogers. We’re actually quite lucky to have had such a sudden stream of new talent come into a series that’s historically known for being a bit exclusive compared to the overall standings lists of the Nationwide and Camping World Truck series.

Bearing that in mind, watching drivers like LaJoie jump on in should provide an added bonus to any of the next few races, perhaps becoming a respite for those of you disillusioned with the Chase and what it means for NASCAR.

Instead, keep an eye on the drivers who may one day be in the Chase!

I find it interesting that these guys are skipping farm series pretty much and going to the show. Do I think CL is ready, hell no, do I want him to stay out of the way of “The Chasers” hell yes!. And at a demanding track like Loudon no less, good grief. It never did make sense to have a non playoff team on the same field with a playoff team. Morgan S. got sympathy for taking out a contender (running second) and the competitive guy was the bad guy at Loudons last race. I can only imagine and would serve Nascar right if a Corey or a Morgan or who ever took out a “Chaser” mainly the HMS crew…Look out!!!!. What sport allows in essence a eliminated team to compete with the competitors??? How stupid and detrimental is that, based on what is on the line?????????

Michael in SoCal
Reply to  kb

Does the name John Wes Townley ring a bell? Moved into the Cup series WAY TOO SOON, floundered significantly. Moved back to the Nationwide & Truck series and has been doing a decent job keeping his cars & trucks in one piece, making progress.

I’m at a loss Kb as I try to make sense out of your post. Is it your opinion that non-chasers shouldn’t be on the track with the drivers that are in the chase or just drivers that you feel aren’t competitive? If your point is that a play-off system is unsuitable for auto racing then I agree. If, however it’s your opinion that non-play-off drivers, (the other 37 cars), should stay clear of drivers in the chase then I don’t agree. It’s racing and if the drivers are good enough to get into the Chase, (in whatever silly format it’s in), then they should be good enough to work themselves around traffic.

I do agree with the point that drivers are moved up way too early. A few Nationwide/Truck starts is a bit too soon to be considered a top-tier driver in my opinion. That being said if a team owner sticks one of these guys in a Cup ride then the Chasers have to work around that obstacle as well. It might help if NASCAR Cup races attracted more than 43-44 teams to each race as some of these up-and-coming guys might not even make the race, (like what allowed the Morgan Shepard situation to occur).

Chris in a small nutshell, I do not believe that any team/driver NOT in “The Chase” should be competing with playoff teams, what sport does that? None. You make the playoff’s you play against other playoff teams. As for drivers experienced drivers maneuvering around, that’s not what I am worried about, it the very inexperienced getting into them during the playoff round that is a concern. Classic example Morgan S. struggling mightily with a race car and was clearly over his head, he took out the second place car. How is that remotely justified or acceptable if that was a playoff race and he took out a “Chaser”? They are not equal, and should not be on the track with them. But it is what is, nothing we can do about it..lord knows fans have tried.

So in a smaller nutshell there should only be 16 cars on the track? You can’t separate what you consider inexperienced from experienced drivers when talking about non-chasers. As history has shown even experienced non-chase drivers can adversely impact chase drivers. Prior to the Chase, drivers that were far down in the points could, and did adversely impact drivers so I’m not sure what the difference is now.

What would be the criteria by which the sanctioning body would determine that a driver to be considered experienced? Currently the only way to do that is through qualifying as inexperienced drivers would most likely fall to the bottom of the time sheets thereby not making the race. Unfortunately, at this time NASCAR is having trouble getting more than 43 cars to qualify thereby everyone gets in, (as long as they make the minimum speed).

Using your classic example of Morgan S. he would’ve never been in that race had there been more than 43-44 cars attempting to qualify. Unfortunately though this was the case so he had every right to be on that track as much as the other 42 drivers per NASCAR. What happened to Joey could’ve, (and might), happen to any of the other Chase driver in the next nine races.

As I stated before, in my opinion a play-off system does not work in racing. It works great for two team sports playing at once…not so much for 43 teams playing at once.

No I am saying..NO CHASE..let them ALL race till Homestead. I am pointing out the stupidity and flaws of the current system.

Ah, ok Kb, thanks for clearing that up. Unfortunately I’m afraid we’re stuck with it until NASCAR totally ruins the sport. My guess is next year the Championship will be determined by the Chase drivers playing X-box NASCAR 360. (I couldn’t reply to your post so I am posting under mine).

A person can get lost in the “farm” system. Networking is the key. And if I’m a young buck I only want to be in a Hendrick Chevy. Brad K. is still pissed but its given him the will to win.

Too often these young talents take any ride in inferior equipment to get to the big show and get labeled journeyman forever. They will learn more running up front in Nationwide or trucks than 3 laps down in cup. Of course it’s different for those tagged for top rides like Larson, Dillon, and Chase Elliot.

JohnQ
Reply to  Bob from Jersey

Better he runs the NW series knowing that he will at best finish sixth every week behind the five Cup drivers entered to assure that no actual racing takes place? Or, maybe entering the truck series and getting lapped twice within the first twenty laps by a Cup driver with a personality disorder? Knowing before the green flag drops that one has no chance to win can develop nothing other than to become comfortable with losing. Nascar’s handling of the feeder series actually hinders driver confidence. There is a reason that baseball doesn’t have major league pitchers dropping down to pound developing players every night.