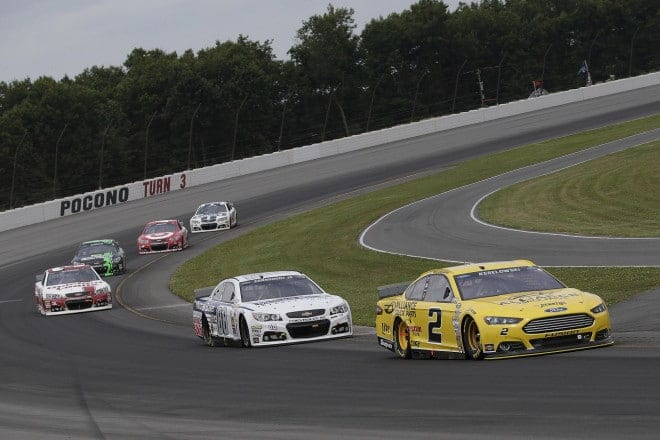 Was that an actual race at Chicagoland?  A track not known for well, anything, seemed to produce a finish that was worth remembering.  Brad Keselowski’s ballsy move, splitting Kevin Harvick and Kyle Larson as they raced for the lead, seemed to be just the type of thing that wasn’t supposed to be possible with the Gen-6 aero-dependent cars.

Now, it should be mentioned that a caution flag set up that fun-to-watch finish, otherwise we might be looking at another one of those ho-hum 1.5-mile track endings.  For a change, however, everyone wasn’t subjected to what seems to be a common occurrence in NASCAR races anymore: The caution flag waves for debris.

At some point someone needs to sit down and tally the number of caution flags there have been for debris this year.  That is not to discover whether the trend is up or down for this year but rather to find out how many times the racing seems interrupted by what many see as blatant attempts to manipulate the outcomes of the events.

This time, there would be no such issue.  Aric Almirola’s expiring engine gave officials all they needed to bunch the field up and to allow everyone to go for broke.  Bad for the driver of the famous No. 43, but good for everyone watching the race.

If Keselowski’s move wasn’t enough, the battle behind him for second may have been the real event, with age and experience battling youthful gumption and desire, as Jeff Gordon looked to steal the spot from Kyle Larson.  If Gordon’s inaugural Cup race at Atlanta in 1909 (look it up, it’s true) sits as a proverbial passing of the torch to a new generation, the finish at Chicagoland seems to have a familiar sense to it.

Or maybe not.  It’s hard to figure out these kinds of things without the benefit of hindsight, and nothing’s in the rear view mirror yet.  But it was good to be entertained by the on-track product after wheez-outs at Richmond and Bristol.

Happiness Is…Relationships.  Boy meets girl, girl meets boy.  They get twinkles in their eyes.  They hold hands.  They date.  They eat plate lunches in the vacant stands during Nationwide races.  They post pics on Instagram and Twitter.  It’s a story as old as time, with Ricky Stenhouse, Jr. and Danica Patrick playing their respective parts in the narrative.  The big difference between a story like their’s and many other relationships is that they have the opportunity to compete against each other – on a nearly weekly basis.

Think about that, because it’s kind of an odd situation.  That fact makes it all the more interesting when, ya know, maybe Stenhouse accidentally takes Patrick out of a race (with Chicagoland not being first time).  Oops.  Now that’s something most of us won’t face as a topic during dinnertime discussions.

One side of the duo, Stenhouse, offered a comical look into the aftermath by posting his text messages with other drivers, found here.  (Or maybe FOX Sports pulled a little fake job on us). Sure, this couple gets a lot of attention for, well, being a couple in NASCAR, and the attention may seem unwarranted for two drivers who haven’t produced much in the way of stellar results (though they both beat Stenhouse’s Roush teammates). But hey, they at least give us something to laugh about every once in awhile…

Happiness Is…Relationships, pt. II.  Mike Hoag, Dale Earnhardt, Jr.’s road manager stepped down on Tuesday.  As someone who does not even know what the role of road manager is, it doesn’t quite seem like news – other than the fact that Earnhardt was involved, which makes everything newsworthy.  But then there was the barb that Hoag sent towards Keselowski and the fact that the No. 2 team may have helped out their driver’s car by bending the side skirt.

This aspect of the whole incident needed more investigation but alas, Keselowski’s car went back to Concord, NC to go through the post-race inspection process.  Does that allow NASCAR to hide any possible evidence of a race-winning car having been manipulated?  Sure does.  Is Hoag, however, right?  Who knows.  That Hoag no longer works with Earnhardt seems to imply that a battle with Keselowski about issues like this one are something that is best left to be avoided.  But something to keep an eye on is how these two drivers race each other as the Chase progresses.

Happiness Is…Singapore.  Sure, you get caned for spitting your gum on the sidewalk in Singapore, but that doesn’t mean it’s all bad.  This weekend it will be the site of round sixteen of the Formula One season.  The feud between teammates Nico Rosberg and Lewis Hamilton continues to be one of the main storylines – as it should be while they’re sitting one-two in the standings.  This race isn’t one to point at as an indication of who will win the championship, as there are five races after, but it should do a fantastic job of showing how these two will race each other as the tension becomes greater.

Happiness Is…Kentucky.  NASCAR and scheduling is like whipped cream and grass clippings, not a good combination.  For a change, however, they figured out a way to fix one of their other issues that they also don’t know how to address: Cup drivers in Nationwide.  Thanks to the quirky schedule of having the Trucks race during the day at New Hampshire with the Nationwide race later that evening in Kentucky, it should be difficult for Cup drivers (who will likely steal a couple spots in the Trucks) to make their way down South.  Or maybe that’s just wishful thinking, as there’s still likely to be a few drivers who feel the need to jet down and take some lunch money.  Hope springs eternal or something like that.

I know Gordon has been in the Cup series for a long time, but I”m pretty sure his first race was not in 1909.

I don’t know all the facts but it seems fishy that shortly after the Kes accusation, he said he was leaving Jr. Did Jr. let him go as a result of the comment? Or just a timing coincidence?

There’s something I can’t understand for the life of me. Kentucky now hosts a Cup race. What sense does it make to have a standalone Nationwide race at the track now that it has a major league date earlier in the season? They’ve done the same thing with Chicagoland and I think the attendance has numbered 5,000 or so….for the three years combined.
Is it too much to schedule a NW race at South Boston or Myrtle Beach or some other track cast off by NASCAR in the last 15 years, where maybe the NW race would treated as a bigger deal.

Join me in contacting TMZ (and other similar organizations) to persuade them to investigate Nascar. Yellow flags, inspections, etc. This has been going on for years and no one in the nascar media will get the story. It may seem silly but I don’t know of any other way. But if it will free us of Brian France then its worth a shot.

It wasn’t Ricky who took Danica out. It was Danica who put Ricky into the wall. She came up on Tony and her spotter apparently told her to move up. Unfortunately, Ricky was there, and she forced him into the wall. Oops!

I was surprized with Gordon running second at the end that NASCAR didn’t through a phoney caution, hoping he could get passed Keselowski. Wonder if The Felon had a word with Brian that night.