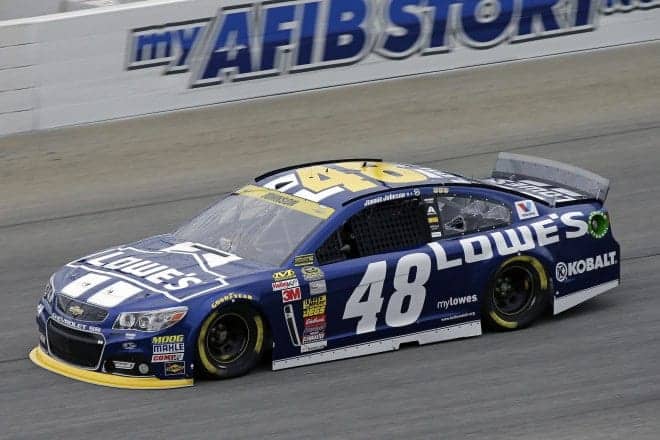 How many times have we seen it? – Jimmie Johnson and the No. 48 team come off a brutal summer stretch of races and struggles into the opening race of the Chase for Sprint Cup.

More often than not. And despite that, how many of those times has Johnson, crew chief Chad Knaus and the No. 48 team put it together over the last 10 races to win the championship? Six out of the last 10 seasons.

However, this year feels different.

It seems as if the field may finally be one step ahead of Johnson, who is attempting what would be a record-tying seventh points championship, tying Dale Earnhardt Jr. and Richard Petty with the most Sprint Cup Series championships ever achieved by one driver.

Why is that? It stems partly from his performance this year and partly from the brave new world that is the 2014 Chase format.

Check out his performance on 1.5-mile speedways in 2014. Johnson has the most career wins on this type of track in NASCAR history, but Johnson hasn’t quite shown that strength this season. His win at the Coca-Cola 600 at Charlotte Motor Speedway last May is his only win on such a track in 2014. What is even more unusual is Johnson has only two top-5 finishes on 1.5-mile speedways this season – his win at Charlotte and a fourth-place finish at Atlanta Motor Speedway.

Instead, Johnson started the 2014 chase off at Chicago with a 12th-place finish, which by his standards is like finishing outside the top 20. While Johnson has an average finish of 9.5 on intermediate tracks this season, he has also lacked speed in comparison to Hendrick Motorsports teammate Jeff Gordon in addition to Kevin Harvick and Brad Keselowski, who are three of his main championship rivals this season. While Johnson is expected to easily get out of the first round of the Chase, his quest for seven will be dictated by his success at Kansas Speedway and Charlotte, which kick off round two. He must rely on the tracks that have been his wheelhouse to get the job done.

Because then there’s Talladega. While Johnson has two wins at the 2.66-mile oval, including one of the closest margins of victory in NASCAR history in 2011, his track record is anything but sterling. In 25 career starts, he has 10 top-10 finishes and seven finishes of 30th or worse. However, if there is a bright spot for Johnson at Talladega, it’s that he has five top-10 finishes in the last seven Chase races at the track. Chances are he would much rather be locked in the next round before he reaches Talladega than having to win there to stay alive – something that can probably be said for everyone involved.

Additionally, I know it’s hard to consider Knaus as a reason for vulnerability; however, he has been this season. The communication between Johnson and Knaus isn’t the usual crisp communication we have come to expect from one of the most successful driver/crew chief combinations in NASCAR history.  Whether they have been testing new setups leading up to the Chase or wires getting crossed mid-race, the lack of speed has had much of the NASCAR fan base scratching their heads. For Johnson and Knaus to make it to Homestead as part of the championship conversation, they have to get back to what got them to this point and what made them six-time champions.

If he does make it to the final round, the last piece of the puzzle is Homestead-Miami Speedway – and things aren’t going to be the way they used to be. Other than 2010, Johnson has had the luxury of going in with a fairly comfortable points leads, affording him the opportunity just to ride around and finish solid to lock up the championship. That luxury will be nonexistent this year as NASCAR’s new Chase format put a winner-take-all scenario into play at Homestead. The problem for Johnson is that, despite his success there stemming from his championship wins, he has never won at Homestead. In 13 career starts, Johnson’s best finish at Homestead is second, on two occasions.

This year, second may not be good enough. If Johnson is part of the final four at Homestead, the mind set for him and Knaus will go from protecting a lead to winning the race and championship – something they have never experienced.

Is Jimmie Johnson vulnerable in 2014? Yes.

But even then, should you bet against him? Well, he’s certainly been in a behind-the-curve position before heading into the Chase, and we saw how that turned out.

Oh, give me a break! There is nothing wrong with the 48 team. Nothing! Their “brutal summer? Don’t be suckered in! Since JimmieChad figured out the Chase joke, they have been playing everyone. They position themselves, and when they are safely in, well ahead of everyone else, they do a little experimenting, although, everyone else gets conned into believing they, the almighty JimmieChad, are in a slump. Then, come joke time, I mean Chase time, they suddenly overcome that “adversity”, and have overcome their slump. Bovine fecal matter! Now, NASCAR has come up with this new format that makes this year’s chase a bigger joke. Oh gee, Jimmie didn’t do well at Chicagoland. He “only’ finished 12th, and five Chasers finished behind him. All JimmieChad has to do is keep running in the top 10-to12 at New Hampshire and Dover. But, come round 2, and watch as suddenly, the 48 team suddenly comes back to life. Jimmie and Chad are playing mind games with everyone, including the media. That is their specialty. As I said, there is nothing wrong with the 48 team. They do not have to do, or show, anything in the first three races. They are conning everyone. I only hope Kez and Joey aren’t being suckered in and can ultimately defeat them. That will be fun to watch JimmieChad’s plan finally blowing up in their faces. Unfortunately, I don’t see it happening. Give him number 7 (unfortunately) now.

Chad Knaus is indeed the smartest man in racing. And yes, I mean all racing, not just the manufactured world of Na$car. Once the 48 had two wins under it’s belt, there was absolutely no reason whatsoever to treat the rest of the “regular” season as anything but a prolonged test session to tune up for the ridiculous “chase”. With the points reset again at the final race, the initial seeding in the chase did not even matter as in previous chase seasons where a few points in the initial seeding could make a difference at the end. At least two wins and in the top 30 and they were guaranteed in. They could blow up or crash half the remaining regular races and be in, so why not just test? Then the first cut after 3 races is a no brainer as well, all they need to do here is not crash out to stay ahead of 4 other drivers to make the top 12 and advance another round. Maybe not a test session any longer, but no reason to bring out whatever trick(s) Chad has up his sleeve for this year. You can expect them to suddenly “find” some speed after the cut. Maybe not even until after the next cut to 8 drivers, depending who else is still in. For example if a few big guns like Kevin or Jeff have some bad luck and miss the cut, that leaves a few more fish in the field to make the next cut easier to make.

And then there is Talladega. Waiting for the “big one” to take out a few contenders. If I were in a position to give advice to Mr. Hendrick on Talladega, it would be this: Go back to the old days of qualifying and put in those grenade motors that make an extra 20 horsepower but only last about long enough for qualifying and make sure all 4 cars get the top 4 spots and get the best pit stalls. Change all 4 engines to the race setup, and change everything else on the car you feel like and take the penalty of starting all 4 cars at the back of the field. This makes it safer for the next phase, as they won’t have to drop back through the rest of the field to get to the back, and then run a half lap behind the lead pack in a nice safe pack of their own of 4 top cars that can easily pace the lead pack and not get lapped. Ride happily there for the next 3 hours sipping the sponsored beverage of your choice, and then put the hammer down after the inevitable “debris caution” with about 20 to go. Drive easily though what is left of the field, all the other cars being crashed out, damaged, taped back together and used up by that point and race amongst the four Hendrick cars for the last 5 laps and the win. I’ve seen a minor version of that strategy attempted a few times, but they invariably get impatient about the halfway point and “go” too soon and end up in the big one anyway.

I am not a Jimmy fan, but definitely a Chad fan.

Actually, the best strategy for Talladega is to win at one of the two preceding races at Kansas or Charlotte. Win and you can finish dead last at Talladega an it doesn’t matter, you still make it to the next segment.

I agree with that wholeheartedly but that 48 team needs to find some speed on the 1.5 mile tracks.

Johnson isn’t out of this until he is eliminated. The name of this new Chase is like the NCAA tournament “survive and advance”. Any week the 48 team can start hitting it and get dominant again. Right now the 2, 22, 24 and 4 look better, but that could change at any time as long as the 48 is still in.

I think Penske gets his second cup

They definitely have a great shot at it.

I think you have the wrong person
It seems as if the field may finally be one step ahead of Johnson, who is attempting what would be a record-tying seventh points championship, tying Dale Earnhardt Jr.