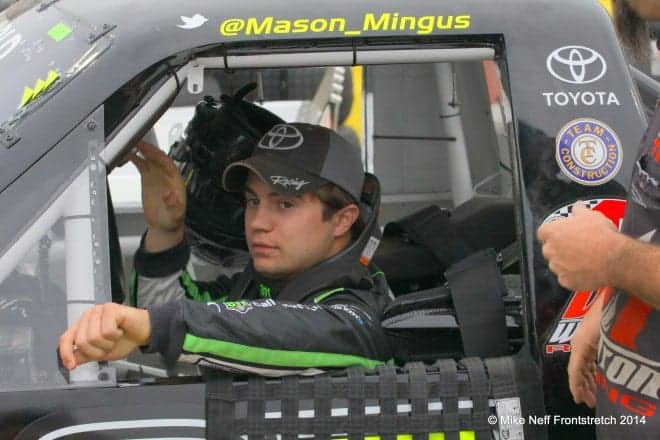 The team will make its series debut with Rookie of the Year candidate Mason Mingus behind the wheel of the No. 15 Chevrolet Silverado at Las Vegas Motor Speedway next weekend.

Mingus, who currently drives the No.35 Toyota for Win-Tron Racing, sits 11th in the Truck Series standings with a best finish of 10th at Kansas in May. Mingus is also second in the rookie battle in the Truck Series behind Turner Scott Motorsports driver Ben Kennedy.

The 19-year-old from Louisville, Ky., will be paired with crew chief Dan Deeringhoff, who was the crew chief for Clint Bowyer‘s run to the Nationwide Series championship in 2008.

“I am really looking forward to Las Vegas and my first race with Billy Boat Motorsports,” Mingus said in a release. “They have brought quality equipment to the track in both the ARCA Racing and NASCAR Nationwide Series, and I know their transition to the NASCAR Camping World Truck Series will be no different. BBM has built great trucks, and with the help of ECR Engines and my sponsors Call 811 Before You Dig and Diamond Equipment, I know I can run up front. I believe we will come out of Vegas with a strong finish, and it will be a great foundation to build on for the remaining five races of the 2014 season.”

Mingus made his series debut with Win-Tron last year in a limited schedule after competing for the team in the ARCA Racing Series. Mingus is still scheduled to compete for the team at New Hampshire Motor Speedway this weekend; no word on his former team’s plans for the rest of the season in the Truck Series.

Billy Boat Motorsports has fielded a part-time effort in the Nationwide Series in 2014 for rookie Chad Boat.