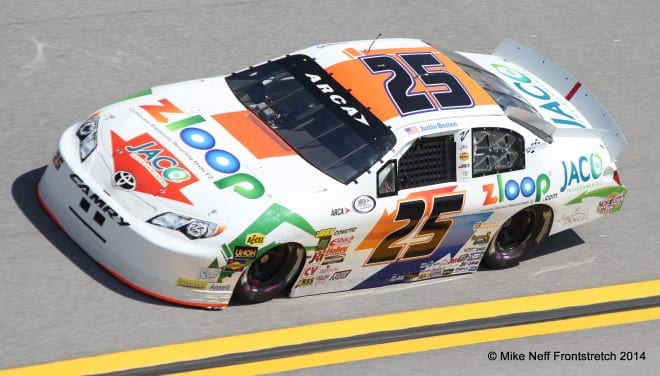 Getting that “big break” into big-time NASCAR racing is arguably tougher than in any other sport. Not only does this happen as a result of a driver’s talent; it also takes the perfect partnership between a team, sponsor and driver to get a deal done.

Since making his ARCA Racing Series debut last season, Justin Boston has gained plenty of experience prior to making a jump that will change his life. Earlier this week, Joe Gibbs Racing announced that the 24-year-old will take the driver’s seat in the No. 20 NASCAR Nationwide Series Toyota at Kentucky Speedway and Dover International Speedway. The deal comes just a few weeks after he made his NASCAR Camping World Truck Series debut at Bristol Motor Speedway with Venturini Motorsports, finishing the race in 30th after getting into a wreck while competing for a top-20 position.

But this is not your ordinary racer making a jump to NASCAR’s second-tier division. Boston just jumped into stock car racing a few years ago, and his only experience had been in the ARCA Series. After coming very close to winning a race last year, he has won a pair of events in 2014 as his growing experience begins to pay off.

“I can’t begin to thank everyone enough who have put me in a position to move up to the Nationwide Series and are giving me a great shot to be successful,” Boston said earlier this week. “Joe Gibbs Racing has top notch equipment and people in their organization, and I’m just thankful to be able to be a part of it.”

Though ARCA and Nationwide have some similarities, this is going to be a rather different experience for Boston.

Over the past two years, he has worked with Kevin Reed and Billy Venturini atop the pit box. He has seen more success with Venturini, who is also the general manager and competition director at Venturini Motorsports. Thanks to help from the Venturinis, he’ll be returning to the Truck Series at Texas, Phoenix and Homestead after the ARCA season is in the books.

But at JGR, he’ll be paired with top crew-leading talent – like crew chief Kevin Kidd–a three time winner in the Nationwide Series–with whom Boston tested the No. 20 Toyota a few weeks ago.

The best part for the Maryland native is that his sponsor is backing him for this deal. Besides being the title sponsor of the ARCA Series race at Kentucky, Zloop is backing him in both Nationwide Series contests. In a sport where opportunities are nearly exclusively based on funding, Boston is extremely grateful for the organization backing him like they do.

Though perhaps one shouldn’t expect too much from Boston in his first start. This year, JGR has notably struggled on the intermediate tracks, with a few exceptions – interesting for a team that is thought of as one of the series’ – and sport’s – best. At Kentucky, Boston will be paired up with Nationwide Series regular Elliott Sadler and last year’s championship runner-up Sam Hornish, Jr. Both drivers will play a sizable part in helping Boston learn the track and, more importantly, how to drive cars with a different tire and more horsepower.

Still, Boston has a chance for a major triumph at Kentucky and Dover. Many have piloted the No. 20 he’ll be driving, but none have yet to win a race as the team goes in a much younger direction next year. Daniel Suarez, who has driven the car once, is going to be racing full-time, and it is expected that Darrell Wallace, Jr., an infrequent competitor in the No. 20, will do the same as he moves up from Kyle Busch Motorsports’ Camping World Truck Series team. If Boston can run well over the next two races, his chance at racing for JGR next year could increase dramatically.

But first things first: a first career start this weekend at Kentucky. Boston’s been gifted a tremendous experience for his first start, and if he succeeds, he could very well be going places higher than the Nationwide Series.