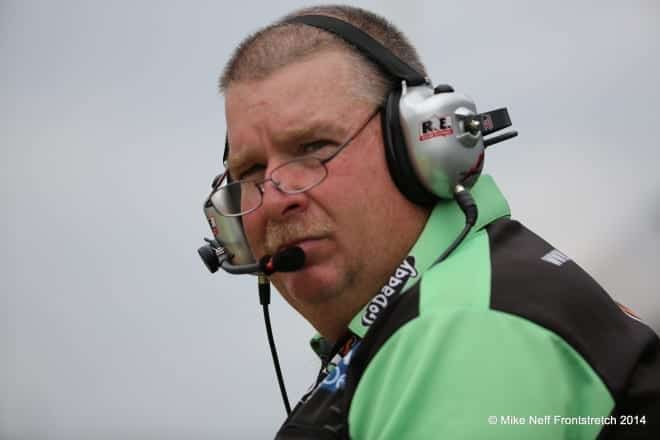 Tony Gibson and the No. 10 team are headed to New Hampshire Motor Speedway without playing a part in the Chase. They and driver Danica Patrick are still working on their own agenda to attempt to improve over last season and to try and be in contention to win a race. At the very least, certainly hope to score their first top 5 of the year. Their average starting position is up by almost nine positions over last season and their average finish is up two and a half spots.

Wherever they are in the running order, they are battling the same demons as every other team when they head to the flat one-mile oval in New Hampshire. The key is always rolling through the center of the corner and getting drive off to accelerate down the straights.

Gibson explains in this week’s Tech Talk that you can make it happen if you don’t care about your tires but, as Jimmie Johnson so thoroughly demonstrated in the first Loudon race this season, if you abuse the tires early, they won’t last long. Gibson also touches base on helping teammates in the Chase and how much better racing is when you have tires that wear out.

Mike Neff: You had a decent run going at Chicagoland before you got caught up in the incident that damaged your car. You still held on for a 19th-place finish. Was the damage on the car purely cosmetic or were there some structural components affected as well?

Neff: You had a tire at Chicago that seemed like it gave up about a second after 10 laps. Did that put some racing back in the hands of the drivers?

Gibson: I think so. I think that is what they are going to have to do with all of the tires. They all need to wear out, especially at places where the grip is high. They need to do something to where the tires will wear out and give up. Then the guys will slide around and they can make moves. That is what is good when they bring a tire like that. It is a no-brainer when the caution comes out. You’re going to come to pit road and at least get two tires. That is one advantage of having a tire like that because it opens up some of the options on your pit strategy. If they don’t wear out then it is fuel that dictates your stops and, as a result, you don’t mix up the field very much.

Neff: You’re heading back to Loudon for the second time with the new rules package. Did you learn anything during the first race with the car being down on the ground that helps the car roll through the center? We always hear that rolling through the center is the most important part of being competitive up there.

Gibson: I’d say it is probably a little easier because you’re not fighting the drama of the car going through the huge transition of travel. It is still an issue, though. You’ve got a 3,300 pound car that is trying to turn around to the left in 100 feet. It is a task no matter what but I do think it is a little easier now than it was with the older package for sure. It is easier on the braking and a few other aspects of the car.

Neff: With the car down on the ground, when you get into the corner and the car is trying to keep going straight. How difficult is it to try and keep the left side of the splitter down and sealed off as best you can as the car tries to roll over onto its right side?

Gibson: It is certainly difficult. The only way to achieve that is with rebound and big bars to force it down. The problem with that is when you do things like that it hurts the overall grip of the tire. It makes the tire wear out more quickly. It is a process that is really hard to fine-tune between your aero balance of keeping the splitter down and keeping the weight down and pissing the tires off, getting them hot and wearing them out quicker.

Gibson: It will slow it down or speed it up. It speeds up the transition of that load. The smaller bar lets the load transfer more quickly and the bigger bar slows it down. It makes the roll stiffness really high in the front which then pisses the front tires off. The bigger bar has less twist so it forces the left side to stay on the ground. It will take the load out of the right front and leave it on the left front tire. It is a trade off because you piss off the left front tire and it will stop working for you, too.

Gibson: The drive off is pretty big at a place like Loudon. What typically happens you have so much wheel in it because you can’t roll the center. When it starts to unwind it ends up breaking the back loose because you have the front wheels turned so far. Rolling the center will help that forward bite. The biggest thing is getting the weight to transfer to the left rear tire if you can to get the drive off.

Neff: Do you play with the truck arms to get that transfer or is it more in the shocks?

Gibson: Typically your friend is the wedge. You can do some things with shocks, but most of the time it is wedge that makes the biggest difference.

Neff: You have two teammates in the Chase. During the weekend do you try and test out things that you normally wouldn’t do on a race weekend if they are struggling in order to find something that will help them be competitive for the win?

Gibson: No, not really. If they need something specific we will. Typically everyone shares everything already. You don’t really have a whole lot of time once you get to the race track. You’re not going to go and do a lot of experimental crap once you get there because you won’t have enough time to get back to your zero point. Typically we try and help everybody and hopefully somebody hits on something that makes their car better and we can share it with everybody and it makes everybody’s cars better. As I said, once you get to the track, you just don’t have the time to do a lot of that experimental crap. The schedule is just too tight. You just hope you can hit on something that will help them.

Neff: This is your third year going back to New Hampshire Motor Speedway with the same tires. How much does that help you at the shop before you ever head to

the track having a notebook full of info on how the tires will react?

Gibson: It helps a lot. You’re not trying to figure out what the tire is going to do when you get to the track. It is kind of like the rule package. If you stick with the same rule package for a while you can work on it and tune around it and you end up getting better at it. It is nice to have it not changing all of the time.

Neff: There has been a lot of discussions this year from various teams about finding speed. They seem to find speed on Sundays somehow. Is that a result of gearing or the balance of the whole package? How do you find speed?

Gibson: Most of the time it isn’t that they get any faster; it is the rest of the cars get slower. Most of the time when you hear a team say that, it is during practice or qualifying. The other teams might have a little better aero package than you do or something like that but it equals out in traffic. It isn’t as big of an issue as when the cars are in clean air like they are in practice. That is probably why they say that. Practice is a perfect world and you usually don’t have a lot of cars around you. When that is going on you might not be as fast as the cars with a little better aerodynamics. When you get in the rac,e the guys who had the speed in practice will slow down and you’ll usually catch up. It all equalizes in the end.