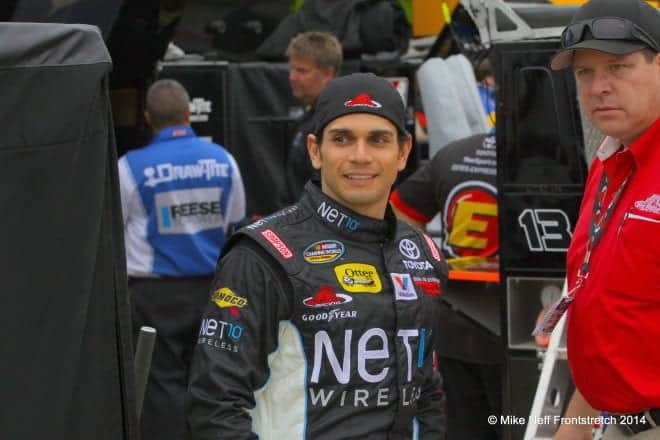 As the 2014 NASCAR Camping World Truck Series season starts winding down, the pressure for multiple drivers a step behind championship leader Matt Crafton starts heating up. While a select few still have hopes for a title, most are searching for something a bit more basic: a first career victory that assures their place in NASCAR’s hierarchy, at least in the short-term.  For those still nursing a “goose egg” in the win column, their future sponsorship or full-time ride for 2015 may be hanging in the balance. In a series where money is hard to come by, second place is often the first loser; stops to victory lane can make or break a career in a world full of developmental drivers looking to snag the few rides available.

Who’s in position to score a late-season confidence boost, taking home a trophy and avoiding a potential pink slip? It’s a long list, as there are plenty of strong, talented drivers who have run well this season but have yet to score their first career victory. With seven races left, here are five to keep your eye on…

Tyler Reddick entered into his first season of NASCAR Camping World Series competition this year, driving the No. 19 on a part-time basis for Brad Keselowski Racing. The year has featured some tough moments with wrecks and poor finishes. There have also been times when Reddick learned crucial lessons, such as respect and the negatives that come from payback, as at Pocono. However, the young driver has continued to improve with each start, scoring three top-10s in his nine starts this season, highlighted by a fourth place finish last weekend at Chicagoland Speedway.

While it looked as though BKR was off a little the first half of the season, they have certainly upped their game with recent victories by both Brad Keselowski (Bristol) and Ryan Blaney (CTMP). As the equipment improves, so does the chance at victory for Reddick. Look for Reddick to be in the running for the victory at Las Vegas Motor Speedway as his strongest runs this season have come on the intermediate tracks. A victory could be beneficial for Reddick as his future isn’t set in stone for next year and it’d certainly serve notice to BKR and the entire truck garage.

Entering his second full season in the Camping World Truck Series, German Quiroga was looking to have a breakout season with lots of success after finishing 13th in points last year. So far, he has followed through on that as he currently sits fifth in points with three top-fives and nine top-10s in the 15 races thus far this season. Two of those top-fives easily could’ve been wins, too. At Gateway, Quiroga had a quick truck and led five laps, though would be beaten to the line by Darrell Wallace Jr., who dominated the race. At Canadian Tire Motorsports Park, Quiroga had a strong truck in the late going, though would come up short just barely at the line to Blaney.

With more laps under his belt, Quiroga continues to improve as a driver and now has the experience that it takes to score the victory. If the speed is there for the Red Horse Racing driver the rest of the season, he could easily pick up the victory at any of the final seven tracks. Like Reddick, Las Vegas looks to the best opportunity as it’s a stand-alone event and RHR has the speed to contend.

Cole Custer made his Camping World Truck Series debut this year after success in the NASCAR K&N Pro Series and so far has posted solid results to date. With no finishes outside of the top 14 to date in six starts, Custer has the pure speed that is required to get to victory lane. The question will be whether he can put a full race together with the limited experience under his belt.

Being under the age of 18, Custer has a limited set of the dates that he can run the rest of the season, but that shouldn’t deter his chances. A return trip to Martinsville Speedway should bring a better finish than the 12th place that he filed in the spring based on more experience since and a short track background.

Last weekend at Chicagoland Speedway, a lot of people were surprised when Brennan Newberry posted a top-five speed in the final practice session as he has only one top-10 finish in seven starts so far this season. Starting second with qualifying rained out, Newberry put together a solid finish en route to finishing 13th.

While his chances for a victory don’t seem as strong as others mentioned thus far, it could still happen as he is getting stronger as a driver with each start, and sometimes the right strategy could pay off in a big way. Another reason to keep an eye on the NTS Motorsports driver is NTS is being careful as to what races they run to make sure they give Newberry the best opportunity. They also have Ron Hornaday coming to run a pair of races with the team, which should help boost the whole team in being able to pick up some knowledge from the four-time series champion.

In seven career starts this season, John Hunter Nemechek has finished inside the top 11 in six of them. The second generation driver has raced smart, acting like his more-experienced Cup veteran dad while bringing his underfunded truck home in one piece.  (Nemechek’s one bad run, at Canadian Tire Motorsports Park was due to mechanical issues). Another driver under the age of 18, the limited schedule hasn’t taken anything away from his season as he has been able to survive tough tracks like Dover and Bristol to finish sixth at both. Nemechek has a lot of experience in his back pocket in the form of his father as “Front Row Joe” is at every race, offering advice to his son to help him get better.

With Martinsville Speedway on the docket for next month, Nemechek returns the track with a pair of starts on the paperclip – a 16th last year and an 11th place finish earlier this year. Given his experience on short tracks from racing late models and the K&N Pro Series, as well as some solid finishes in the truck, it could be the weekend that Nemechek breaks through for a win. If Nemechek is able to accomplish a victory, it’d be huge for the family driven organization in finding sponsorship to make their program even stronger to challenge for wins on a weekly basis, whether John is driving the truck, or his father Joe is.