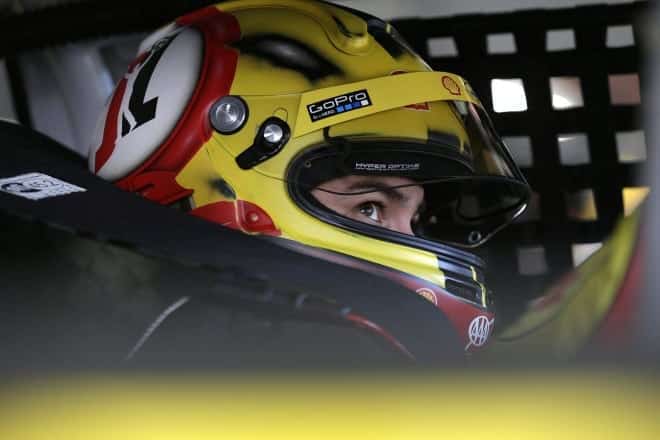 Looking for the Who, What, When, Where, Why and How behind Sunday’s race? Amy Henderson has you covered each week with the answers to six race -day questions, covering all five Ws and even the H… the Big Six.

Despite a seemingly endless string of problems for the Chase drivers, there were still seven of them in the top 10 at the end of the day. The Chip Ganassi Racing pair was strong again this week, but sometimes a team needs to take a gamble for a top finish, and it was Brian Vickers and his No. 55 team that did that, staying out under caution when nearly everyone else pitted. It didn’t buy Vickers a win, but it did help him wind up 10th, a strong result and a boost the Michael Waltrip Racing crowd needed. Props to the team for trying something different in an attempt to win. It’s not something we see often enough anymore.

What… does the championship picture look like with eight races to go?

It would probably be easier to list the Chase teams who didn’t have issues during Sunday’s free-for-all. Even points leader Brad Keselowski met trouble during the race, though he was able to come back for a top-10 run. That puts him and teammate Joey Logano firmly in the role of favorites after two races. Kevin Harvick showed that he will not go down quietly, though, and Jimmie Johnson salvaged a decent finish, though nothing about the way the No. 48 is running suggests they’re capable of a title run right now… except for consistently avoiding trouble. Dover next week is critical for them; if they don’t contend there, they aren’t going to contend in Homestead.

Jeff Gordon suffered a hit, thanks to a blown tire, but he’s looked so much like the Gordon of old that it’s still hard to count him out. Teammate Dale Earnhardt Jr. is not looking as strong as he did a month ago, and his hopes will fade if he doesn’t find something in reserve.

On the flip side, Kyle Busch, while fifth in points, still hasn’t been able to show championship mettle, and the same goes for his Joe Gibbs Racing teammate, Matt Kenseth. As for Denny Hamlin, he’s just holding on and hoping for a couple of miracles at Dover to keep him in it.

The race for the top 12 did heat up this week, with eighth through 16th separated by just 12 points. That makes Dover absolutely critical for at least a half-dozen teams, who will now need to balance risk and reward and race accordingly. They need to race harder than ever for position, but they cannot make a mistake. Even more critically and more difficult, they need to avoid everyone else’s mistakes, too.

Keselowski looked like he might dominate the day early after working his way back from a lap 194 spin to lead for a second time. All in all, the 2012 champion led twice for 78 laps, but was unable to make a move on his teammate late in the race and had to settle for seventh. More importantly, he’s making a real case for engraving the Sprint Cup trophy with his name for a second time.

Kenseth won this race last year, and he hasn’t reached Victory Lane since. This week was a tough one for Joe Gibbs Racing, and Kenseth wasn’t immune. He was involved in a trio of incidents, one of which sent teammate Busch to the garage for repairs as well. Kenseth finished a hard-fought 21st, keeping himself in decent shape to move on in the Chase.

As competitive as the sport is today, even a small mistake can mean the difference between winning a race and finishing second. A big one can be a disaster. For Hamlin, the mistake was big, and the hit to his title hopes was damaging. A loose fuel filler cost Hamlin four laps before the race hit the halfway mark, dropping him to the back of the running order after the No. 11 had led several laps earlier in the race. The lost laps also cost Hamlin on track, where he was involved with a chain reaction incident with Martin Truex Jr., Justin Allgaier and David Ragan. The damage to the No. 11 sent Hamlin to the garage. Had he not had the initial issue and been running at the front, the outcome might have been much different.

However, Hamlin wasn’t the only driver to have issues, as the second half of the race looked like the demolition derby at a county fair. The race featured a season-high 15 cautions for a total of 63 laps. Was it Chase drivers desperate for position? Non-Chasers desperate for some time in the spotlight? Maybe it was a little of both, with a little short-track impatience thrown in for good measure; whatever the cause, the closing laps were wrought with carnage. It shook things up a little, but it sure wasn’t pretty.

Logano was able to use the final restarts to his advantage this week, but let’s face it: Penske Racing has something figured out that the other teams have not hit on yet. Harvick and Gordon were able to run with them at times, but this one looked like a Penske-fest almost from the moment the track opened. Whatever it is they’ve got, if anyone wants a shot at this year’s title, they’d better figure it out soon, or it will be a lost cause.

JTG Daugherty Racing; AJ Allmendinger (No. 47 Bush’s Beans Chevy): Allmendinger is doing everything he can to advance in the Chase… and it’s working. Allmendinger avoided trouble, which was key this week, and his 13th-place finish puts him tenth in the standings with one race to go before the points are reset. He’ll need to have a stellar run at Dover to move on, but if the ‘Dinger can finish in one piece, he’s got a shot.

HScott Motorsports; Justin Allgaier (No. 51 PlanBSales.com Chevy): Allgaier was having a decent day until a lap 180 incident when Martin Truex Jr. got loose while racing underneath Allgaier. Truex slid into the No. 51, causing a four-car pileup that included Ragan, Hamlin and Cole Whitt. Allgaier got the least amount of damage in the melee, and was still able to drive to a 20th-place finish, passing a few cars on the green-white-checkered.

Germain Racing; Casey Mears (No. 13 GEICO Chevy): Mears should have had a top-20 run Sunday. His practice times were strong, and the team made a gamble to stay on track in the second half that should have given them a slightly better day. But he lost ground on the green-white-checkered run, finishing 22nd, a few notches below where they should have slotted this week.

Circle Sport; David Stremme & Landon Cassill (No. 33 Little Joe’s Autos Chevy & No. 40 Snap Fitness Chevy): Cassill’s name hasn’t been tossed around the rumor mill for the No. 9 ride next year, but it should be. Cassill has done more with less this year than perhaps anyone, and this week, his 25th-place run was a solid one for his team, which operates with fewer than a dozen people. Stremme, meanwhile had the kind of day he’d probably just as soon forget. He was running at the end, but it wasn’t pretty; mechanical woes had him behind the wall for a time and left him 40th.

Front Row Motorsports; Ragan & David Gilliland (No. 34 Taco Bell Ford & No. 38 Clean Harbors Ford): Gilliland didn’t have a great day, finishing 27th after a late-race tangle with Tony Stewart on lap 299. Ragan’s day was not smooth either; he got the worst of it when Truex Jr. got loose and into Allgaier. The No. 34 suffered extensive damage after contact with the outside wall and finished 42nd, but Ragan was unhurt.

BK Racing; Alex Bowman & Whitt & Travis Kvapil (No. 23 Dr. Pepper Toyota & No. 26 Rinnai Toyota & No. 83 Burger King Toyota): Bowman topped the list for his team this week, finishing 28th, not a terrible finish for a team that has struggled mightily this season. Kvapil returned to BKR this week, replacing Ryan Truex, but if anyone was expecting an immediate improvement – and nobody should have – they were disappointed, as Kvapil finished 32nd. Rookie Whitt was tagged in a lap 180 incident that left him in 38th, still running, but not where he might have finished.

Tommy Baldwin Racing; Michael Annett & Reed Sorenson (No. 7 Feed the Children/Golden Corral Chevy & No. 36 American Muscle Driving Experience Chevy): The TBR crowd had high hopes coming into the weekend after a couple of sponsor announcements, but it ended up being a tough week at team owner Baldwin’s home track. Annett and Sorenson avoided trouble, which was certainly more than a lot of teams could say, but the finishes were lackluster for an organization that has slowly improved this year. Annett finished 29th with Sorenson just behind in 31st.

Phil Parsons Racing; Josh Wise (No. 98 Ford): Wise kept the car in one piece, but other than that, this week was not one to circle on the calendar for this team. Wise finished 33rd, six laps down.

Jay Robinson Racing; Mike Wallace (No. 66 Royal Teak Toyota): Wallace returned to a Cup car for the first time in six years, and while it’s hard to say he made an immediate impact, his veteran presence didn’t hurt anything for this struggling team. Wallace brought the car home 34th, about where the team has been finishing.

GoFAS Racing; Timmy Hill (No. 32 US Chrome Ford): Hill returned to the No. 32 this week after piloting it for much of 2013. Hill drove a clean race at his owner’s home track to finish 35th, not the result they were hoping for.

Randy Humphrey Racing; Corey Lajoie (No. 77 Fochler Veterans Law Ford): Lajoie is a talented youngster, but didn’t have much opportunity to showcase his talents this week in the underfunded No. 77. Still, he was logging laps in his debut until lap 258, where he spun around, relegating the No. 77 to 41st at the end of the day.

This race epitomizes everything wrong with the current Chase format. Idiots bouncing off of each other every five laps at race’s end is as likely to determine the eventual champion as driver skill.