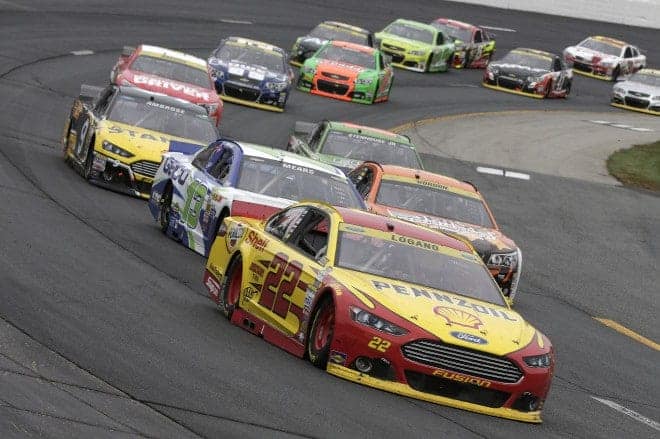 In a season marked by changes – new Chase format, new rules, and over a half-dozen rookies – NASCAR’s Sprint Cup title contenders have remained crystal clear. From Memorial Day Weekend on, Penske Racing and Hendrick Motorsports have remained a step ahead of the pack, inching by a faster-but-flawed Kevin Harvick and a lack of horsepower at Joe Gibbs Racing. They went six for six on making the new, expanded 16-driver postseason field; in the last sixteen races, prior to the Chase they won thirteen of them.

Two weeks into a crazier-than-expected playoff race, these two teams still remain above the pack. But as Penske Racing returns home with a trophy, their second straight this Monday morning Hendrick Motorsports has to be wiping some blood off their brow.

That’s because Brad Keselowski, Joey Logano, and company has made one thing clear: they’ve bought a pair of boxing gloves for September. Their speed has been impressive, their efforts exceptional, and their strategy has HMS sitting on their heels as it also becomes crystal clear their rival isn’t going away.

Sunday was Logano’s turn to shine, one week after Brad Keselowski snuck through the middle, on a late-race restart and laid claim to the first Chase race at Chicagoland. The No. 22 Ford, whose last trip to Loudon ended in a crumpled mess courtesy of Morgan Shepherd, was like a rocket ship the last 50 laps of the race. A call by crew chief Todd Gordon to come for tires, while the rest of the playoff field started to beat on each other like bumper cars, set them up to waltz through traffic. Slick new Goodyears left Logano on rails, turning a track where passing was impossible into his own personal playground. A series of late yellows, combined with stealth-like restarts, gained him 15 positions over the final stretch of the race.

“I think it was awesome to watch him restart 16th, and in four laps he was sixth,” Gordon exclaimed after the race. “High, wide and handsome.  That was pretty awesome to watch.  Just put him in a position where he could do what he’s really good at, that’s wheeling a racecar, not having him back up, let him go forward.”

How impressive was that push? In the first 100 laps of the race, no car in the field gained more than nine spots. Logano, by comparison, gained ten in just a few short laps. Track position, hard enough on intermediates appeared impossible to crack at the Magic Mile, long green-flag runs and tight corners making passing an impossible proposition. But Logano, whose pit crew consistently gave him an edge could handle all over the track, passing cars with ease along with teammate Keselowski. In fact, it could have been a 1-2 performance for Penske, despite a midrace spin from last week’s winner if the two hadn’t made contact, fighting for the lead on one of the frantic final restarts.

“I got loose,” Logano said. “Started chasing it up. Thank goodness he held on, we held on, and we both ended up with a good day out of it.”

Logano showed an aggression down the stretch, matched with a maturity no one could have foreseen the first time he drove into Victory Lane at Loudon five years ago. On that rain-shortened day, it was a stroke of luck that left him there; fuel mileage, combined with a spin at the right time and the perfect downpour orchestrated by Mother Nature. The then 19-year-old seemed out of place, still searching to find his way at a Joe Gibbs Racing team that ultimately left him sitting on the curb.

But part of being picked up by Penske has been Logano learning to turn “confused,” then “cocky” when describing his development into confidence. His restarts, borderline and aggressive, left old rival Harvick jawing after the race, claiming NASCAR should have penalized the No. 22 on multiple occasions for jumping early.

“I thought it was pretty clear,” he said. “On two stripes and one stripe, you start in between those two spots. It was pretty evident [Logano] was a car length or two car lengths starting before that. It was like nobody was watching upstairs.

“Maybe I just need to be more aggressive on my restarts and start sooner than the double lines.”

Making your rival mad, while refusing to respond (Logano sidestepped the issue); seems like someone’s doing something right. Harvick’s trash talk with Logano (think “firesuit in the family”) has been well documented, but Penske’s also visited victory lane nine times, over the course of this season while Harvick hasn’t recorded a win since Darlington in April. In fact, no one with a Hendrick chassis and engine has recorded a win since Kasey Kahne on Labor Day: it’s been Penske, Penske, Penske, with three straight to take a 1-2 position in the Chase standings.

“It’s great for everyone at Team Penske,” said Keselowski of their position, putting two cars straight into the next round. “We certainly have a lot to be proud of, but there’s still a lot of work to do.”

That’s the mindset, established over there as if Penske still remains the underdog. With eight races left, it’s quite possible they could still slip to that level; points reset during the Chase’s second round, and if there’s anything the new format has taught us thus far it’s that it only takes one bad race to quash your chances (see: Denny Hamlin, Aric Almirola). But you get the sense at Penske, unless bad luck pops up right in front of them this organization isn’t going to beat themselves. There’s no drama on pit road, a la Harvick and Stewart-Haas Racing; just cohesive crews that gain their cars track position on every stop. There’s no strategy issues, only decisive chess moves that make Hendrick’s calls seem juvenile by comparison. Crew chief Chad Knaus’ call to pit Jimmie Johnson early, during a series of yellows over the final 100 laps was based on a potential push to win on fuel mileage. Instead, J.J. sat fifth at the checkered while teams with later stops, on fresh rubber simply blew by him.

HMS still has time to fight through their problems. Dale Earnhardt, Jr. had a hard fight, overcoming a flat tire to race back into the top 10 at Loudon. Johnson, despite a car seeking more speed has ironed out an average finish of 9.5 thus far. Jeff Gordon, the only one of their four drivers to lead laps in this Chase still looks good to advance despite a late blown tire that left his No. 24 in pieces Sunday. If there’s one organization that knows how to peak at the right time, with a dozen total championships in the last 20 years it’s this one.

But it’s clear, to get to the top of the mountain at Homestead Hendrick’s going to have to find another gear. So far, when it’s come time to show your cards Penske’s the one holding a royal flush, and even Harvick looks a little better at this stage than the HMS juggernaut that could, in theory still sweep the Final Four spots.

“Our goal is to win the championship,” Penske’s Logano said when asked if they’ll relax at Dover, guaranteed a spot inside the next round of the Chase. “We have to get from round to round.  Just because we’re in the next one doesn’t mean we’re going to take a week off next week.”

No, there’s no off days at Penske; just a push to be at the top of their game, 24/7. It’ll be interesting to see, with a virtual “gimme” for Johnson at Dover up ahead if Hendrick can now rise to the challenge… and punch back.

As you say its apparent that the engineers at Penske have found some advantage. But its interesting to note that this time, unlike when Newman and Wallace were the drivers, they seem to be sharing the information between the two cars. Maybe they learned from that little intermural dustup.

Poor Yappy Harvick. Maybe he should stick to the NW series where he can whine and bully to his heart’s content and no one will push back. The whole race with your equals thing just doesn’t suit him.

lol…so true seeing he clearly didn’t have the best restarts, he needs to stop complaining on Tv and own up to his own faults at the time. He should have kept his Yap-Yap shut (I miss Ricky Rudd.)

I don’t know why people say its so hard to pass on this track. From what I saw on Sunday, there was plenty of passing. You just had to work hard for it. Just like short track racing. If teams ride around the first part of the race, you can’t expect much passing. The race on Sunday was one of the better ones at NHMS in some time. Races at this track used to be very entertaining with plenty of passing, so maybe we are getting back to that. Wishful thinking maybe, but I thought it was a good race on Sunday