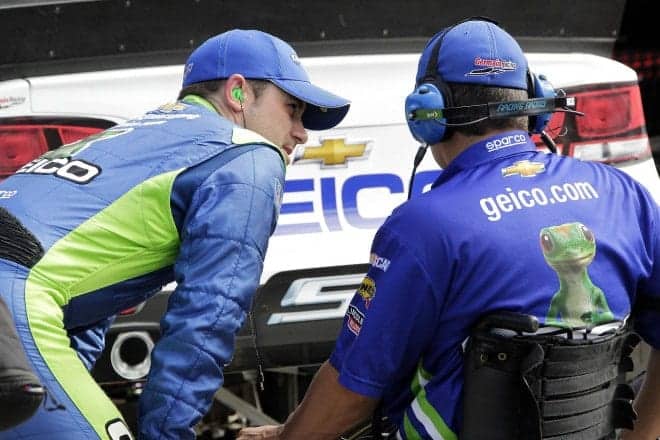 NASCAR has begun to take random samplings of tires from multiple cars at the end of each race. The tire confiscation was first noted two weeks ago at Chicagoland, the first race in the Chase for the Sprint Cup.

As first reported by Motorsport.com, the tires of four teams (Nos. 2, 4, 31 and 78) were taken back to the NASCAR Research and Development Center in Concord, N.C., for evaluation. The thought was that these teams may have been bleeding air from the tires to gain more grip than NASCAR’s mandated air inflation allows for.

Again this weekend at New Hampshire Motor Speedway and the Sylvania 300, NASCAR confiscated four more team’s tires after post-race inspection was complete. Tires from the No. 13 of Casey Mears, the No. 22 of race winner Joey Logano, the No. 42 of Kyle Larson, and the No. 48 of Jimmie Johnson.

Sprint Cup Series Director Richard Buck told Motorsport.com, “That’s just part of expanding the R&D Center. We bring the stuff back, keep it under our custody like we do with all the parts that are there and keep them for further evaluation. It’s just part of the process. Some were taken during the race, some after. It’s just a nice sampling of what’s out there.”

There was no confirmation or admission that there were any issues with the tires taken by NASCAR.

I’ve grown up most of my entire life hearing about cheating using bleeder valves in NASCAR. I always assumed it would be an unfair advantage, and never put much thought into them… until now.

I have no clue as to what the best PSI should be, and I am sure it varies from track to track, but I finally put some thought into it and it seems that they couldn’t work unless they were computer controlled.

To put it simply, whatever PSI is deemed best, when a car enters a turn, it greatly increases the amount of G-Force on the car and thus the tires. Thus, any car running bleeder valves in order to keep a certain PSI in the tires would end up with flat tires after a few laps, unless the bleeder valves were computer controlled.

Granted, I am sure it pretty simple these days to make computer controlled bleeder valves, but I doubt it is simple to hide this fact from a simple inspection.

Am I missing something here? Could simple stimmed bleeder valves be an advantage? Or did I hit the nail on the head and prove that without a full computer controlled air PSI system to the tires is the requirement for “bleeder valves” to work?