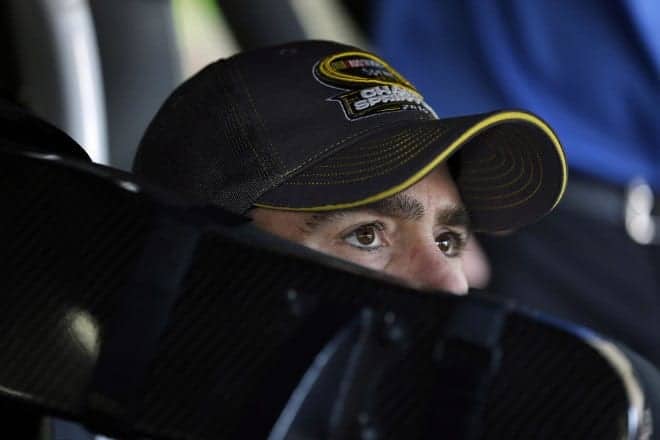 There’s only one race left in the opening Challenger Round of the NASCAR Chase for the Sprint Cup, but plenty of uncertainty after the Sylvania 300. Nine championship hopefuls are separated by only 12 points heading into the first elimination and four won’t advance, making this edition of Who’s Hot and Who’s Not a sizzler.

Through two races, the revised Chase is playing out just as NASCAR CEO Brian France and other higher-ups envisioned it would. The AAA 400 at Dover International Speedway will indeed boast their desire for “Game 7 moments.”

Who’s up and who’s down before the first cutoff? Find out below.

There’s no way Team Penske is going hungry after Sunday. The organization caught two succulent rock lobsters this season after all. Loudon’s version of a trophy isn’t exactly traditional, but it tastes just as sweet for Joey Logano, who locked himself into the Contender Round with a New England-style victory. Logano followed up teammate Brad Keselowski‘s dominant showing at Chicagoland Speedway and July win at NHMS with one of his own.

Both Penske drivers are perched atop the standings and are safely qualified for the next round, but the No. 22 team is the hottest bunch in Cup since departing Watkins Glen International. Logano has a series-high four top 5s and an incredible 4.83 average finish over that span, but he was beginning to trend upward even before that, as eight of his 17 top 10s have come over the past nine events.

Logano is also deserving of the top Hot or Not spot because of a tasty matchup at Dover. Since scoring a 15th in his track debut, Logano has shown signs of continued improvement, culminating in a stretch of five straight top 10s.

The miniature Miles the Monster trophies given out at Dover aren’t edible, but that doesn’t mean that Jimmie Johnson won’t be after win No. 10 at the Monster Mile. Judging by Johnson’s recent form, he may want to clear off some extra shelf space just in case.

Johnson has back-to-back wins at Dover and with finishes of 12th or better in six consecutive races, appears fully recovered from his July-August slide.

Kevin Harvick has done exactly what was needed to compete for the championship through the first two Chase races. For the entire season its been clear that Harvick possesses the speed to make the final four, and now he’s showing pinpoint accuracy. The lack of mistakes puts Harvick 41 points ahead of the cutoff and third overall behind only Team Penske.

Harvick’s need for improved consistency and signs pointing toward a realization of those needs have been well noted in Hot or Not, but the No. 4 team 2.0 is now an actuality – and a dangerous one at that. To illustrate the transformation, Harvick has posted three consecutive top 5s for the first time as part of seven top 10s in the last nine races.

AJ Allmendinger used a clean sheet in a second, attrition-filled race to stay in contention for a spot in the next round. Allmendinger’s 13th at NHMS is tied for his best finish since earning a Chase berth at Watkins Glen, and keeps him squarely on the bubble, seven points ahead of 13th.

Kyle Busch brought the No. 18 Toyota back from the brink at NHMS. Busch seemed destined for an early exit from the Chase after getting caught up in a lap-188 wreck involving two other Chasers only to stay on track and collect an eighth in what he described as a “destroyed” Camry. It was a disaster averted for Busch, 28 points up on the bubble.

If Busch can replicate his average Dover finish (14.4), his Chaser status will remain safe.

The same cannot be said for Matt Kenseth – or Denny Hamlin.

Kenseth was one of the other two Chasers involved in the same lap-188 wreck that entangled Joe Gibbs Racing teammate Busch, but he wasn’t as fortunate. That’s because he found the wall a second time, due to a wheel-hopping Paul Menard, and ended up 21st. Kenseth was headed for a better finish but didn’t have time to recover after the run in with Menard, which occurred less than 35 laps from the checkered flag. If Kenseth’s involvement in Keselowski’s spin is included, the No. 20 Toyota was part of three different on-track altercations.

Currently, Kenseth is tied with Carl Edwards for eighth in the standings, just eight points ahead of Hamlin, and he’s slumping, with a 24th-place average finish over the last three events.

Hamlin will be forced to battle his way back into a position to advance to the final 12 because of a fuel probe issue that prevented the No. 11 Toyota’s gasman from fueling the car during an otherwise routine pit stop. The crew was forced to push the Camry behind the wall, where it stayed for several laps while they made repairs.

Hamlin has flip-flopped good finishes with bad since Pocono Raceway in July and will need to do so again to erase the six-point deficit between himself and 11th-place occupants Kasey Kahne and Ryan Newman. There’s only one problem: Hamlin has just two top 10s in the last seven trips to Dover.

Fortunately for Hamlin, Ryan Newman is the worst at Dover recently among all Chasers. In the last four visits, he has an eighth but finished outside the top 20 in three other starts. To make matter worse, Newman hasn’t shown what it takes to win, evident by the 24 laps he’s led and two top 5s this season, both career worsts.

Of course, Newman might advance without doing anything spectacular if the drivers behind him hold true to form.

Greg Biffle does have a history of success at Dover, with two wins, but doesn’t have the firepower to back it up right now. Biffle’s 16th at NHMS isn’t a true indication of his struggles. The No. 16 Ford was two laps off the pace before being awarded two free passes.

Biffle ranks 14th in points, because his Roush Fenway Racing team repeatedly fails to keep up with adjustments and lacks the speed to stay in contention, while other endangered drivers around him are there solely due to penalties and wrecks.

Kurt Busch is a perfect example of the latter. Busch was a Hot or Not mention last week because of a commitment line violation and earned another at NHMS with a late-race blown tire that flattened the side of the No. 41 Chevrolet and his Chase.

Busch fell six spots to 15th in the standings after a 36th and needs a solid finish at Dover to recover. With a substandard record there, including one win and an 18.2 average finish in 28 tries, his chances of advancement aren’t favorable.

Wow, Aric Almirola doesn’t even get a mention for finishing 6th? He battled a couple of times from the mid-20’s up to the top ten a couple of times and was literally running door-to-door with Jimmie Johnson trying to take the 5th spot as they crossed the stripe and he can’t even get a mention? I must have misunderstood the title of this article. I thought it was about the race, not the silly Chase.