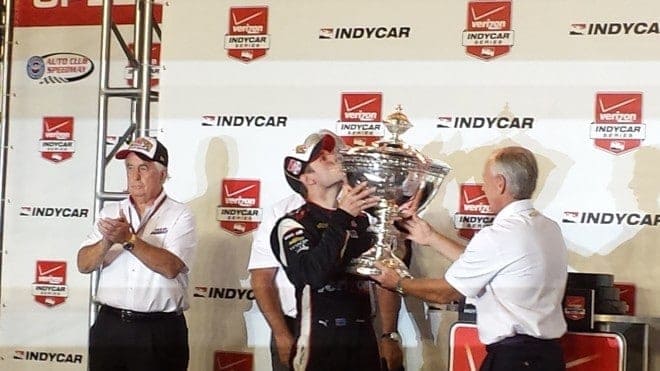 Pagenaud ended up as the highest ranking driver who was not part of one of the three powerhouse organizations of Penske, Ganassi or Andretti. He wasn’t just the highest ranking though, as he made a legitimate run for the championship, entering the final race of the season with a slim chance, but a chance nevertheless, to take the title from Team Penske, something Ganassi and Andretti failed to do. Pagenaud and team had a hiccup at the absolute worst time and ended that day 20th, losing two spots in the points to wind up fifth, but it was, overall, still a great year for the little team that could. It’s important to remember these guys work with a fraction of the resources that the teams they compete with have at their disposal.

Pagenaud also brought home two winner’s trophies during the season, not least of which was the inaugural one for the Indianapolis Grand Prix. Yes, they came up short, and yes, they fell apart in the clutch when it really mattered, but a talented driver and a talented, if small, team, let everyone know they were there and that counts for a lot.

Was Justin Wilson even out there this season? I mean really? Did anyone see the guy? That pretty much sums it up. No wins this year. Not even any podiums. And a humdrum 15th place points finish, in a series that really only had 21 full time drivers. His best finish was a fourth at the first Belle Isle race and that was his lone top 5. Most of the seven top 10 finishes were on the tail end of the ranking. Then again he only had two finishes outside the top 20 and was running at all but two events at the checkered flag. That pretty much sums it up though. It was kind of a nothing year, with unremarkable mid pack at best finishes for Wilson.

Maybe this is being a bit hard on the guy. After all he does drive for small Dale Coyne Racing, never the best funded organization in the garage. It’s hard not to be a little let down though. Last year he had four podium finishes and ended the year ranked sixth. This was, at the least, a big step backward.

Give us a minute to try to figure out how to make this not sound, well, mean. This is the second full time season for Saavedra and he was unable to improve over his 21st place finish from last year. He finished ahead of Ed Carpenter and Mike Conway, although both only ran part-time schedules, which means he was last among full time competitors.

He did win the pole for the inaugural Indy GP, although how that all turned out might be a pretty good summary of his year. His car stalled on the grid and was clobbered by competitors coming from behind, putting him out before he ever started. He does drive for the smaller KV Racing, and that’s not known as a great car, but then so does Sebastien Bourdais and he finished 10th with a win on the season. He got the D- solely because gets a little credit for that pole position.

Carpenter ran only six of the 18 races on the card as he split driving duties with Mike Conway and drove only on the oval tracks. Can’t say he didn’t make the best of the six races he ran though, as he finished top five in three of them, including a win at Texas, and once again, started on the pole for the Indy 500. He was also running well at Indy before a late race crash ended his day. Yes, admittedly Sebastian Saavedra isn’t much of a benchmark, but Carpenter finished only 29 points behind him, and 10 ahead of tandem driver Mike Conway who ran 12 races, so it definitely speaks to maximizing one’s opportunities.

He’s the only owner driver in the series and taking himself out of the seat on the road and street courses, a place where he has struggled mightily, in favor of someone who does better at those tracks, while concentrating on the ovals, where he is an ace, and running the team, proved to be a smart move. Between the two drivers, Ed Carpenter Racing brought home three wins on the season. Happy sponsors, big checks, and next year a partnership with Sarah Fisher Hartman Racing, another team on an upward trajectory, means things look promising for Carpenter’s organization.

Finally.  That is the word that is best associated with Will Power for the 2014 season.  The Australian has shown speed each year he’s been with Penske, but he hasn’t been able to use his talents to earn the overall points title.  This year, Power put it together, going through a season with three wins, and 15 top 10s.  Though he seemed to lose his touch as the end of the season came about, his stellar drive at Fontana, starting last and racing into the top 10, was the stuff of a champion.  There’s little reason to believe that Power won’t again challenge for the title next year now that the frustrations of years past have been taken care of.

Scott Dixon had a ‘what if’ kind of year.  The first half of the year was very much one of transition, as Dixon got used to new teammates, and the organization got used to the switch from Honda to Chevrolet engines.  But once, Dixon got going, he showed why he was the defending champion.  For the last eight races of the schedule, Dixon never placed lower than seventh, earned two wins, and almost put himself into the championship discussion.  With things now settled at Ganassi, it will be interesting to see how he performs next year, as he’ll enjoy a higher level of comfort.

Ugh.  How else to describe Takuma Sato’s season.  The Japanese driver continues to show flashes of speed, and at times, amazing moves.  Yet he’s also just as likely to make a wild error and crumple his car, or another driver’s.  See: Pocono, pit road accident with Ryan Hunter-Reay.  However, if it isn’t Sato’s doing, it was sometimes that of his car, as the consistency didn’t quite seem like it was there.  His four top-10s isn’t getting the job done, and though team owner A.J. Foyt might like Sato’s “No Attack, No Chance” mindset, it may also be his undoing.  It’d be great to see Sato put together a string of races where he’s just able to bring the car back in one piece, but right now that seems to be the biggest challenge.

Josef Newgarden’s 2014 season was an up and down affair, but the problem was that it had more downs than ups.  Though he had seven top-10s, he managed just two top-5s.  Sure, the organization he raced for wasn’t top-notch, but Newgarden never quite showed the required consistency to ever be mentioned for race wins.  He did, however, put together a decent run at the final three races, taking fifth at Milwaukee, sixth at Sonoma, and then tenth at Fontana.  Those kinds of results are what the 23 year old driver needs to do.  With Fisher Hartman merging with Ed Carpenter racing, Newgarden will now have more resources at his disposal, as data sharing should help with one component, and being able to confer with Ed Carpenter and Mike Conway should assist with the other.  The 2015 should come with a sense of optimism for Newgarden.