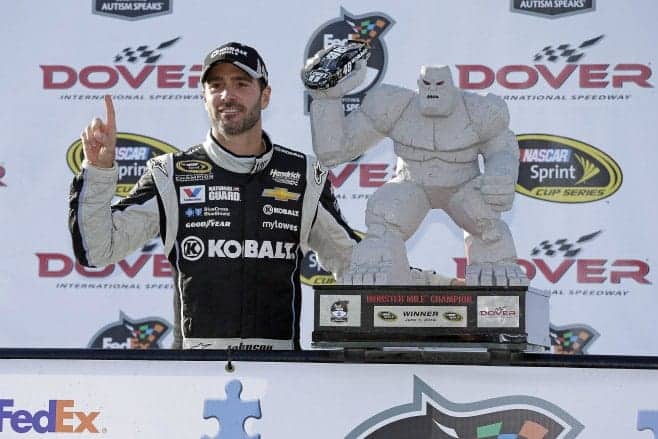 ONE: MONSTER SUNDAY AT THE MILE

What a race we have ahead of us at Dover International Speedway this weekend, with as many as nine drivers in contention for the final transfer spots into round two – the Contender Round – of the Chase.

Given the propensity of the Monster Mile to chew up cars in the blink of an eye, trouble for the Chase drivers looking for the final spots could prove catastrophic. And if what we saw at New Hampshire Motor Speedway is anything to go by where numerous Chase drivers had issues, just about anything can happen.

Expect different drivers to flirt with the dreaded cut off to the bottom four all race long – and I wouldn’t be surprised if we see someone race in to the next round in the waning laps, perhaps even the final lap.

One way or another, Sunday should be fascinating to watch.

It’s good to be a Team Penske driver right now, with Brad Keselowski and Joey Logano both through to the Contender Round courtesy of their respective wins in races one and two of the Chase. In total, the Penske pair has won a whopping nine of 28 races this season, and with 12 top 5s each they sit atop that particular statistical category.

When you add in the series-best 1,408 laps led for Keselowski and the 794 laps led (fourth best) for Logano it’s clear to see that if you want to win the big silver trophy at Homestead-Miami Speedway, you’ll likely have to best one or both of these drivers. The simple fact is both drivers have that elusive combination of sheer speed and the ability to get it done where it counts. That goes a long way.

Something that an especially ebullient Logano noted post-race: “The confidence is high at the (No.) 22 team right now. All of Team Penske, we all feel like we’ve got some championships to win this year, not only on the Cup side, but the Nationwide side also, and with IndyCar. We’re just trying to catch up to them.”

The overnight rating for the NASCAR Sprint Cup Series race at New Hampshire Motor Speedway was 2.2, essentially the lowest of the season so far, excluding severely rain-delayed races. The first Chase race at Chicagoland garnered just a 2.3 (3.7 million) rating, so after all the hullabaloo of the newly minted Chase format, not to mention an extensive advertising campaign, these initial numbers must make pretty depressing reading for the higher-ups in Daytona and Charlotte.

Now the one positive to note here is that NASCAR was the highest rated sports telecast outside of the NFL and college football, so there is that, at least.

In general it should be pointed out that TV numbers for NASCAR trend downward after the high point of the Daytona 500 as the season inexorably wears on. Typically we see more positive numbers for the Charlotte, Talladega and Homestead races, so the top brass will be hoping to see that trend replicated at the very least.

The one big unknown is of course the final race of the season. Given that we’ll have four drivers racing tooth and nail for the big prize, one would expect a significant bump in ratings – and even more so if the sport’s most popular driver, Dale Earnhardt, Jr., makes it all the way.

It was not exactly a banner weekend for Joe Gibbs Racing at Loudon, with all three drivers getting involved in wrecks or spins across the course of an eventful afternoon.

Kyle Busch turned what could have been an appalling day into a very creditable eighth-place finish, while Matt Kenseth limped home in 21st. Busch was so ecstatic with his finish that he tweeted a picture of his patched up car and asked, “Can u believe this is the 8th place car..no quit in this team!”

Can u believe this is the 8th place car..no quit in this team! pic.twitter.com/UpwsqENxSl

Denny Hamlin, meanwhile, was dealt a crushing blow to his Chase advancement hopes when a faulty fuel probe issue saw him go multiple laps down all after leading 32 laps in the early going and looking racy. Gasoline was poured on the fire on lap 181 when Hamlin was involved in a melee not of his own making that saw him take his battered Fedex Toyota behind the wall. Hamlin would eventually rejoin the race and finish in 37th, 38 laps down – all of which saw the veteran JGR driver drop below the cut off line in points and facing an uphill battle at Dover this Sunday.

The sliver of good news for Hamlin is that he is only six points out of 12th place, so his fate is still in his own hands. The downside? Dover is one of his worse tracks.

FIVE: THE CRAZIEST TROPHY IN NASCAR

I have to give a quick shoutout to one of the quirkiest and most entertaining trophies in NASCAR: Miles the Monster. The trophy itself is a 30-inch stone replica of the 46-foot, 20-ton version that stands proudly outside the track with gleaming red eyes. A 1:24 diecast of the winner’s car is placed in the monster’s raised right hand.

Jimmie Johnson has a record nine of these trophies, having won the last two races held here and seven of the previous 11. Don’t be surprised if he makes it a round 10 this weekend.

“Now the one positive to note here is that NASCAR was the highest rated sports telecast outside of the NFL and college football, so there is that, at least.”

So it beat what? Major League Baseball and Golf? C’Mon!… This is the friggin’ Chase! It should be demolishing all competition!

Nascar is a niche sport that can’t compete with football. The great show (read door to door racing) that drew football-like ratings in the past is long gone as NASCAR seeks to emulate IROC and Indy-car as a spec series. How’s that working for them?

Two factors that are often overlooked – there is no hometown interest like in the stick and ball sports. Its a lot easier to root for the home team in pro sports, or the Alma Mater in college than it is Joe/Jane Sixpack in a race car. Plus ladmit it or not Nascar is still a Southeastern sport. Its proven every week when the ratings come out. 9 0f the Top 10 markets are southern.

The ratings are what the ratings, self delusion and spin columns will not change that. The over focus on the flawed Chase alienates the remaining fan base and the ratings may be reflecting that. I find my interest waning as the constant Chase chatter interferes with my ability to just sit down and watch a race. I watched Race Hub every night until a few weeks ago. With nothing but manufactured phony Chase excitement I won’t be watching again until next year.

“Plus ladmit it or not Nascar is still a Southeastern sport. Its proven every week when the ratings come out. 9 0f the Top 10 markets are southern.”

Well as a born & bred Southerner and lifelong stock car fan, I have no earthly idea why those television markets are still strong for lack luster racing (Chicago, Indianapolis, Kansas, New Hampshire, California, Las Vegas, Kentucky, and on).

At this point I follow ProCup the way I followed Winston Cup (ahem) back in the 70’s/80’s. NASCAR, like the old Elvis, has become a parody of itself.

Just another reminder that just because we are fans not everyone is.