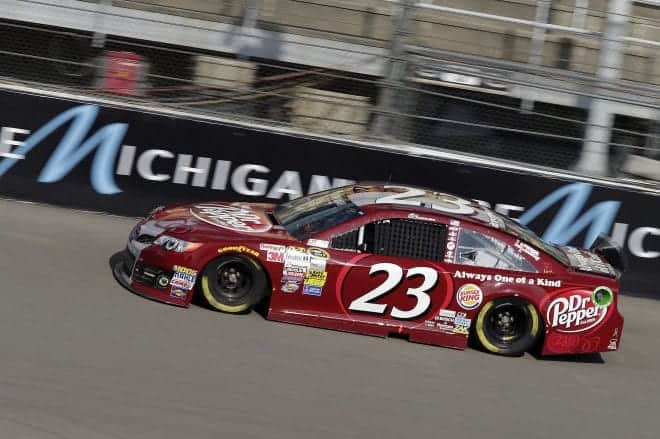 You know when you’re about 4 years old and you want to go in the pool, but you don’t know how to swim, so you’re just kind of standing by it, and then all of a sudden a family member takes you and throws you into the water because he or she thinks the best the way to teach you how to swim is to put you in a life-or-death situation?

Only you don’t magically figure out how to swim in the four seconds you have, so another family member has to jump into the water and pull you out.

That’s kind of like what’s happened at BK Racing and Swan Racing this year. These two organizations adopted that philosophy by plugging talented young drivers into less-than-stellar rides in a series they weren’t ready for, and two rookies have already drowned.

Parker Kligerman, 24, a former Penske Racing development driver, was the odd man out at Swan Racing after just eight races when the team expanded in the off-season and then realized it didn’t have any money. Kligerman was 38th in the standings at the time.

Meanwhile, Ryan Truex, 22, hasn’t officially been released at BK Racing, but was told before New Hampshire that he wouldn’t be in the No. 83 car that week. He was 37th in points and had posted two top-30 finishes in 26 starts.

Neither of these kids ever had a shot in hell at being competitive. Now, Kligerman’s looking outside of NASCAR for rides and Truex is possibly in limbo.

But Kligerman’s an ARCA champion and a Camping World Truck Series winner and Truex won a K&N Pro Series East title at 17. They’re talented drivers who moved up NASCAR’s ladder much too quickly and are now paying the price.

However, when a Sprint Cup team dangles an offer in front of you like an old man would a piece of candy with a 4-year-old, it’s hard to say no – “Hey, big guy, want to race against Jeff Gordon in a Sprint Cup car?”

That’s every young racer’s dream. Was Truex supposed to say, “No, I think I’ll just wait and see if something opens up in Camping World Trucks”? Maybe these kids weren’t quite thrown in the pool like my analogy up top, but they might as well have been.

I’m not sure if Swan and BK owners read the same book last year, or maybe just watched too much Kyle Larson highlight tape, but they formed the same strategy at the end of 2013. It was to put really raw 20-something drivers into Sprint Cup and hope their talent is enough to take their teams out of the backmarkers. It was a drastic shift from the old strategy of using reliable veterans — David Stremme, David Reutimann, Travis Kvapil, Landon Cassill, etc. — to bring the car home in one piece and gradually build the team.

Maybe Swan and BK weren’t seeing enough gradual growth, but they scooped up all of the unclaimed talent they could at the end of 2013 — both organizations expanded — and swung for the fences.

After eight races, Swan sold 23-year-old Cole Whitt’s team to BK Racing and shuttered Kligerman’s in one of the bigger embarrassments in recent memory. After 27 races, BK Racing appeared to have had a change of heart. Kvapil was invited back to take Truex’s seat at New Hampshire, dropping the race’s rookie count from eight to six. Don’t be surprised if it hits four by the end of the season.

Whitt, the youngest winner ever of the USAC National Midget Championship, is 33rd in points and Alex Bowman, another former Penske developmental driver, is 36th in BK’s No. 23. Whitt and Bowman probably aren’t learning much about how to compete with Brad Keselowski when they’re running five laps down in a car that’s nothing like his in a series they shouldn’t be in just yet.

The only thing Swan or BK has accomplished this season is derail careers. Swan no longer exists, and BK is no closer to getting out of the backmarker spots than it was when the season started. Maybe these young drivers thought they would start at the bottom of Cup and they’d use their talent to work their way up to Hendrick Motorsports, where they could win lots of championships and ride unicorns to the award ceremonies. Not only has that not happened, but there also hasn’t been a single driver from that area of the finishing grid (Front Row Motorsports, BK Racing, Go FAS Racing, Tommy Baldwin Racing, Circle Sport) to ever move up to a better team. Ever.

The rear of the field is a place where careers go to die. It used to be veterans who had their chances elsewhere first, though. Now, it’s young talent that’s being recycled. Are Whitt, Bowman and Truex’s stories going to end up any different than Kligerman’s? Probably not. If Truex is welcomed back, it might end up being the worst thing for him.

They’re young drivers, so maybe they bounce back and end up having successful careers, but this black mark on their records isn’t going to help. Kligerman does have that highlight tape of flipping on his roof at Daytona to shop around.

No matter a driver’s age, when they’re dropped out of the bottom of Cup, there’s a low probability they’ll ever get back.

Here is the really sad part: this may just be the start of a disturbing trend. If BK Racing continues to prey on young talent, more careers will be tarnished. It’s like a crappy Field of Dreams — if they offer the rides, young drivers will come.

When that happens, we all lose. For all of the highlights that Larson has provided, we’re missing many more from Whitt, Bowman, Kligerman and Truex.

All we can hope is that one day soon when BK Racing approaches a young, talented driver and says, “Hey guy, want to race with Jimmie Johnson?” that driver says, “No, thanks.”

Both these teams, and the drivers are in a no-win situation. Neither is going to reach the level of the mega-teams. So maybe the best you can do is make some money, do what you enjoy and don’t hurt yourself. Maybe thats not so bad.

Twenty years ago, the strategy these teams are using was a good one. Competitors started out with a lower-level team, as a rookie driver, and every silly season was about which established team signed which impressive driver. Teams became known as a sort of farm system, and it wasn’t a bad gig, because after all, people have to start somewhere. The big teams need people to compete against, and who knows, you might pull a Jody Ridley or a David Gilliland at Kentucky and drop a few jaws. It doesn’t work that way anymore, though. The pattern now is that you catch someone’s eye in a low-level series, and excel in equipment that could often finish top-ten in the next series up. And then you win in the Trucks or Busch, and then you get a Cup gig, and if you don’t win as a rookie, or win three races in your sophomore season, clearly you didn’t measure up to the greats, and it’s off to start-and-park land for you.

“…and if you don’t win as a rookie, or win three races in your sophomore season, clearly you didn’t measure up to the greats, and it’s off to start-and-park land for you.”

I agree with you, but that leaves me scratching my head as to why Ricky Stenhouse still has a Cup ride. We all know why Danica does.

The sponsors probably like that “2-time Nationwide Series champion” tag, and the larger “social media footprint” that comes with dating Patrick.

I often wonder what NASCAR would look like if, as in all other major sports there were salary (or in nascar’s case spending) caps that allow all teams to be competitive. Would Hendrick be the colossus it is if they could spend no more than any other organization? Would the overall product be better?

What would it had looked like if some of the iconic team owners, some still the sport, many more not, had reinvested more in the teams less in condos in Florida? But your point is a good one.

There’s a long list of drivers that have wallowed in the Nationwide and Truck series too. There’s only a handful of truly good rides in the Cup series.

I think it is irresponsible to blame BK Racing for “gobbling up young talent and ruining careers.”
A. No one forces these drivers to go racing for BK. They could simply pass on the opportunity.
B. These drivers should be in a strong and robust Busch/Nationwide/Xfinity Series, not the Cup-Lite that competes as the pre-show now. Regear the series as a standalone series 80% of the time with single events at Daytona, Charlotte, Darlington, and Dover and double events at Richmond, Martinsville and Bristol. Otherwise keep the Series East of the Mississippi (with the exception of Iowa) and run the remaining events at two road courses and the short tracks (IRP, Myrtle Beach, South Boston, Eldora, etc.) 40 Cars at the Cup Co-Events, 32 Cars at the Stand Alones with Cup Drivers only allowed to compete for the 8 spots at the Co-Events. Put the Bulk of the Money into the Championship Fund and require teams to compete the full circuit to share in the money. Problem solved.
C. Racing is never going to be fair. What about JD Stacy in the 1980’s, who tried to put his name on every car in the field, then went bust and took some drivers under with him? What about other teams who ran out of money mid-season or whose sponsor nver paid the bills?
D. BK came into existence, because Red Bull pulled out of the sport (did Red Bull ruin Scott Speed’s Career, Brian Vickers?)

Isn’t the real issue a lack of competitive teams? In SC thats in large part by design, in fact I dare say you will never see another major team in there. It doesn’t have to be that way in Nationwide, but apparently it is. Trucks are a lost cause.