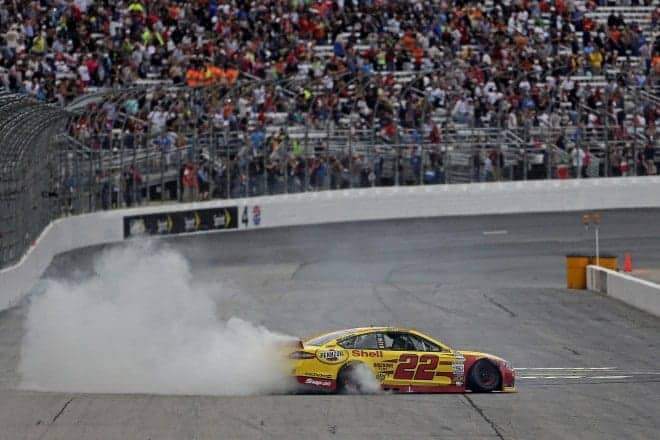 It’s moments like this one that I really wish I understood cars better.

Like, I know NASCAR issued changes to the car that will reduce horsepower and downforce, with changes to the spoiler and the addition of a tapered spacer. I know that these changes are meant to emphasize passing and better racing, making the cars tougher to drive.

But I don’t know … how. I don’t know if it will make the racing better, or how it will impact the on-track capabilities of driver and car. I don’t know what to make of these changes or how to read into them and understand what they mean. Raw numbers and terminology? No problem. Yet imagining how (or if) NASCAR is going to be different in 2015 based on the announcement they made Tuesday is problematic for me.

One thing that gives me pause, though, is that drivers apparently gave NASCAR a lot of positive feedback on the changes. I think that’s great and all, but is what the drivers want really what’s best for the fans? Wouldn’t you think that what makes drivers comfortable and content would make for a crappy product on the track?

Like I said, I wish I had more engineering expertise, or at least knew more than just the definition of certain words. It would be helpful to know whether the drivers like the changes because it makes the cars easier to drive or because it makes passing easier (which would make for better racing) … or whatever.

I’m going to try and trust the body as a whole on this and look forward to next year. It’s not like we haven’t had plenty of good racing this year.

My guess is that next year is going to be like every other year. Some races will be fantastic and others will be super awful, but maybe the new rules package will change things up a bit.

“What can happen to Stewart if the grand jury thinks there is enough evidence to take him to trial? Will he still be able to race?” Reese

I would think not considering how a grand jury indictment tends to work. If the grand jury indicts Tony Stewart, criminal charges will be filed and Stewart could potentially be arrested. Depending on the judge and other proceedings surrounding the case, Stewart could either remain in jail or be released on bail. Even if he were released until the trial date, it is unlikely that he would still be able to race as he would be expected to remain in the area until his court date.

I can’t say whether or not that’s likely though. I was honestly surprised that the case went to a grand jury at all. Frankly, I’m surprised Stewart returned to the car while the investigation was still ongoing.

I’m sure it’s tough on Stewart. It must be difficult enough living with the guilt, let alone having potential criminal charges looming over his head. Only Stewart knows what really happened that night, but I can’t imagine that it’s easy.

“Hey Summer, so a friend of mine told me that NASCAR was going to have all the Chase races online for free. I told him he was crazy, NASCAR would never do that, he must have just seen someone else’s videos since I know sometimes fans put the races on their own page. Did I miss something or is my buddy just blowing smoke?” Gabrielle

NASCAR has more than just the Chase races up for free.

In fact, on their YouTube channel, NASCAR – yes, NASCAR, not some fan trying to provide free content – has eight full-length Sprint Cup Series races already uploaded. The eight races are actually the last eight races of the season, dating back to the second Pocono race. Yes, they are the full races, are free of charge, and NASCAR will keep adding the races to the page through to the end of the season.

No word on whether or not this will continue into next year, though if it proves to be a success, I wouldn’t be surprised a “2015” playlist was added to NASCAR’s channel.

To view this phenomenon for yourself, go to NASCAR’s YouTube page and go to the playlist that says “Full NASCAR Sprint Cup Series playlists – 2014”.

And enjoy all the races … you’ve probably already seen.

“So do we get to go through all the clinch scenarios after each round or are we just following the points this time?” Asa

Oh don’t you know it! I’m sure you can expect a similar rundown after each round ends, but, yes, there are several clinch scenarios that determine who moves on to the Contender Round.

It goes without saying, but Brad Keselowski and Joey Logano have already advanced by virtue of their wins.

The following drivers can control their own destiny with the corresponding finishing position:

Kasey Kahne: 2nd or better (must lead a lap)

Ryan Newman, Denny Hamlin, Greg Biffle, and Kurt Busch can only clinch a spot by winning (with the same option extended to the other drivers, of course).

Otherwise, they have to rely on other teams to have a poor finish.

Now, for those who don’t know, if Allmendinger finishes, say, fifth, he will likely still advance, but his advance is dependent upon where someone else finishes. If he finished second or higher (obviously), he is guaranteed to move to the next round, no matter where everyone else finishes. The finishing positions listed above doesn’t mean that a driver has to finish there. That number just means if they finish in the stated position or higher, they have clinched a spot in The Contenders Round, period.

You’re right, it really is easier to just wait until the end to see where everything shakes out. But where is the fun in that?

1) I really wish Summer understood cars better too, or at all. 2) Everything Summer stated about the Grand Jury is wrong. If he is even indicted, trials can take forever just to be scheduled. So, bail will be set and Stewart will post it. He is not a flight risk, so he will only be required to return for Court proceedings. He will not be required to remain in the area. Finally 3) BillB asked a few months ago where the Mailbox questions come from and how does one submit one. There was no answer leading me to suspect that Summer makes up softball questions and then lobs them at herself.

Thanks for remembering John Q. I tried sending that question to the “contact us” mailbox in addition to asking at the source (this column). I never got an answer and just gave up. On the grand scheme of things, what do I care. Besides there are plenty of websites where I can pose a question (and Frontstretch is one of them) where fans will give better answers than the writers.

Unless Tony says that he meant to run over that boy, racing fans better hope that he’s not found guilty. We have no idea how a guilty verdict would impact racing.

I too sent Frontstretch a question two weeks ago about how to submit questions. I got no reply. Does Summer make them up? Nobody is saying.

Do you think that if Summer had a show on talk radio the phone number would be unlisted?

You have to remember that this is being written by a high school drop out that married a domino’s pizza guy so don’t expect much.

John, I think it would be more awkward to hear Summer faking the voice of the caller.

Perhaps the best course of action is not to read or comment on this particular feature since it’s validity is questionable. What’s the point if no one that actually reads and comments regularly can find a way to pose a question. I may start skipping this one every week.
Boycott nascar mailbox…LOL

Less down force means less aero push means more puker butted drivers means more brass ones racing. That’s all you need to know about race cars.And, personally, I think that funny looking guy in the 43 could clinch a spot too by winning. Wazzis name?

His name is Aric Almirola. You won’t hear too much of him on this site even when he runs good. Aric finishes 6th, almost 5th as he went door-to-door with Johnson at the finish and he doesn’t get a mention. We did hear about how good Danica finished, (she has been running better but that’s not the point).