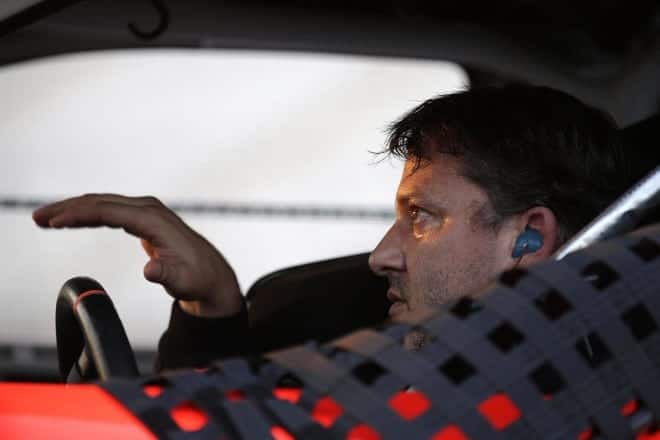 An Ontario County, New York, grand jury has cleared NASCAR driver Tony Stewart of any criminal charges. The official announcement came at 3 p.m. ET Wednesday afternoon, just over 24 hours since the case was first presented to them.

On Aug. 9, Stewart was racing a sprint car at Canandaigua Motorsports Park when he appeared to tangle with the car of Kevin Ward, Jr., sending Ward’s car into the outside barrier. Ward then exited his vehicle and approached Stewart’s machine as the cars circled the track under caution. Ward was struck by the right rear wheel of Stewart’s car and thrown several yards down the track. Ward was pronounced dead at a local hospital shortly afterward. There was some speculation that Stewart had intentionally steered toward Ward as he walked across the track, or tried to throw dirt off his rear wheels toward the other driver.

According to Ontario County District Attorney Michael Tantillo in a press conference that aired on both ESPN and FOXSports1 and local stations, the grand jury, after seeing evidence which included enhanced video of the incident between Stewart and Ward, documents and photographs and two dozen experts and witnesses, quickly cleared Stewart of criminal wrongdoing.

According to toxicology reports, said Tantillo, Ward had marijuana in his system at the time of his death, and the levels indicated were high enough to impair his judgment that night. The grand jury declined to charge Stewart with either second degree manslaughter or criminally negligent homicide, the two possibilities with which they were presented.

“The videos were examined in detail… The videos did not demonstrate any aberrational driving by Tony Stewart until the point of impact with Kevin Ward, at which point his vehicle veered to the right up the track as a result of the collision.” said Tantillo. “Prior to that, his course was pretty straight.”

Tantillo went on to explain that, while the grand jury was not tasked with finding fault with anyone other than Stewart, “I am sure, from their deliberations and discussions that the fact that Kevin Ward was observed running basically down two thirds of the track into a hot track in the middle of other cars that were still racing, played a big factor in their decision.”

According to Tantillo, one major reason that the case was sent to the grand jury because of varying statements or lack of statements from several witnesses. The hearing allowed those witnesses to be subpoenaed in order to get their testimony under oath.

What this means is that the grand jury, made up of a group of citizens, has determined that there is not enough evidence of any criminal activity or intent to proceed with charges or a trial. Stewart will not face a criminal record or any related imprisonment or fines. He could still face a civil trial if Ward’s family chooses to sue him for wrongful death, and if found guilty there, could have to pay a sum of money to the family in retribution. A civil lawsuit could also be settled out of court if both sides agree on a monetary amount to be paid to the family.

Following the incident, NASCAR issued a mandate to drivers to stay in their cars after a crash to avoid a similar incident.

I was hoping that a thorough review of the matter would produce no evidence of anything other then a tragic accident. Still, it must weigh heavy on Stewart’s mind.

This isn’t going away. I’m not surprised with the final verdict and I agree with it. Obviously Kevin Ward’s father doesn’t. Now comes the civil suit. I am guessing that TS might never be the same again. He may come back and be a successful racer but I doubt he will be as nasty as he could be in the past. And that could be a good thing for everyone, most of all Tony,.

Of course this is not going away Tony Stewart, will have to deal with this every night when he puts his head on the pillow, you and I can go to bed and say it shouldn’t have happen but he’ll have to live with it, Tony Stewart is a take no prisoners type of racer he just happens to be in a sport that if you do not have that attitude you will not win, apart from that don’t forget about all the people that Tony Stewart is helped how many times has he said his airplane across the United States to pick up a kid and flying to a hospital and fly the parents back and forth how many times has he given away of himself financially and physically to help other people, yes Tony and his Sprint car hit Kevin but don’t forget what I have said repeatedly Kevin committed involuntary suicide, and Tony is being forced to deal with that,So when all you armchair racers have nothing else to do that has never sat in one of those things whether it be a taxicab racer or a Sprint car try to understand the other side of the story.

If the grand jury investigation was not through, you must be reading a different report. Would the kid behavied differently if he wasnt impaired with dope? We will never know but dope doesnt belong in dangerous auto sports or anywhere else. A product of our new generation I guess.