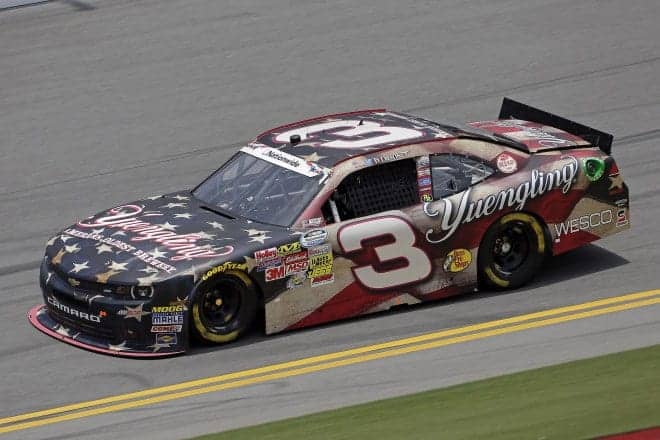 On Wednesday, Richard Childress Racing (RCR) announced that they have extended their partnership with D. G. Yuengling & Son, Inc, a Pennsylvania-based beer manufacturer.  As a result, the Yuengling Light Lager brand will continue to serve as a primary sponsor of Ty Dillon’s No. 3 Chevrolet Camaro in the soon-to-be Xfinity Series.  In addition, Yuengling will make their Sprint Cup debut next season, sponsoring the 22-year old at Pocono Raceway in a fourth RCR entry, the No. 33, in cooperation with Circle Sport.  However, the official release did not state which Pocono race that Dillon would attempt.

Team owner Richard Childress is very happy to have Yuengling back in the fold.

“We are thrilled to continue our great partnership with Yuengling and showcase their great products to NASCAR fans,” Childress said.  “We have enjoyed working with a family-owned and operated company with such a rich heritage and tight-knit culture. It’s something we mirror here at RCR. Yuengling is an iconic American brand and the brewery has produced a quality beer for almost two centuries.”

Dillon is also excited to continue his relationship with Yuengling.

“The Yuengling family has been a phenomenal partner and I’m honored to be a part of such a great family-operated company, just like we are here at RCR,” Dillon said.  “Dick, Jennifer, Wendy, Debbie, Sheryl Yuengling and all of their employees have given us an enormous amount of support. I’m looking forward to growing our relationship with all their distributors, retailers and loyal customers during the 2015 season.”

RCR’s 2014 deal with D.G. Yuengling & Son, Inc. was for eight races of primary sponsorship.  Seven of those races were on Ty Dillon’s No. 3 Camaro in the Nationwide Series.  In those races, Ty had five top-10 finishes with a best finish of sixth at Bristol in March.  The other was on the No. 3 truck driven by Austin Dillon in the Pocono Mountains 150 at Pocono Raceway in August.  Austin, a former champion, won the 60-lap Camping World Truck Series event.