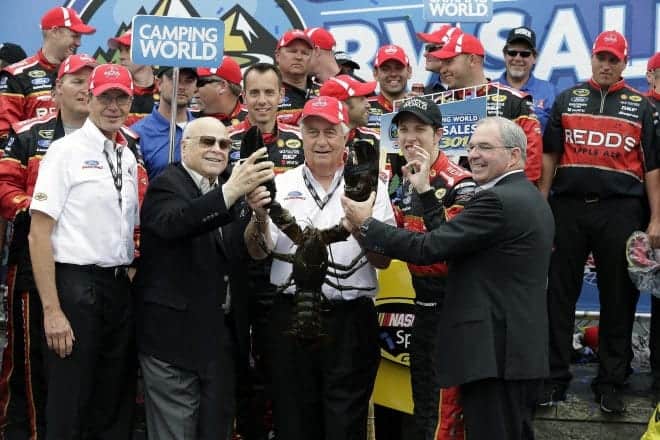 That’s how it’s seemed over the past few weeks – and perhaps rightfully so. Team Penske has been on a tear this season, the former champion Keselowski driving into Victory Lane more than any other driver in the series – including a win in the final race before the Chase, providing an exclamation point on the organization’s regular season.

Then came the first two races of the 2014 Chase, which Penske teams have continued to dominate. After Keselowski drove his No. 2 to a win at Chicagoland Speedway, Logano scored a followup victory at New Hampshire Motor Speedway last weekend. The team isn’t just firing on all cylinders right now. It’s combining all those cylinders into some sort of mega mecha-cylinder that’s nigh unbeatable.

In a time when getting into the Chase means having to worry about getting past an elimination every three races, Keselowski and Logano winning is incredibly important and comforting, since it enures both Penske teams’ entrance into the next round of the postseason and establishes them as the pair to beat.

Yet already, there are cries of champion placed next to both drivers’ names. Welcome sounds for those two, sure, but for others – especially those who still have one of the other 14 horses in the race – it can become aggravating. Oh, so taking names in the first two races automatically means they’re shoo-ins for the title, regardless of what came before (which, in their case, is still unarguably quite good)?

Well, no. But it’s very possible.

In the 10 full Chases since the format began in 2004, 13 different drivers have laid claim to Victory Lane in one of the first two races of the playoffs. Of them, five went on to win the championship, and two more finished second.

It all started with the first try at the Chase in 2004. Kurt Busch took his No. 97 home first at New Hampshire, which was then the first race in the Chase schedule. Busch went on to become the first champion of the format.

In fact, we’re talking an average championship finish of fifth among these drivers, with two outliers – Carl Edwards’ ninth in 2007 after winning at Dover International Speedway and Bowyer’s 10th in 2010 after a Chase-christening win at New Hampshire – bringing down the average.

But even when a driver wins one of the first two races of the Chase, it may not mean much – heck, while it’s never actually happened, he or she could be a non-Chaser who just happened to spoil it for the championship contenders in one of the first two races. And then even if they’re in the Chase and score that win, other setbacks, regular season or otherwise, can still have a driver so low in the points that the victory, while a boost of morale, ends up being a brief burst of light before fading. As such, it’s also worth checking out the points leader after race 28 and where they fare, noting whether peaking early can be a good thing or not in NASCAR.

At that point, things get a little foggy.

Through 10 seasons of the Chase, the average championship finish for drivers leading the points – as Keselowski currently is – is 2.9. Again, that’s with an outlier in Jeff Burton, who was on pace for greatness in 2006 (he won at Dover that year, too) but ended up seventh when all was said and done. Even then, that’s a highly commendable number.

However, it only includes one title.

That distinction goes to Stewart, who exited New Hampshire in 2011 with a slim points lead. Of course, he ended up losing the lead to Edwards, only to regain it in the final race of the season at Homestead-Miami Speedway, but the point stands: he was the leader then and he went on to win it all later.

The rest of that group is made up of an astounding number of runner-up finishes – five overall, including four straight (Jeff Gordon, Edwards, Martin and Hamlin) from 2007-2010.

To that end, no, it’s not unheard of to declare Keselowski and Logano as serious title contenders. But what gets tricky is that we’re looking at two different drivers here, and the obvious endgame Penske would prefer is having said drivers finish first and second for the title. Past happenings seem to indicate that one of them’s probably going to get that runner-up spot.

It’s just a matter of whether or not that trophy is hoisted by one of them at the end of the year as well.

Given 2014’s format change with the elimination rounds, the championship leader after two race’s struggle to hold on may become even more prevalent, since a bad race or two could knock one out completely rather than deal a formidable blow from which they can return.

It’ll remain to be seen what will happen in that regard until after Dover, when four are eliminated and 12 vie for the next eight spots, and so on and so forth. If Penske continues its major triumphs this season, chances are it’ll score at least a second, if not a first in the final standings. But if not, Keselowski and Logano will just be another statistic that warns against peaking early.

All media hype. The mindset of Penske or another team if they were in the same position at this time is focus. Members of Team Penske have repeatedly dismissed the hype and praise (see interviews) and their focus is clearly for the next race. No resting on laurels, it would be foolish to do otherwise. Everybody is well aware another 8 weeks of racing and things can happen for or against you in a instant. So far EVERYBODY seems focused and NOT taking anything for granted.

Or, since the points reset randomly in an attempt to set up a manufactured game 7 moment maybe it doesn’t matter who does what when until that last race. Then, the Championship will as likely be decided by a wreck caused by Johnny Nobody as the performance of any Chase driver. Live the lie Kevin. Hype that Chase like anyone cares.

I’ve said it before and I’ll say it again… the most important races in the chase, other than the finale at Homestead, are Kansas and Charlotte. Win one of those two and it buys you a mulligan for Talladega.

Personally, with the elimination aspect of the current chase format, picking a favorite before the final race is like restoring an old Ford Pinto…. pointless.

Kenseth won the first two races last and Biffle did the same in 2008. Neither won the title. Even more so under this format, you can go from hero to eliminated really quick. Penske is the favorite, but as long as Johnson and Harvick are alive in the Chase, its no guarantee.

Interesting, this base assumption that Penske is peaking. Really, they’ve been on-or-near the top of the heap pretty much all season. I’d say that they’ve been (Richmond #2 beatdown aside) +/- 5% of their current state at NH#2 for the majority of the season, with only a few statistical outliers. Those all being “racing luck” where things just didn’t fall their way on the strategy call, wreck, equipment failure.

As a result, I don’t see any reason to suspect they’ll be any more than that +/- 5% the rest of the year.

Title hopes? Really, that just about doing your thing, and (hopefully) they don’t get bit by something out of their control at the wrong time (IE, Aric Almirola at Chicago).

They’re just the least-likely team to self-destruct (x2), like Denny Hamlin at NH#2. That makes them the favorites, right? Least Likely to Lose due to self-inflicted issues?

A few years ago, someone said this of Joey: “He should learn to keep his mouth closed. He always looks like he’s smiling.” He also got called “Mr. Horse Teeth Mouth.” When asked to tell some surprises about himself, just before his 21st birthday, he talked about how much he played Farmville “That and I really do smile that much.”