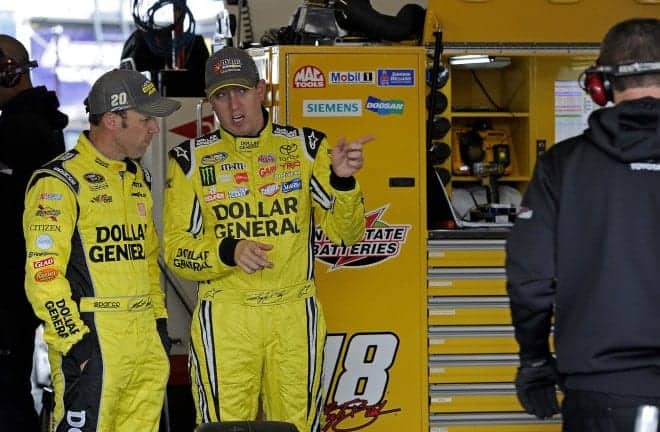 Hip hip hooray, NASCAR announced its rules changes for the 2015 season.  Or something.

The whole big hope is to mitigate the awful aero push that has transformed a number of tracks into circular parades.  The aerodynamic dependence of the cars, left unsettled by trailing in another’s wake, has become the bane of the circuit’s existence. Thus, by removing this aspect the cars should, in theory, be better able to pass.

The shortened spoiler, created by taking two inches from the current one, is the best way to handle this issue.  But the other aspects of the package are the interesting ones, and are sure to have dynos humming and engineers ripping through their SIMs programs.  They reduced horsepower, but via a spacer, rather than developing a new engine.  They also introduced roller lifters (stock on many auto in the late ’80s) into the engine to replace flat lifters, but that makes the engine more efficient and will add horsepower.

Add all of that up, and it’s difficult to know what really will happen.  And as Frontstretch colleague Mark Howell mentioned in an email: what about the in-car adjustable panhard bar?

So here’s where all of these changes don’t make sense: No testing.  Hm.  NASCAR brings a whole slew of changes to the field and then tells everyone not to go out and see how they really work.  Driving a racecar, at its basics, is elementally the same, but these changes are all something that should be given a couple solid going-overs.  But nope.  The move is probably made in a way to appease the RTA, yet it just feels a little assbackward, or is that backassward?.  Ah, NASCAR.  The teams are still going to spend the money, just in their labs rather than at the track.

Happiness Is…Kyle Busch.  Kyle Busch is a difficult character to understand.  He’s got oodles of talent.  He beats up on the Nationwide and Truck drivers too much.  He gives to charities.  He’s a hothead and an ass.  He’s a loving husband.  Something about him being an ass.

The thing with Busch is that there’s no middle ground.  People tend either to be a fan or to want to see someone put him in the fence.  When he wrecks, people often cheer (tsk, tsk).  And for what feels like ages now, the question that has hovered over him is, when is he going to mature?

Let’s hope never, because he’s way more entertaining as is.  That aside, it should be noted that Busch showed a rare sense of resiliency at New Hampshire last weekend after tangling with Matt Kenseth and being tagged by Kasey Kahne as a result.  A strange thing happened: he kept himself together and drove that battered No. 18 ride to an eighth-place finish.  He’s now sitting pretty to get into the next round.

Of course, with Kyle being Kyle, there’s always a chance he’ll have some kind of meltdown at Dover and make things a lot more difficult. Don’t go changing.

Happiness Is…AJ Allmendinger.  He slipped into the Chase with his win at Watkins Glen, and in doing so essentially punted Marcos Ambrose from NASCAR.  (Sure, Ambrose may likely have been going anyway, but a Chase berth would have changed the fortunes of his team and further helped the Petty organization).  But nothing was expected of AJ Allmendinger once the Chase began because he drives for the lesser-funded JTG Daugherty Racing one-car operation.  Then again, not a whole lot was expected from him after he broke the NASCAR substance abuse policy.  Yet here he is.

He did his penance, served time in both IndyCar and the Nationwide series and landed what many would not consider to be a plum ride in the No. 47. The big surprise is that he does have a decent shot of moving to the next round of the Chase.  Sure, the guts of his car are from Richard Childress Racing, but they haven’t been all that great this season, so if Dinger were to make the second round, it might be one of the better surprises of the season.  And the additional exposure (read: $$$) could surely help a team like his.

Happiness Is…Jobs.  With ESPN dropping its NASCAR coverage for next year (though it’ll still be handling some of the IndyCar races), there will be shake ups for many of its personnel.  If you remember, Terry Blount, one of ESPN’s former website writers, moved from NASCAR over to covering the Seattle Seahawks.  Ryan McGee has taken on more college baseball and college football coverage while continuing to dip his toes in the NASCAR pool.  Hence, the organization seems to be keeping some of its writers around – but what of the TV people?

Well, that transition is beginning to happen.  Jamie Little, the first female pit reporter – with possibly the most perfect ponytail in the world -recently found a home with FOX, which will give her the opportunity to cover her first Daytona 500 in live format.

Why get happy about the media sloths finding homes and whatnot?  Because they’re part of the NASCAR family, and with the uncertainties that now reside with journalism and broadcasting, their employment can give a sense of hope.  But about those Waltrip brothers….

Happiness Is…Dover.  Dover has been a tough track to like of late.  When the Car of Tomorrow came out (does that make it the C.O.Y. now – Car of Yesteryear?), the improved toughness, boxiness and generally lame styling (remember the wing?) made tracks like Dover less fun.  That it could sustain a little bumping and still perform decently brought a new challenge to things.  Then throw in Jimmie Johnson’s dominance at the track (hasn’t he won like 34 races there?) and Dover became a bit of a bore.

But if Chicagoland and New Hampshire have shown anything about the 2014 Chase, it’s that even tracks considered boring can produce some interesting racing.  With Johnson a little bit off his game (it seems like he hasn’t quite adjusted to the Gen-6 ride yet), and drivers in Chase spots eight through 16 separated by 12 points, there’s a good chance that the race at Dover continues the trend.  And these cars don’t seem to hold up as well as the previous one.

Happiness isn’t this inane column. What exactly is it that you find entertaining about having a pouty immature self absorbed entitled millionaire asshole around at all let alone one that has helped rob the fans of the enjoyment of both the NW and truck series. And thank the Lord for AJ, another whiny entitled clown. With racing trying so hard to be baseball, football, and basketball AJ lets us have a substance abuser of our very own. Out of touch with the actual hardcore fan base much? Maybe you should go back to waxing poetic about soccer.

Look out world, someone piddled in JohnQ’s Cheerios.

No testing is great news for Hendrick. Teams with the most money and best equipment will do good.

JohnQ… AJ took Adderall, not crack. He admitted his mistake, paid the price for it, and never complained about it. And though I’ve never once heard him whine, hey, maybe I missed it. Is there such a thing as second chances in your world? Geez…

How bout the DUI, wasn’t that the second chance?

Technically the DUI was the first chance since it occurred in 2009, three years before the Adderall incident which occurred in 2012. Both incidents occurred prior to Allmendinger’s completion of Nascar’s Road to Recovery program. Since then, as far as I know, he’s kept his nose clean. He’s certainly no saint, but I’ll give him the benefit of the doubt for now.

I almost wish NASCAR had allowed the teams below 20th or 30th in points to test. They’d probably get a lot of support from the big teams and maybe even let them finish often ON THE LEAD LAP! That would probably also help with the targeted “parity”.

Nice to see Mr perfect johnq still gets the interweb in his hate bunker. As for the c.o.t. how bout calling it the car of yesteryear

Name calling is what one does when they have no logical argument. Disagree with me I’ll be glad to listen. I’ve been wrong before, even admitted it on this site.